Sensations which seem to come from limbs that had been amputated are called «phantoms». Most limb amputees report awareness of a phantom limb, i.e., the perceived presence of the missing arm or leg. Phantom sensations may also occur after the removal of body parts other than the limbs, e.g. after amputation of the breast, extraction of a tooth or removal of an eye. Phantoms are not a pleasant experience: 75% of amputees complain about phantoms being painful, about 61% reported residual limp pain, i.e. pain in the still present portion of the limb close to the amputation line and other described non-painful sensations, such as tingling sensations, thermal perceptions or telescopic distortions, i.e., the sensation that the phantom has changed its length, most often shortened, over time.

Phantoms have been known for centuries. Ambroise Paré (1510-1590), the famous French surgeon, had a patient suffering from phantom limb in 1551 and in latter centuries, René Descartes also mentioned cases of phantoms in amputees. Descartes used the phenomenon to support the unity of the mind in comparison to the fragmented nature of the body. One of the most comprehensive analysis of phantoms was carried by the surgeon Silas Weir Mitchell (1829-1914) during the American Civil War. After the Battle of Gettysburg, his hospital, located at South Street in Philadelphia, was filled with wounded soldiers. Since many of them had to be amputated, the soldiers called it «Stump Hospital». Mitchell noted that 86 of 90 amputees that he examined in his service developed “sensory ghosts” and he coined the term phantom limbs.

All sufferers from phantoms feel their life is handicapped but we can understand that this effect will be maximized in an artist when not only his ordinary life but also his work and his vocation are severely affected by the amputation. Paul Wittgenstein (1887-1961) 1was a pianist, brother of philosopher Ludwig Wittgenstein and son of Karl Wittgenstein, a steel, banking and arms magnate that rivaled the Rothschilds for the distinction of being the largest private fortune in Europe. The house of the Wittgenteins was frequently visited by prominent musicians including Johannes Brahms, Clara Schumann, Gustav Mahler, and Richard Strauss.

At the beginning of the First World War, Paul was drafted into the Austrian army and his right arm was injured during a patrol near Zamos in Poland. He was then taken prisoner by the Russians, and his right arm was amputated. He remained two years in a prisoner-of-war camp in Siberia where he decided to continue his career as pianist using only his left hand. He sent a letter to his old teacher, Josef Labor, asking for a piano concerto for the left hand. In the next years, different famous composers including Benjamin Britten, Paul Hindemith, Alexander Scriabin and Richard Strauss produced pieces for him and he composed some of his own too. The most famous was the Piano Concerto in D-major for the left land by Maurice Ravel. Ravel dedicated time and effort to this commission and he even studied music for the left hand such as the Camille Saint-Saëns’ etudes. Although he clearly did it to help Wittgenstein and other amputated pianists, he —a life-long smoker— joked that he had always intended to write a concerto for left hand in order to be able to held a cigarette with one hand, while playing the piano with the other.

Wittgenstein was not an easy-going artist. Ravel’s concerto had a difficult trajectory. The premiere was performed with the Vienna Symphony Orchestra but Wittgenstein was not inspired by some of the jazz-inspired movements and he deliberately changed parts of the score. As a result, Ravel was outraged and he never again talked to Wittgenstein. Paul Wittgenstein also approached Sergei Prokofiev and requested a concerto. Prokofiev agreed and wrote the Piano Concerto No. 4 in B-flat major for the left hand but Wittgenstein said that he was not prepared to play it until he appreciated its inner logic. That time never came. Finally, he got a composition written for him by Paul Hindemith and he hid the score in his study and it was not discovered until 2002, when both Hindemith and Wittgenstein had been dead for decades.

Wittgenstein’s case is interesting for neuroscientists since his is one of the best documented cases of a moving phantom phenomenon, a mixture of illusion of movement of the missing limb and voluntary movement of the stump. One of his students, observed how he did it:

Moving phantoms can take the form of involuntary movements that correspond to a type of cramp. Sometimes, they «move» the phantom limb into painful positions and they can also manifest as voluntary movements of the stump of the missing limb, as was the case for Wittgenstein. 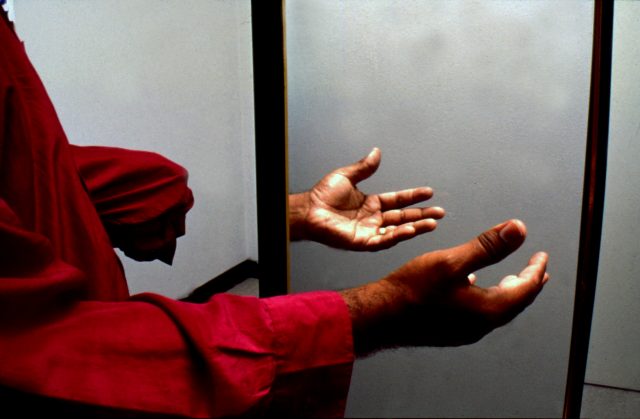 It has been classically considered that representations of the human body in the brain were fixed. The origin of phantoms seems to be related with neural plasticity. Neuroimaging studies have demonstrated a function remodeling of the sensory-motor cortical representations of the missing and intact limbs. Ramachandran 2 has shown that striking reorganizations in body image occur very rapidly —within forty-eight hours, and possible much less— following the amputation of a limp. He has used a simple “virtual reality” device, a box with a transposing mirror that reflects the intact limb and seems to show the missing limb side by side with the remaining one. The normal look of the missing arm (the reflected image of the surviving limb) competes with the feel of the phantom. The first effect of this is that a deformed phantom may straighten out, the pain can be extinguished and, eventually, there may be no more phantom at all. Ramachandran called it «the first successful amputation of a phantom limb».