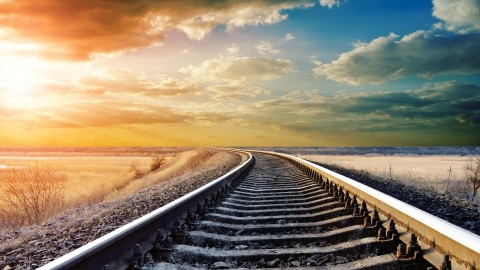 In lay people’s minds, railway lines are composed by rails and wooden sleepers on a bed of stones. These medium-sized stones are called ballast, and it is true that they are the most common material to lay the track on; at least when you are not building it in a tunnel or a bridge, where rails are usually fastened onto concrete slabs. In fact, wooden sleepers are no longer used, in new railway lines, but concrete ones with much more resilience and less maintenance costs. But ballast keeps being used, as it combines low material and installation costs with moderate maintenance costs, including well known stiffness and damping properties of the trackbed. Yes, it includes a high amount of damping, as the friction between the ballast stones dissipates energy, while it wears them slowly into more rounded round shapes.

The problem with the ballast is that it is relatively free to go where it wants. After installed, a track always settles a little, ballast being a granular media. But it can also end up out of the track by, for example, extreme weather conditions such as heavy rains. Even wind could take them out of their place, if it was strong enough. But then, it is a railway: we are running trains on top of it, high speed trains that artificially generate extreme wind speeds very close to the track. These speeds of more than 250km/h end up picking up some ballast stones and launching it somewhere else. This is known as flying ballast or ballast pick-up, and it is a problem because, first, it erodes the trackbed (it is known as BTE: Ballast Train-induced-wind Erosion); but a “flying solo” ballast stone can also damage both train components and the railhead. And the section of a high speed train under the carbody floor is usually packed with auxiliary equipment, like traction electronics or AC components. We don’t want regular impacts of stones on those.

The main problem is that railway operators want to increase train speed as much as they can, but the limitations of ballast pick-up don’t let them, ending up with lower capacity in the line. Researches from Universidad Politécnica de Madrid have tried to look into the problem from the perspective of railway authorities 1: what will happen when a new train is put into service in their high speed line? Is it possible to develop standard procedures that will allow the definition of tests aimed at determining the BTE effect caused by new trains?

Ballast pick up is a complex phenomenon where the initiation mechanisms are different from the ones that force the stones to fly 2. There might actually be rolling ballast without having flying one. The authors tried then to split the theoretical problem in two simpler problems: first, they studied the aerodynamic properties of a wind gust, which depends on the shape of the sensor element used to measure wind loads, and the flow generated between train and track, but does not take into account ballast properties, placement or surrounding ballast stones. The second part accounts for the capacity of the ballast stone to resist the force by this wind gust, and in this case it is dependent on the mass and inertia properties of the stones and their relative position.

Navarro-Medina et al. develop a theoretical model and perform on-track measurements to validate it. They model it as the effect of a wind gust on a stone, where there is a pressure threshold where the stone starts to roll on their trailing supporting point. The most isolated or the smallest stones are the ones that will start moving. If the gust is long enough, the stone will reach a point where the centre of mass is placed in line with the support point, and if it keeps on moving the centre of mass will start descending, accelerating due to gravity and, maybe, impacting against other stones and starting other movements, eventually starting a stone-jumping process. The problem is, how does this translate into vehicle requirements? In order to be valid for any ballast type and train, the analysis is performed for an ideal element fixed to the floor until the movement starts, and adimensional parameters are used along the whole analysis.

In order to complement and validate the model, experimental measurements were performed in the Barcelona-Madrid high speed line. In order to study the effect of the flow generated by the train on the ballast, a standard body was placed on the track, between the rails. This body is cylinder shaped, with two different cross sections so the influence of the shape can be studied, and has integrated sensors that measure the pressure load due to the flow. Sleeper acceleration and wheel passing instant was also measured. One great conclusion from the measurement campaign is that each type of train has its specific wind pressure signature, very consistent amongst the different trains of the same type. It happens to occur in all the different measurement channels of the experimental setup, also. With these results, a relation between the type of train and the type of gust that will be exerted on the ballast is obtained, and eventually translated into a curve of the wind impulse as a function of the adimensional weight of the ballast.

This latest result is a great step towards standardization of BTE into vehicle validation processes, and could potentially save much time and resources: knowing this relationship, train manufacturers can develop train geometries that minimize the gusts that initiate ballast pick-up. Anyway, if you are a trainspotter, beware of frying ballast when looking at high speed trains.

The comfort of modern trains

Evolution, faster than anybody thought