Trains have a huge seasonal problem each autumn: leaves. Yes, leaves from the trees. And now they are testing a solution: laser beams! It sounds absurd, but it will all make sense after we get into its science. 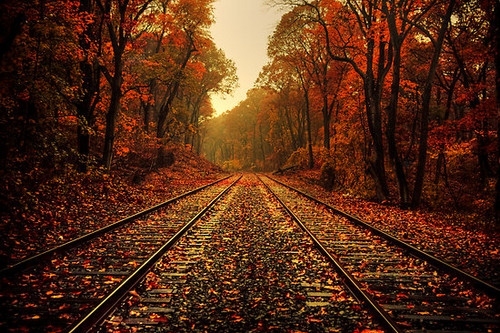 Every autumn when leaves fall off the trees and beautifully cover parks and streets, railway infrastructure managers get extremely worried about it, as they become a safety issue. When leaves are run over, the huge pressures in the wheel-rail contact squash them and bind them to the metallic micro-structure of the rail, generating a tarnished surface of impurities whose characteristics are close to those of Teflon: very low friction values 1, 2 and low electric conductivity 3. These characteristics bring up two very distinct problems that might be very dangerous for the railway system.

First, rail vehicles are amongst the most energy efficient means of transport because of the low friction values on the wheel rail contact. But a drop up to the levels of a non-stick coating is way too much, and it becomes a safety issue when braking: the longitudinal braking force must be transferred to the rails via the contact patch, and a very low friction coefficient allows very little longitudinal force before becoming saturated and start sliding, turning braking distances in several kilometres long. It can also be a problem while accelerating the train, as a very low adhesion will easily slide and waste power. For this purpose, the most common solution is to blow sand in front of the wheel, so that the impurities allow a greater tangential force transmission, at the cost of degrading both wheels and rails.

The second safety issue is that railway signalling systems rely on the electric conductivity of the running gear: when both rails are electrically connected the signalling system knows there’s a train in that section. Whenever a low conductivity third body appears between wheel and rail, both rails they become electrically isolated and the signalling systems thinks there is no train in the section. This has very serious safety implications, as previous signals will turn green for upcoming units, which will not be able to brake in time in order to avoid collision for two reasons: the locomotive driver will apply the brakes very late, when he makes eye contact with the train in the section; and the adhesion levels in the rail will be extremely low. Remember: the same black layer that isolates the rails also reduces drastically the friction available for braking.

The usual way to deal with the black layer is to grind the rails: polish them with a rough surface and remove a fine layer of metal. But this has other implications: it needs to run a maintenance unit on the tracks, closing those sections for regular traffic; and removes material from the rail, shortening its total life. And here is where lasers come into scene.

Lasers have been used for cleaning for a long time. The process is known as Laser Ablation and was initially used for transforming the properties of the material in order to create specific coatings 4, not actually vaporizing it. But it is very useful for the purpose of cleaning dirty surfaces because the properties of the laser beam can be tuned so that we can target only the debris and not the actual object to be cleaned. In the railway case, the black layer absorbs all the energy the laser emits; in turn, the metallic rail reflects it, leaving a clean and undamaged surface. The system was built in the late nineties and turned out to be exceptional at performing its job, as you can see in the following video of their laboratory tests.

In 1999, Network Rail (UK infrastructure manager) tested it for its use in their network with very bad results: track irregularities induced a very high vibration level on the train which did not allow the necessary focus so that the laser could target the actual rail for the necessary time 5. The operational speed of the vehicle was also very low, below 40km/h. They decided to use high pressure water jets instead, which are a much easier technology to implement but, in turn, damage the rails in a way similar to rail grinding, reducing their total lifetime.

What the Dutch Railways are prepared to test is the same solution that was proposed back in the late nineties, but with improved characteristics that make its use viable. Now the vehicle can run up to 80km/h, the system is much more precise, and is automatically disconnected when the ride quality is below the sensitivity threshold. This allows the rail cleansing method to be mounted on both maintenance vehicles and low speed locomotives, giving extra flexibility in operations to vehicle operators and infrastructure managers.

You could think that a small brush to take away the leaves before they’re crunched would suffice, but rain and mud make them stick so well that the black layer is unavoidable. Let’s overkill and use lasers instead!

When gnomes sit on rails

Stable independently rotating wheels? Just turn them inside out