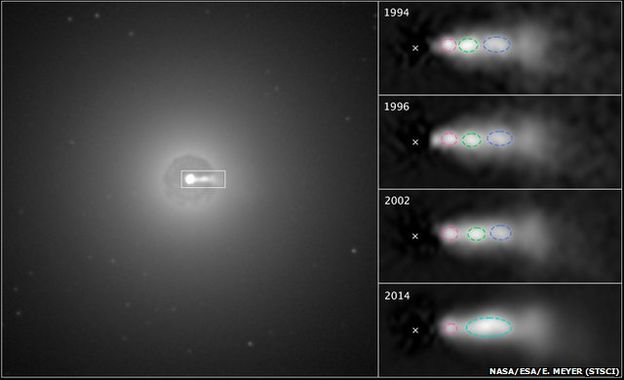 A black hole in the galaxy NGC 3862 has ejected two jets of plasma that knocked into each other like billiard balls, all caught in images by the Hubble Space Telescope over the course of 20 years.

Scientists have discovered a previously unknown property of graphene that, under the right circumstances, could allow for the creation of a sunlight-powered rocket. The discovery involves so-called graphene sponges — layered structures of the carbon-based material that move when subjected to laser light.

Blocked memories may be retrieved in mice

Blocked, or “lost,” memories were restored in mice when memory-encoding neurons were stimulated by light pulses, raising researchers’ hopes of one day restoring memories to people with retrograde amnesia common in those with traumatic brain injury or other brain disorders.

Debate over whether dinosaurs were warm- or cold-blooded

Dinosaurs may have been warm-blooded, according to research that revisited a study done last year. The study focused on dinosaurs’ growth rates and the idea that dinosaurs evolved into today’s birds, which are warm-blooded, suggesting that their forebears were also warm-blooded.

An examination of the DNA of modern people has determined that early humans left what was Africa about 60,000 years ago using a route through Egypt rather than Ethiopia, as other scientists have suggested.