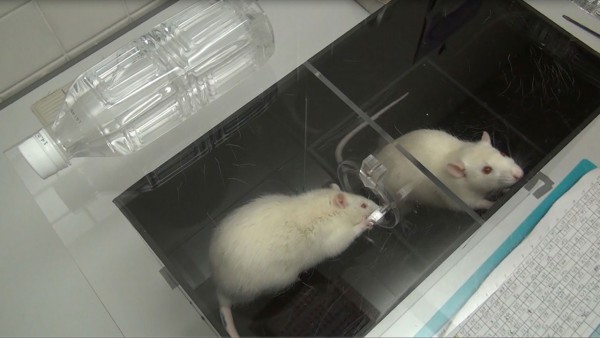 Altruism is a basic principle in many cultures and religions: do good deeds to other persons without expecting a reward or even if it is detrimental for you. However, it is not exclusive to human beings: ant workers abandon their own reproduction to serve the queen, vampires spit up part of the obtained blood to help a hungry neighbour, even the slime mold, where part of the ameboid cells form the stalk of the reproductive structure helping the rest to disperse their spores but losing their possibilities to pass on their own genes.

Prosocial behaviour benefits other individuals and establishes a basis for cooperation, learning and other group activities. Helping is one of these prosocial behaviours and recent studies have demonstrated that rats can exhibit it. This is important since it was previously considered that the distinction between oneself and others was a requirement for these behaviours and thus it was mostly limited to primates.

Nobuya Sato and his group from Kwansei Gakuin University have studied1 whether a rat would help another rat that is under stress. Experiments were carried out using a cage that has a pool area and a ground area separated by a door that can only be opened from the ground area. There is a third area adjacent to the ground area that is only used in some experiments. Rats show a tendency to avoid water.

Experiment 1a. Would a rat help a cage mate that is in a distressing situation? A rat (the soaked animal) was placed in the pool area of the cage —rats hate to be forced to swim— whereas the other rat (the helper animal) was placed in the ground area. The soaked rat could only gain access to the dry and safe area in the cage if its cagemate opened the door for it. Nine helper rats of the ten pairs used in the study showed door-opening behaviour over the 12 sessions done. The latency to door opening decreased over the sessions, the helper rat opened the door to rescue the soaked rat faster and faster. Conclusion: when one rat is drowning, the other rat put out a helping paw to rescue its mate.

Experiment 1b. Is the response faster if the helping animal has prior experience of exposure to the distressing situation? The rats roles were reversed, with the rat that helped the first time becoming the soaked rat and vice versa. The result was a decrease in the latency of the door opening, i.e. the previous soaked rat learned to open the door faster than the helper rats in the 1a experiment. Conclusion: if the rat has suffered the same situation before, it is much quicker at helping its cage mate. It is also possible that learning about soaking as an aversive experience enhances a helping behaviour, similar to an incentive learning paradigm.

Experiment 2. Would be the same result if the partner rat is not in a distressed situation? In this case, the demonstrator rat is on the ground, the helper is in the adjacent chamber, no pool at all. Out of the eight pairs of the rats used in this part of the study, only one helper rat showed door-opening behaviour over the 12 experimental sessions. Conclusion: the rats did not learn the door-opening behaviour when their cagemate was not in a distressed situation and that a cage mate being distressed is necessary to generate the helping behaviour.

Experiment 3. Would the rat prefer to help the distressed buddy or go for its own reward? This is a choice experiment. The helper rat has to decide whether to open the door to help the soaked rat or move to the third chamber where it has six pieces of chocolate cereal. The shaping of door opening behaviour may influence the results; so in half of the rats door opening was shaped by helping and in the other half shaped by a food reward. Rats whose door-opening behaviour was shaped by helping usually opened the door to the cage mate first and the rats whose door opening was shaped by the food rewards also opened the door to the cage mate first in half of the test trials. These results suggest that for all rats (those that learned door opening to obtain food rewards as well as those that learned it to help the cage mate), helping a distressed cage mate has a higher value than obtaining a food reward, even if it is chocolate!

Empathy is usually divided into two major subcomponents: cognitive empathy and affective (emotional) empathy. Cognitive empathy is the ability to understand the thoughts, feelings, and desires of other individuals, and emotional empathy is the ability to share the emotional states of other individuals. The empathic process observed in the study by Sato and colleagues falls into the category of emotional empathy and this study demonstrates that there is an evolutionary basis for helpful behaviour, independent of culture or upbringing.

I see your pain

Chimpanzees know which tool will be effective