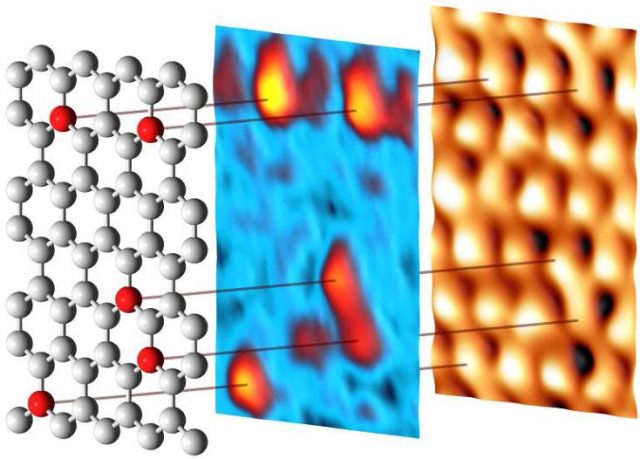 By substituting carbon atoms with nitrogen or boron, it is possible to turn graphene into a semiconductor of n- or p-type, respectively. The modifications of the electronic structure induced by the impurities greatly increase the possibilities of using doped graphene in nanoelectronics, in oxygen reduction reactions occurring in fuel cells, batteries, supercapacitors and many other applications. As compared to nitrogen, boron can be embedded in graphene at higher concentrations that give broader opportunities to tune its properties. This makes boron-doped graphene (B-graphene) a unique and very attractive material from both the fundamental and the practical viewpoints. We know that the structure of B-graphene is governed by the synthesis method and conditions, and postgrowth treatment as well, but currently it is not well-known.

Now a group of researchers, that includes Mikhail Otrokov, Andrés Arnau, Evgueni Chulkov from Materials Physics Center CSIC-UPV/EHU and DIPC, coordinated by Ikerbasque’s Denis Vyalikh, currently at Dresden University of Technology but joining DIPC next year, has presented1 in ACSNano a comprehensive study of the structural organization, from large scale to local environment of foreign atoms, of B-graphene.

The researchers used a method which has become key for large-scale graphene growth on a wide variety of substrates, chemical vapour deposition, to grow single-layer B-graphene from carborane molecules on Ni (111) and Co(0001). The used a broad variety of surface-sensitive methods to study the structure of boron impurities during the synthesis.

The results confirm that the impurities do substitute carbon atoms in the graphene lattice, thus affecting the orientation of graphene domains. One important conclusion is that it is possible to substitute up to 19% of the carbon atoms with boron using this method. There is one caveat, though. B-graphene on the Co(0001) surface may be grown better oriented on the large scale for boron concentrations up to 15 %; still its honeycomb lattice is strongly distorted on atomic scale, similarly to what happens with the B-graphene/Ni(111). It is at low concentrations (< 5%) that B-graphene is well-oriented on Ni(111).

These results represent an important step towards the knowledge of the behaviour of doped graphene, which may help find applications of graphene in the next generation of electronic devices.