Laziness, sloth or indolence is, depending on who you ask, a sin, a psychological characteristic, or a basic human right. It is usually used as a pejorative and is considered a disinclination, a personal choice where one the lazy person decides not to carry out an activity despite having the ability, the time and the means to do so. Instead of doing what is expected, the individual carries out that activity without dedicating much effort, or engages in some other task, less strenuous or less boring, or remains idle. In summary, a person is lazy if her motivation to spare herself efforts surpasses the motivation to do the right thing or the expected thing.

Religions condemn laziness, considered both a physical and a spiritual apathy and they judge it to be punishable and immoral both against God and against Humanity. Society is critic with procrastinators and all not enthusiastic about virtuous activities such as work, being considered as parasites.

Laziness can be identified by the own slacker or by third persons. A 1931 survey of secondary students found that when confronted with bad results, they attributed it to laziness whereas their teachers considered «lack of ability» as the main problem, with «indolence» coming second. Laziness is different from avolition, a negative psychological signal of certain mental disorders including depression, ADHD, insomnia, and schizophrenia.

If one thinks about the contrary of laziness in the natural world, it is possible that many persons would mention the hard-working ant societies. Social insect colonies are often considered to be highly efficient collective systems, with a division of labor, worker specialization and high cooperation as pillars of their ecological success. However, many entomologists studying social insects are used to see that many workers, not honoring their name, stand around doing nothing. The literature is filled with reports of >50% of workers in colonies being inactive across all social insect taxa including bees, wasps, termites, and ants.

Daniel Charbonneau and Anne Dornhaus from the University of Arizona studied a population of Temnothorax rugatulus, a species of ant frequently found in the forests of the western United States 1. Charbonneau and his coworker marked 250 workers from five different colonies and recorded their behavior at intervals over three days in a lab setting.

The research group found that a substantial number of animals seemed to be specialized in doing nothing. The level of inactivity was consistent for individual workers, i.e., it is not that workers take turns, but there were very active and very inactive ants. They found that almost half of the studied workers spent most of their time apparently doing nothing. Whereas other workers were busily foraging, building the nest or taking care of the brood, these ants do not show any kind of activity. It was observed that they were not taking a break from the previous activity but apparently they were an idler cast. Workers within colonies can often be separated into discrete task groups, sometimes called behavioral castes. It is unknown whether inactivity serves a purpose or not, and finding adaptative explanations for inactivity is particularly relevant because high levels of doing nothing are likely not an artifact of simplified living conditions in the lab. Moreover, there is evidence that when workload increases, workers other than inactive workers increase their activity and no reallocation of inactive workers to necessary tasks takes place, even at the expense of losing half of the brood. 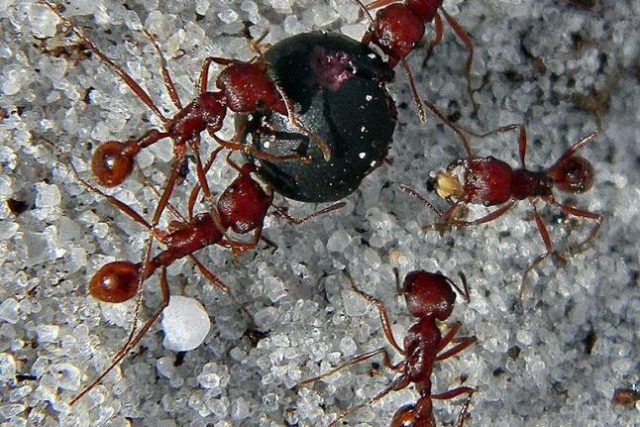 Charbonneau and Dornhaus also demonstrated that workers can be grouped into external workers (who forage and build the nest), nurses, patrollers/groomers, and inactive workers, defining a new group of animals that is frequently not taken into consideration in ecological studies. In addition, insects have circadian rhythms, but intra-nest tasks tended to be performed uniformly across the 24 hours. Differences in activity linked to circadian rhythms or ants laboring in shifts cannot explain why some worker ants were consistently idle. There are no explanations hitherto for this curious behavior, although apparently it does not significantly impact colony function 2. Different explanations, hitherto without answers, can be proposed for this phenomenon:

All these hypotheses are not exclusive, so a surplus of animals can provide many options and the same animals may fit in several of different options. For example, the research team has suggested that the inactive insects could be older workers, who have slower metabolism because of their age, and whose task is to store food.

Charbonneau and Dornhaus have found that the lazy ants are bigger, tend to keep to themselves and have less social contact with other ants than any of their nest mates. This could support the hypothesis that lazy ants are guards (pun not intended for guarding forces and services).