Japan is known to be one of the world technological leaders. Having to import many of the raw materials and fuels its industry needs, it has been basic research and the development of technologies based on it what have transformed Japan in a window into the future. An important part of that future is based on condensed matter physics and nanotechnology, and it is being developed in Japan, as the 2014 Nobel prize in physics to three Japanese researchers shows.

The International Center for Materials Nanoarchitectonics (MANA) was one of the nine research centres sponsored by Japan’s Ministry of Education, Culture, Sports, Science and Technology (MEXT) for the World Premier International Research Center Initiative(WPI). The aim of the WPI is to create top world-level research centres sufficiently attractive to outstanding researchers from around the world, and MANA was established under this premise to encourage proactive science and technology research with a team of excellent researchers. MANA has been called one of Japan’s best research institutes not only for its research output but also for its efforts to internationalize and establish effective programs for training young researchers.

MANA’s main goal is developing ground-breaking new materials on the basis of the nanoarchitectonics concept. In order to achieve this, creating a “melting pot” where top-level researchers gather from around the world and securing young scientists, fostering their confidence to battle toward challenging targets, are its two main priorities. In an interconnected world, a consequence is a need of constructing a worldwide network of nanotechnology centres to partner with. 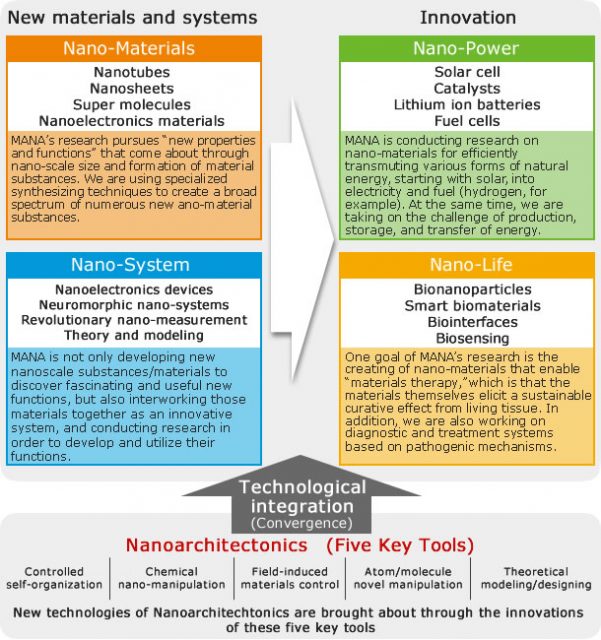 (1) Structures cannot necessarily be built as designed at the nano-scale because of thermal or statistical fluctuations, or the limitation of control methods. This means that the mindset of creating reliable functions from sometimes incomplete “components” and ambiguous “structures” is key.

(2) Materials at the nanoscale often exhibit new, peculiar and interesting properties, but any component with these properties or an aggregate of such components does not necessarily generate useful functions. An utterly new material function can be created only if components of both the same kind and differing kind effectively and organically interact with each other. In other words, the view of shifting from structural building to organizing interaction is another key.

(4) A new theoretical field covering the foregoing three viewpoints must be established. The theory, which should be called nano-theory, must not just study a range of first principles such as atoms, molecules, electrons, photons and spin but introduce new and bold yet appropriate approximations.

It was only natural that MANA and DIPC started collaborating, their goals and philosophy having so many points in common. In 2011, the first two important papers were published as a result. V.M. Silkin, V. Despoja, J.P. Echeverry, S.V. Eremeev, E.V. Chulkov and P.M. Echenique from DIPC teamed with T. Nagao from MANA to publish Low-energy plasmons in quantum-well and surface states of metallic thin films 1 in Physical Review B, and again T. Nagao and H. Gui from MANA partnered with P. Albella and J. Aizpurua to publish Longitudinal and transverse coupling in infrared gold nanoantenna arrays: long range versus short range interaction regimes2 in Optics Express.

But it was a question of time that the collaboration expanded beyond plasmonics and photonics into the physical chemistry realm. In 2012, I. Hamada from MANA and T. Frederiksen from DIPC, together with scientists from other institutions, published H-atom relay reactions in real space 3 in Nature Materials. And in 2014, D.G. de Oteyza, E. Goiri, and J.E. Ortega from DIPC teamed with Y.Wakayama from MANA and others to publish Asymmetric Response toward Molecular Fluorination in Binary Copper−Phthalocyanine/Pentacene Assemblies 4 in the Journal of Physical Chemistry C.

MANA and DIPC signed in 2014 a formal collaboration agreement between both institutions that will add visibility and importance to the ongoing cooperation by establishing a stable, long-term framework. MANA have similar agreements with other first class international institutions all around the world, but DIPC is the only one in Spain so far.

A new benchmark for any future models of solid-state photoemission