Terahertz (THz) radiation is all around us. For example, this page emits blackbody radiation mainly in the THz region (broadly from 0.3 THz to 30 THz). Because terahertz radiation begins at a wavelength of around one millimeter and proceeds into shorter wavelengths, it is sometimes known as the submillimeter band, and its radiation as submillimeter waves, especially in astronomy.

This band of electromagnetic radiation can be regarded either as microwave radio waves or far infrared. The technology for its generation and manipulation is in its infancy, that is why engineers talk about the THz gap (in this case, from 0.1 to 10 THz) . One of the reasons is that THz radiation from traditional microwave sources is usually too weak to have any measurable impact on the properties of materials.

The situation drastically changed at the beginning of the 2000s, when the technique of optical rectification with phase matching in crystals lacking inversion symmetry such as lithium niobate was developed. This technological breakthrough enabled the development of table-top sources of single-cycle THz pulses with field strengths comparable to the intrinsic field strength in a wide range of strongly correlated materials. Consequently, it became possible to engineer new dynamic states of materials by modifying their intrinsic fields.

In condensed matter physics and in general, THz radiation is an efficient tool to investigate a multitude of low-energy excitations existing in the THz region. Important examples are resonances of phonons and plasmons (collective lattice and electron vibrations, respectively), spins, intersubband transitions (subbands are electronic energy bands formed in quantum wells, in which the electrons are confined in two directions), excitons (bound electron–hole pairs), macro-molecular vibrations and molecular rotations.

THz radiation is able to penetrate most dielectric materials non-invasively, opening the way for numerous possible applications in the fields of medicine, security,chemical spectroscopy, as well as data transmission, notably in thef ramework of the future 6 G cellular network. This is why photodetection and emission in the THz regime have recently attracted a lot of attention from fundamental and applied research communities.

Terahertz detectors can be classified in two main categories based on their underlying detection mechanisms: thermal detectors, including bolometers,and detectors based on collective or single electron excitation mechanisms exploiting properties inherent to quantum confinement.

In this context, carbon-based materials such as graphene and single-walled carbon nanotubes (SWNTs) have shown to be promising candidates for the next generation of THz detectors and sources. A quantum dot (QD) is a nanometric crystalline structure of semiconductor materials. In a QD electrons are confined in a region of space, thus creating a well defined structure of energy levels that depends very much on the size and shape of the quantum dot. This structure resembles that of atoms, that is why sometimes quantum dots are also called artificial atoms. Energy transitions in the THz range can be induced in metallic SWNTs quantum dots (QD) engineered with contacts or artificial defects.

A recently reported mechanism combining resonant quantum dot transitions and tunneling barrier asymmetries results in a narrow linewidth photocurrent response with a large signal-to-noise ratio under weak THz radiation. That device was sensitive to one frequency, corresponding to transitions between equidistant quantized states. 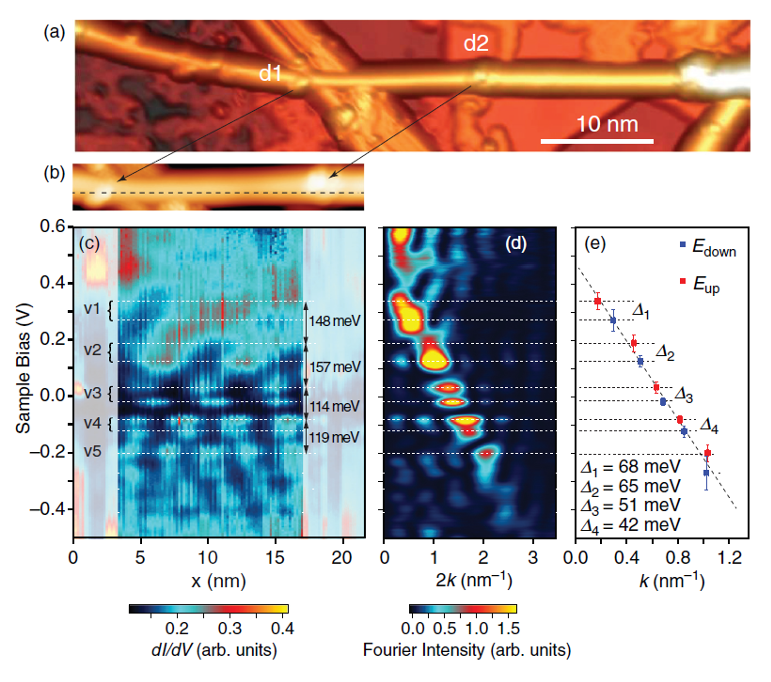 Based on these findings, the researchers propose a terahertz detector device based on a metallic single-walled carbon nanotube quantum dot defined by artificial defects. Depending on its length and contacts transparency, the operating regimes range from a high-resolution gate-tunable terahertz sensor to a broadband terahertz detector.

Calculations indicate that the device is largely unaffected by temperatures up to 100 K, making carbon nanotube quantum dots with broken symmetries a promising platform to design tunable terahertz detectors that could operate at liquid nitrogen temperatures.