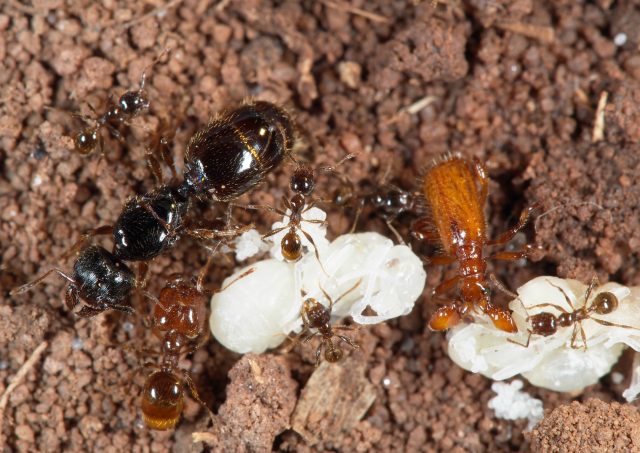 Ants communicate through different mechanisms in order to regulate their social organization. The best known is through scented chemicals known as pheromones. These chemical messengers are received at the tips of the antennae and differences in concentration between the left one and the right one are used as an orientation vector. Ants use about ten to twenty pheromone odorants and each represents a «chemical word» that the entire colony understands. The queen ant also produces special pheromones that let workers know her status and needs and they also help to distinguish between nest mates and strangers. However, it is not the only communication channel and it has been long known that acoustic signals also play an important role in the organization and regulation of ant communities.

Adult ants from different subfamilies (Ponerinae, Nothomyrmecinae, Pseudomyrmecinae and Myrmecinae) are able to produce low frequency sounds called stridulations by rubbing the «scraper» or plectrum located in the legs against a minutely ridged area, called the «file» or pars stridens placed between two abdominal segments. Ants use such acoustical signals for various purposes, including social organization, recruitment, mating, or help request.

The ant nest is an insect fortress but very attractive for marauders because of its rich deposits of food inside. However, intruders attempting to sack the colony are rapidly discovered, overtaken and killed. Thousands of species called myrmecophiles or «friends of the ants» have learned to hack the defense system of the colony and use their bountiful resources including the ants themselves as food, and the galleries of the nest as a safe and well-protected home. Almost all of these parasitic species use the chemical communication system but one species, the ant nest beetle (Paussus favieri) use the acoustic system to trick Pheidole pallidula, the ant species whose nests infiltrates. This has been studied1 by a group lead by Dr. Andrea di Giulio from the University of Roma and published in PLoS One.

Adult nest beetles (subfamily Paussinae) have elaborate antennal structures and flattened body parts. The strategy of Paussus is very complex, because it involves multiple types of interaction. Adult beetles need to enter the nest, move freely within it to find appropriate places for egg laying and larval development, feed on the ant broods without being attacked, reward the ants by supplying attractive substances from their glandular trichomes, and find their partners for mating inside the nest. Thus, they need to interact with different castes in different ways, due to the allocation of the behavioural repertoire of the different castes inside the society of the genus Pheidole. As far as scientists can tell, workers feed the young beetles as if they were ants. When the beetles grow into adults, the ants swarm around them, grooming their bodies. In exchange for this hospitality, the beetles feed on ant eggs, larvae and adults by piercing their mandibles into the abdomen or other soft part and sucking the contents. The ants do not react even those that are being harmed 2.

The beetles have several stridulatory structures including alary-elytral, abdomen-femur and thorax-femur combinations of surfaces. They survive and prosper because of these different sound-producing structures, they can perform perfect imitations of the ant calls. Pheidole pallidula ants make three distinct stridulations, each produced by a different caste: soldiers, workers and the queen. It seems that the ant beetles can imitate all three and it is possible that they use different calls to trick the different groups of ants in the different systems. The beetles may, for example mimic soldier calls to avoid their attack and the queen call, on the other hand, may elicit royal care. Paussus utilizes modular acoustical mimicry to achieve the highest hierarchical status of the colony.

The research team installed a miniature loudspeaker in a chamber and buried it in sand, then put ants in the chamber and played beetle calls through the speaker. The ants didn’t respond by attacking. The authors recorded the presence of the following behaviours: (1) walking (the worker was attracted to the speaker and walked over it); (2) antennating (the worker antennated the speaker for at least 3 s); (3) guarding (the worker showed an alert on-guard poise on the speaker for at least 3 s; (4) digging (the worker dug into the soil over the speaker); (5) staying (workers stayed on the speaker without performing any movement or assuming a particular poise). Instead, they crawled toward the sound to investigate, waving their antenna in a pattern they use only to detect fellow ants. Then they started digging to the speaker, like they were rescuing somebody. It was observed that with some of the beetle calls ants reac with guarding response, a behavior usally reserved for the queen. The researchers suggest that, by mimicking the stridulations of the queen, Paussus is able to dupe the workers of its host and to be treated as royalty.

It is very possible that the ant nest beetles used a more complex system including other forms of deception. They have large antennae covered with glands that may release chemicals that can interfere the pheromone communication system of the ants.

The Di Giulio group refers to these beetles as social parasites since instead of infecting a single host’s organism, they hijack an entire society. There was a previous example of a myrmecophile lycaenid butterfly, Maculinea, that also produce stridulations that mimic those of the queen thereby interfering with their host’s accoustical communication system but this is much more complex and it is the first report of acoustic mimicry in a beetle parasite of ants.