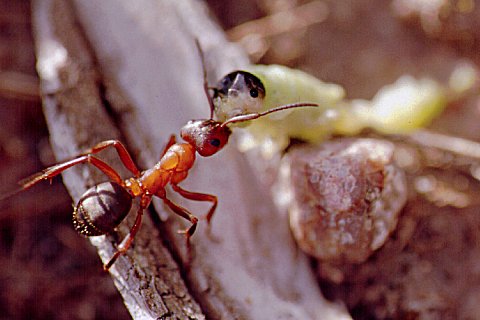 Animals drift when they enter a fluid (liquid or gas) and are transported to a new location by gravity or currents. Drift is best known from rivers and ocean currents, but can also occur on land, whenever organisms leave their former solid position, pass into the air, and are moved significant distances by the combined effects of gravity and wind. Probably one of the best-known examples of drift transport are the ballooning spiders, that use the wind to disperse themselves but there are other animals that use gravity and the wind when they jump or fall from trees. This is the case in some ants.

Northern wood ants, Formica aquilonia, crawl up trees to gather food, arthropods and honeydew mostly. Each day, at a typical colony, thousands of individual workers do this and most return to the ground the same way but a noticeable number, however, have a habit of dropping or «raining» off the branches of trees in their droves. The term ant rain has been previously used for fertilized queens of geni such as Formica and Lasius that go down to the ground after their nuptial flights. By contrast, the ant rain of Formica aquilonia is present throughout the year, with and without predators, without a particular situation, and seems to have a more important ecological impact.

The reason for jumping is to shorten the time required for a worker to return to the colony but it can also be a way to avoid danger. When a bird land near a group of Formica aquilonia ants in a tree, several responses can be observed among the insects: some workers attack the birds; others try to avoid them by changing speed, hiding on the underside of branches, or crawling away from perches frequented by birds; a third strategy is to jump off the branch where they were staying. The falling ants arrive fastly to the ground below and usually crawl away without any signal of injury.

Paul Haemig from Umeå University in Sweden studied this ant rain 1. He did it during the summer, selecting a pair of ant-foraged trees (Norwegian spruce, Picea abies, and Scots pine, Pinus sylvestris) and wired a set of pitfall traps above the ground. Each pitfall trap consisted of an aluminium baking tray holding a narrower plastic container without a lid. Each contained had a sticky band of glue to avoid wandering ants to be mixed with the «raining» ants and it was filled with a mixture of water and dishwashing detergent. The researcher attracted birds to the trees with the traps by wiring a suet ball (a commercial mixture of suet, peanut bits, and sunflower seeds) to the trunk and used similar trees without the suet as controls. Birds attracted to the bird tree during the experiments included the great tit, Parus major, willow tit, Parus montanus, great spotted woodpecker, Dendrocopus major, jay, Garrulus glandarius and chaffinch, Fringilla coelebs. All of these bird species are at least occasional predators of ants. Although they are not ant specialists, they eat ants frequently enough to constitute a threat to the fitness of the ant colonies.

When no birds were in sight, initial levels of ant rain ranged from 0 to 11,9% (X=4.0%) but when birds came foraging, the percentage of ants entering the downpour in those trees ranged from 2.9 to 28.4% (X=9.1%). In trees not visited by birds, ant rain decreased slightly during the same period to a mean of 3.7%.

Haemig identified, at least, six mechanisms by which birds could conceivably cause an increase in ant rain: (1) some ants may deliberately jump to avoid predation by birds; (2) the wingbeats of a bird might create wind currents that blow some ants off the tree; (3) ants may become more susceptible to losing their balance and falling off the tree accidentally because their attention is diverted to watching the bird; (4) a feeding bird may drop or dislodge bits of food or bark that might knock ants off the tree; (5) when a bird lands or moves on a tree, it might dislodge some ants by direct physical contact; and (6) a bird landing on a branch might indirectly dislodge some of the ants there by causing the branch (or the ball of suet in the experiment) to sway. The quantitative analysis allowed to discredit the possibilities nos. 4, 5, and 6 and the researcher mentioned that he has observed some ants running faster for a few centimeters and then jumping off the tree by springing outward.

Some ants are able to direct their fall, selecting where they want to finish it. Yanoviak and coworkers 2 have shown that the workers of another ant species, Cephalotes atratus use directed aerial descent to return to their home tree trunk with >80% success during a fall. Falling ants use visual cues to locate tree trunks before they hit the forest floor. They descend abdomen-first through steep glide trajectories at relatively high velocities.

In running water habitats, preys respond to predators by both submerging behavior and migration, this latter usually done by drifting. The continuous rain of free-falling ants, from trees to the ground, is analogous to the drift of invertebrates in freshwater streams and provides ecologists with an easily replicated terrestrial system for studying the phenomenon of drift. Free fall and directed fall are a form of locomotion in these insects.