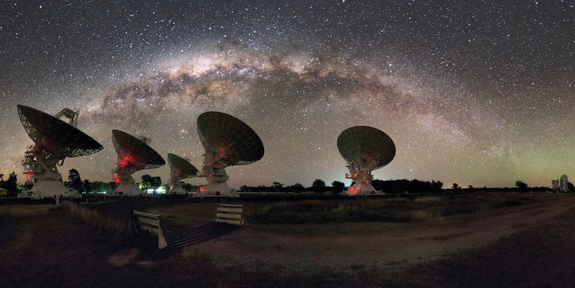 Noodle-, hazelnut-shaped plasma lenses may be hiding in Milky Way

Scientists are learning more about the shape of mysterious plasma lenses, which seem to invisibly float around the Milky Way, detected through radio waves. Researchers were able to detect a lengthy lensing event that gave them an idea of the shapes of the lenses.

Fibers reproduce some of the charge of an electric eel

Man-made fibers now mimic the electrocytes that give electric eels their 600-volt shock. Researchers created the fibers by wrapping sheets of carbon nanotubes around tiny elastic rubber fibers, leaving key gaps, and then applying patches of electrically conductive electrolyte gel to create capacitors. The fibers are seen as a way to power wearable tech devices.

A Venus flytrap captures and devours its prey by counting how many times the insect touches the sensitive trigger hairs positioned through the plant’s open trap, according to a study published in Current Biology. One touch alerts the plant that prey has wandered in, a second is the signal to spring the trap, and subsequent trigger touches get the plant’s digestive juices flowing. The number of additional trigger touches tells the plant information about its prey, such as size and what kind of nutrients it can expect from it, researchers say.

A recent study found that large doses of nisin — a naturally occurring preservative found in various cheeses and other dairy products — acts against 30 types of cancer. The compound also killed methicillin-resistant Staphylococcus aureus. The study, which involved mice, was small and the findings might not hold in people.