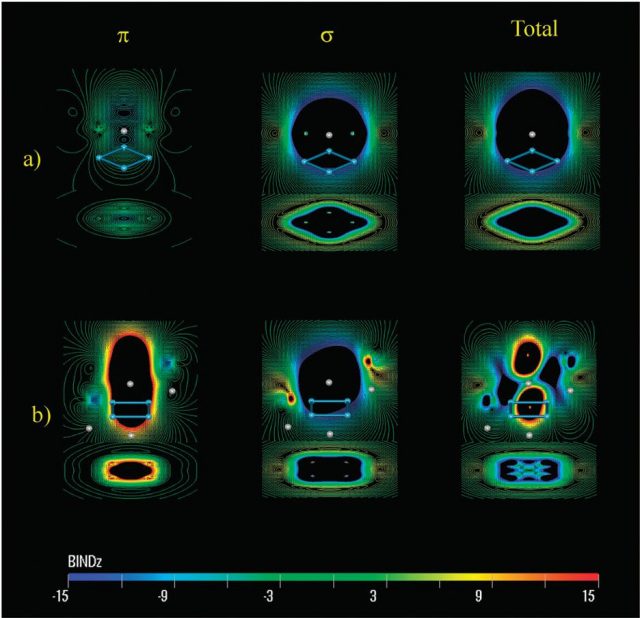 In the early days of organic chemistry, the word aromatic was used to describe fragrant substances such as benzene (from coal distillate), benzaldehyde (from cherries, peaches, and almonds), and toluene (from tolu balsam).

It was soon realized, however, that substances classed as aromatic differed from most other organic compounds in their chemical behaviour. Today, the association of aromaticity with fragrance has long been lost, and we now use the word aromatic to refer to the class of compounds that contain six-membered benzene-like rings with three double bonds. But aromaticity is present not only in different carbon structures, we can find it also in all-metal compounds. A group of researchers, including Jose M Mercero from UPV/EHU and Jesus M Ugalde from DIPC, has reviewed1 recent developments and future prospects of these compounds in Chemical Society Reviews.

Aromaticity in chemistry was introduced by German chemist Friedrich August Kekule, who used this term to characterize unexpectedly low reactivity in a set of molecules, derivatives of benzene. Molecules in his aromatic set actually had a specific odour. Since that, the aromaticity concept has been extended to a large number of organic species starting from the C3H3+ cyclopropenyl cation to polycyclic hydrocarbons, which are present in oil, coal and even in DNA molecules and all building blocks that support all known forms of life.

Today we think that aromaticity exists because of a specific chemical bonding pattern, which cannot be represented by a single Lewis structure, and consequently, we need to use either a resonance of a few Lewis structures or a multicentre bonding type description in order to get a chemical bonding structure consistent with the usually high symmetry geometry of aromatic molecules.

Aromaticity itself constitutes one of the many useful but loosely defined concepts that conform modern chemistry concepts’ toolbox. Some of them, aromaticity included, have no precise meaning and do not denote directly measurable quantities, albeit they are based mostly on experimentally ‘‘observable’’ measurements. Thus, aside from their ‘‘aroma’’, not necessarily always nice, it is firmly established that ‘‘aromatic’’ molecules are often more stable and their geometries more regular than expected a priori. Additionally, they are barely reactive, in spite of having a number of unsaturated bonds. These unsaturated bonds are not localized, but delocalized through the molecule and confined within the molecule.

Hückel in 1931 formulated his (4n + 2) rule for the ground singlet states of ring-like molecules having delocalized p-type molecular orbitals, n being the number of delocalized p-type molecular valence electrons. Hückel’s formula establishes the link between the molecular electronic structure and aromaticity. Breslow introduced in 1973 the concept of antiaromaticity. Unlike aromatic molecules, antiaromatic compounds are highly unstable and highly reactive and they obey a different Hückel (4n) rule.

Aromaticity and antiaromaticity have also been extended to the realm of non-carbon molecules. All-metal aromatic compounds have attracted increased interest since the earlier prediction of the aromaticity of transition metal metallocyclopentadienyls, made by Thorn and Hoffmann in 1979. Aside from metallocycles, which contain binary rings made of metals and carbon, organometallic coordination compounds containing all-metal aromatic rings have also been synthesized.

Since the introduction of aromaticity to metal systems, many new aromatic/antiaromatic chemical species composed of main groups and transition metal atoms were discovered. Along the way, aromaticity has also been extended to three dimensional systems and the term spherical aromaticity coined for polyhedral hollow molecular structures with 2(n + 1)2 delocalized electrons.

The reviewers focus on planar compounds like B13+ and the Al42- cluster to conclude that advances in a number of key theoretical methods carried out over the last two decades allow to reasonably rationalize the (anti)aromatic nature of the valence electronic structure. This opens a vast new playground for cooperation between the experiment and theory that will produce exciting new chemistry in the years ahead.

The large aromatic nanoring that wasn’t