A quantum dot (QD) is a nanometric crystalline structure of semiconductor materials. In a QD electrons are confined in a region of space, thus creating a well defined structure of energy levels that depends very much on the size and shape of the quantum dot. This structure resembles that of atoms, that is why sometimes quantum dots are also called artificial atoms.

QDs aggregate to form QD-solids, suitable for many technological applications. The final properties of these solids depend on how the constituent QDs interact. Real QD-solids exhibit significant structural variations and the control of the potential barriers between neighbouring QDs is essential to tune the interaction between the existing units and engineer the two-dimensional electron gases (2DEG) present at the surface, so-called surface state electrons.

Nanoporous networks grown on noble metals have been established in the last decade as reliable confining entities for the surface state electrons. Each pore acts as a QD and their properties are tunable by proper selection of the building units. These building units dictate the effective potential barriers – as in any QD-solid, the geometry of the array, and the existing interaction with the substrate defining the ultimate confining capabilities of the system.

Metal-organic nanoporous networks (MONNs) are possibly the most versatile and robust of the noncovalent organic arrays. Due to their stability, MONNs can be used as substrates for organic or inorganic adsorbates, and their metal coordination atoms show novel magnetic properties, catalytic effects, and variable valence oxidation states. MONNS can be arranged in different tessellation patterns (hexagonal, square, or quasicrystalline) just playing with the molecular end groups, the coordination atoms or the support surface, even resulting in theoretically predicted exotic topological properties. 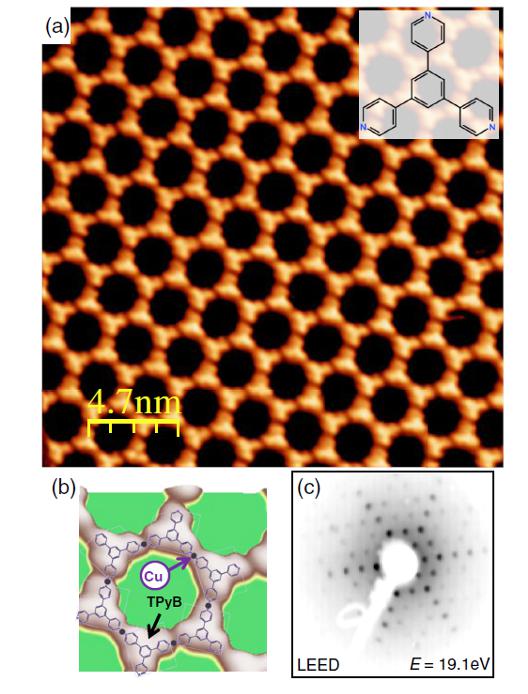 Still, some properties of MONNS are poorly understood. For example, while the scattering mechanisms of quantum corrals and step edges have been thoroughly studied, the scattering characteristics of molecules and metal atoms generating MONNs are not yet clear. Now, a team of researchers provides insight 1 into the potential landscape of a MONN by disentangling the scattering properties of the molecules and single coordination atoms. The researchers study the modification of the substrate’s surface electrons by the interaction of a two-dimensional organometallic framework of 1,3,5-tris(pyridyl)benzene and Cu atoms (TPyB-Cu) formed on Cu(111).

The atomically precise regularity of MONNs allows the investigation of electron confinement and periodic QD intercoupling that strongly depends on the building units’ potential landscape. These quantum effects manifest as energy shifts and gap openings at high symmetry points in the electronic bands when studied by angle-resolved photoemission spectroscopy (ARPES).

The evidence so far suggests smaller potential barriers of the coordinating single metal atoms than the molecules. This confinement strength exerted upon the 2DEG is found to vary from one network to another, necessarily affecting the electronic intercoupling between neighboring QDs.

The scientists manage to grow a single-domain and long-range ordered TPyB-Cu MONN network film that saturates the Cu(111) surface. Using mesoscale (ARPES) and nanoscale (highly resolved scanning tunneling microscopy and spectroscopy) experimental techniques, supported by theoretical calculations (density functional theory), the researchers find that the coordination metal atoms exhibit the weakest potential barriers for the surface electrons, which practically spoil the confining properties of their molecular counterparts. Since these Cu adatoms are located at strategic positions of the network, they act like efficient transmission channels between adjacent pores that yields significant interdot coupling.

These leakage pathways severely weaken the pore confining capabilities, facilitating and enhancing the coupling among quantum dots, something that can be exploited to engineer the electronic structure of surface electron gases.