When talking about molecules, “open shell” signifies that there are unpaired electrons. In terms of molecular orbital theory, it means that some molecular orbitals are singly occupied. Organic open-shell compounds are extraordinarily attractive materials for their use in molecular spintronics.

In spintronics, new memory and logic devices are being developed based on the use of spins of nuclei, atoms, or molecules, instead of electronic charges. The main advantages are an improved energy efficiency and speed of operation to store and process information.

Magnetism is typically associated with d– or f-block elements, but can also appear in organic molecules with unpaired π-electrons. This has considerably boosted the interest in such organic materials with large potential for spintronics and quantum applications. While several materials showing either d/f or π-electron magnetism have been synthesized, the combination of both features within the same structure has only scarcely been reported.

There are two main prerequisites for magnetic materials with contributions from both π- and d-electrons. First, the target organic structure must present a π-conjugated magnetic/open-shell electronic structure, and second, the π-system must have a sufficiently large overlap with some d-orbitals, allowing for π-d magnetic interactions. Meeting these two requirements within one molecule is certainly not straightforward, especially since the preparation of organic open-shell compounds is typically limited by their inherently poor stability and solubility. In this context, porphyrins are highly appealing molecular platforms.

Porphyrins are organic pigments characterized by the possession of a cyclic group of four linked nitrogen-containing rings called porphyrin, the nitrogen atoms of which are often coordinated to metal ions. Thus, they are tetrapyrrolic macrocycles with a planar structure and an aromatic circuit of 18 π-electrons. Porphyrins differ in the nature of their side-chain groups.

Porphyrins are heterocycles that show high thermal stability, rich coordination chemistry, tunable redox features, and excellent photophysical properties. But, importantly, porphyrins offer the possibility to chelate transition metals within their inner cavity, which potentially allows for strong π-d electron interactions. A natural example is haem, which contains iron and forms the prosthetic group of haemoglobin, myoglobin and the cytochromes.

But to get the desired porphyrin is no easy task. On one hand, the synthetic access to open-shell structures often faces multi-step synthesis, low yields, and poorly soluble intermediates and products. On the other, the low stability of these species typically hampers their characterization, which needs to be carried out in degassed solutions or through the in situ generation of the radical species. As a consequence, very few examples of inherently open-shell porphyrins have been reported.

On-surface synthesis is as a promising alternative to prepare open-shell polyaromatic hydrocarbons systems, offering significant advantages over the more classical “wet” synthesis. Ultrahigh vacuum conditions and the atomically clean, catalytic surfaces, provide the ideal playground for both synthesis and characterization of structures that are hardly accessible through solution-based methods. 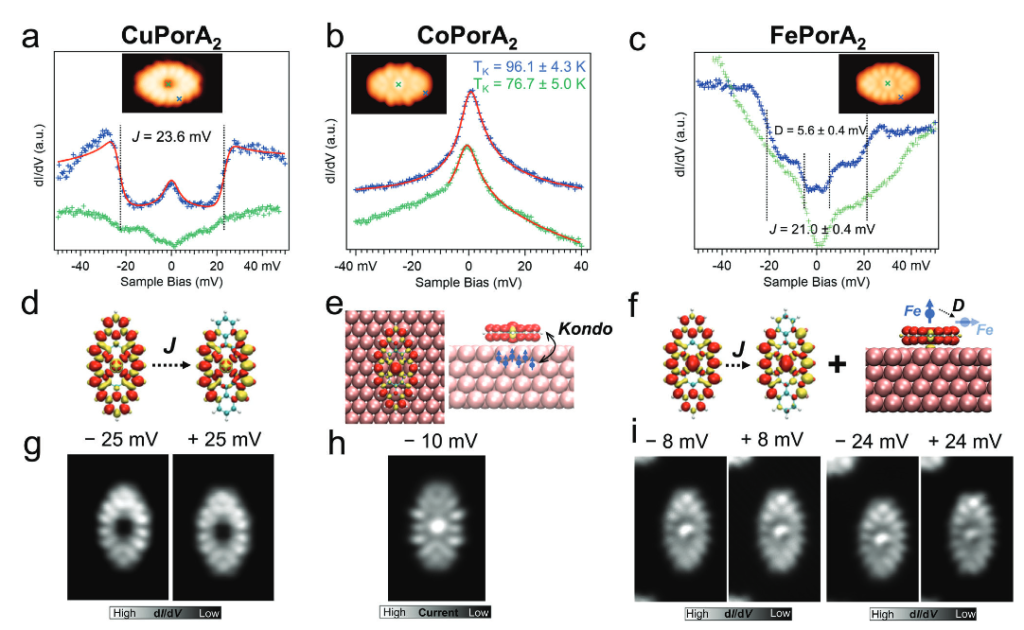 Recently, a team of researchers used on-surface synthesis to produce three Zn(II) porphyrins, with zero, two, and four phenalenyl moieties, with a demonstrated an open-shell character. Now, the same team reports 1 the preparation of a series of open-shell, π-extended porphyrins that contain magnetically active metal ions – namely, Cu (II) , Co (II) , and (FeII) – through a combination of in-solution and on-surface synthesis.

After the structural confirmation of the three surface-supported nanostructures, the magnetic properties of these metallo-porphyrins were carefully addressed by high-resolution scanning probe microscopy, complemented by DFT calculations at the single-molecule level.

This work provides a facile method for the fabrication of open-shell organic systems that contain chelated magnetically active transition metal ions, opening a path toward the realization of fascinating novel materials with intriguing magnetic properties.