The blood-brain barrier is one of the defenses of the central nervous system. It is made of a thin layer of endothelial cells closely fitted together by tight junctions, being a mandatory pass between the blood and the neural cells. Thus, this barrier, considered the last great biochemical barricade in the organism, separates the blood filtrate in the rest of our body from the blood filtrate in our brain. This has some advantages: while the rest of our organism has frequent and substantial variations in the concentration of different chemicals such as hormones or ions such as potassium, the delicate neurons, that could be badly affected by these drastic chemical variations, enjoy a more stable environment. In addition, the barrier is impenetrable for microorganisms causing that pathogens that might be in our blood usually do not arrive at the brain. It also prevents the entry of lipophilic, potential neurotoxins by way of an active transport. On the other hand, cells of the barrier actively transport metabolic products such as glucose using specific carriers whereas small or hydrophobic molecules such as oxygen, water, carbon dioxide and several hormones diffuse freely across it allowing a normal brain function.

This highly selective permeability barrier is essential for our survival but it has also a drawback: it complicates things when you are trying to treat cerebral diseases. About 95 percent of drugs administered through typical means (pills, injections, enemas or patches) are not able to cross the blood-brain barrier and, therefore, do not have any effect on the brain. One possibility would be to disrupt the barrier, but alter or damage it to allow the medications to enter the nervous system is a considerable risk since it would leave the brain vulnerable to infection or chemical imbalance. 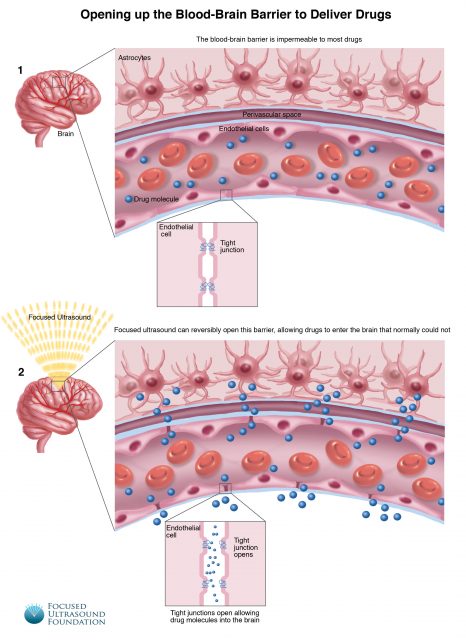 Previous research has provided some useful hints: small molecules such as ethanol or nicotine are able to penetrate the barrier and generate fast changes in neuron activity and, therefore, the answer may be to synthesize effective drugs that are as small as those. However, there are many pharmaceutical compounds that have complex structures and it does not seem possible to alter substantially this structure and keep their mode of action. Another useful information is that several treatments such as enzymes, ultrasounds and nanoparticles are able to induce a temporary increase in the barrier permeability. Currently, there are limited options to circumvent the blood-brain barrier and deliver drugs. Drugs can be directly injected into the brain, with the risk of hemorrhage, infection or damage to normal brain tissue from the needle or catheter. The pharmacological agent mannitol has been employed to disrupt the barrier when injected into the bloodstream but this is approach is scarcely controlled and non-selective and can further be associated with significant secondary effects on blood pressure and fluid balance.

A new procedure has been tried in a 56-year-old woman called Bonny Hall by a team led by neurosurgeon Todd Mainprize and physicist Kullervo Hynynen. This patient has a brain tumor that it has been kept under control for eight years with medication, but her chemotherapy was already failing and the tumor was growing. It is a glioma and these tumors are often difficult to treat because they spread out and cannot be completely removed with surgery. In fact, between 1940 and 2005, there has been very little progress in improving the outcome of these patients. Neuroscientists at Sunnybrook Health Sciences Centre have found a non-invasive solution.

The Canadian researchers administered doxorubicin, a chemotherapy drug, intravenously. Then gas microbubbles were injected into the bloodstream. Using high-intensity focused ultrasound, the scientists were able to compress and expand the bubbles at a rate of about 200,000 times a second once they have entered into blood vessels in the tumor. The volume vibrations from the bubbles were just enough to loose the junctures between the epithelial cells lining the capillaries, enabling the medicament to penetrate through the barrier and be delivered into the brain tissue.

Preliminary analysis indicates that the technique allowed a reversible increase in the permeability of the blood-brain barrier and the drug reached the tumor. The technique seems to be safe and it does not cause any apparent damage. On the other hand, it is not known how much drug crossed the barrier and reached the target. Hall underwent surgery later in the day to have the bulk of her tumor removed. She will also likely receive radiation and chemotherapy as part of her follow-up care. The study of the tumor will permit to compare the amount of doxorubicin that got into the tumor in the region where the research team opened the blood-brain barrier and where they did not, to see if there is a significant increase in the delivery of the chemotherapy as can be expected.

This patient treatment is part of a pilot study of up to 10 patients to establish the feasibility, safety and preliminary efficacy of focused ultrasound to temporarily open the blood-brain barrier to deliver chemotherapy to brain tumors. Opening the barrier is probably the major limitation for innovative drug development for neurosciences. The capacity to cross the blood-brain barrier would allow us to use more drugs in the treatment of different conditions such as epilepsy, depression, neurodegenerative disorders and beyond. It will revolutionize the way we treat brain disease and it will give hope to patients who nowadays have no hope.