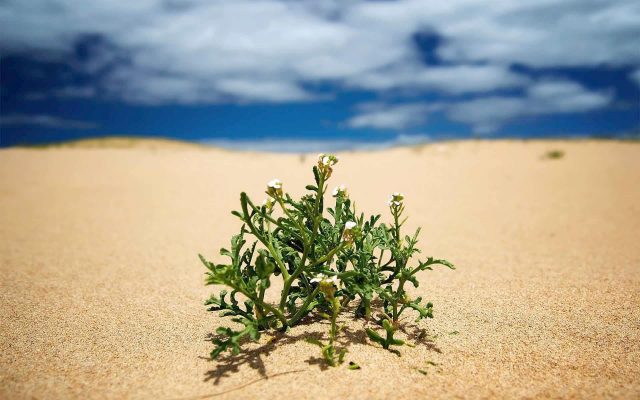 The Sahara is the world’s largest hot desert covering about one quarter of the African continent. The sun is constantly up and makes some spots in the Sahara the hottest and driest on Earth, with average highest temperatures above 38 degrees Celsius and very low, if any, annual rainfall. As fresh water dwindles, most of the Sahara’s fauna is forced to migrate to seek alternative resources, or enter a dormant state in the shelter of a burrow where they survive during the arid desert summers. But what happens when you can’t avoid it? Plants, due to their sedentary nature, are the most vulnerable organisms to extreme weather conditions, and in order to survive, they have had to come up with alternative ways to cope with extreme heat and prolonged periods of drought. Despite all, nature always finds its way through.

Far more alive than they seem

Adaptation to desiccation was one of the most formidable achievements in the evolution of life on Earth. Simple primitive plant organisms evolved a series of mechanisms that allowed them to withstand dehydration and colonize terrestrial environments millions of years ago. These adaptations are still present in lower-order plants such as algae, lichens, and bryophytes, but only remain in some 300 or so angiosperm –flowering plants- species. These so-called resurrection plants confront extreme desiccation by drifting into a dormant state in which they can stand losing over 95% of their water content, and return to full activity upon rehydration.

Most plants can withstand water deprivation to some extent by closing their stomata, but if water loss exceeds 40% of their relative content, cellular damage is irreparable and the plant eventually succumbs to death. By contrast resurrection plants have proven resourceful in developing strategies to minimize cell damage and survive prolonged dehydration. Selaginella lepidophylla, also known as the rose of Jericho, is one of these few extraordinary plant species that have adapted to the arid climate of the desert. It can survive for years –and even decades!- in its dry state by curling the branches that protect the seeds from a hostile environment, and sleeping through the adversity. When the rain starts falling, the plant wakes up and uncurls its dried branches in a matter of minutes, releasing the seeds from which new shoots will flourish in a few weeks. And again, when the sun once again dries out the land, the new roses of Jericho will return to their dormant state until the next rainfall.

The astounding properties of these extremophiles have attracted the attention of plant physiologists who are beginning to understand the mechanisms through which they are able to cope with extreme desiccation. At the molecular level, one of the most detrimental consequences of desiccation is the overproduction of reactive oxygen species (ROS) in the chloroplasts as a result of deficient photosynthesis. Thus, light is the primary stress source during desiccation. Accumulated ROS oxidize proteins and lipids, damage DNA and RNA, and ultimately lead to programmed cell death. To prevent this, resurrection plants rapidly respond to water deficiency by switching into a “stress mode” that leads to a complete inhibition of photosynthesis. Some species, like the esparto grass –Stipa tenacissima–, prevent ROS production in water-deprived conditions by degrading their chlorophylls and disassembling their photosynthetic apparatus1. Other plants such as the rose of Jericho, avoid free radical formation by undergoing morphological changes that hide their photosynthetic green tissues from the sunlight, thus minimizing photo-destruction. Evolutionarily speaking, both strategies have been selected as ways to minimize light-induced damage during dehydration, yet there are differences between them. Plants retaining chlorophyll pigments are able to resume metabolic activity much faster. However, they are permanently subjected to light-induced damage. By contrast, dismantling the photosynthetic machinery ensures avoiding photo-destruction but imposes a delay in restarting photosynthesis 2.

In parallel to deactivating photosynthesis, these resilient plants put in place an arsenal of stress-response mechanisms to minimize tissue damage and ensure survival during drought. These include the generation of antioxidant enzymes and metabolites to improve ROS-scavenging; accumulation of sunscreen pigments and polyphenols acting as osmoprotectants; and switching their metabolic circuitry to build up sucrose and polysaccharides, that help to retain cellular architecture while awaiting the moment of resurrection3.

But what has made these plants so well prepared to withstand extreme abiotic stresses? Scientists have found the answer to this by looking at the seeds. The genetic programs of desiccation tolerance are constitutively active in seeds to ensure the dissemination of plant species in spite of unwelcoming conditions. Large-scale transcriptomic studies have revealed that these genes are permanently repressed in the vegetative tissues of the majority of plants, and even in the seeds of species growing in environments where these are conducted to immediate germination, such as happens with crop plants. However, during the evolution of angiosperms, a reduced, yet diverse, group of species exposed to environmental cues maintained those genetic programs active in stems and leaves and achieved the capacity to resist the inclemency of arid climates 4.

Research has shown that resurrection plants are constantly on the alert for desiccation. Their transcriptomes and proteomes are characterized by a higher basal production of antioxidants, heat-shock proteins, and other protectants. Additionally, these are heavily over-activated upon sensing water deprivation as compared with desiccation-sensitive species, thereby ensuring a rapid response to water loss. However, these capacities are not without trade-off. The energy resources directed to maintain this permanent molecular state of alert is associated with a slower growth, and resurrection plants rarely reach large sizes.

Improving crop productivity in the face of climate change

Given the innate potential of these plants to resist the ravages of weather and the fast pace at which global climate is changing, researchers are aiming to enhance these features in crop plants to improve productivity5. With good reason, as in recent years extreme drought –one of the most evident consequences of climate change- has been especially detrimental in arid sub-Saharan regions, accounting for over 90% of crop production losses. Moreover, a report released by the Food and Agriculture Organization of the United Nations (FAO) estimated that the population increase projected for 2,050 will require a substantial increment on food production in order to cope with the demand in food supply 6. Aside from current efforts to reduce the food distribution gap, promote sustainable and more productive farming approaches, and decrease the environmental impact of food production, the daunting future that humanity is facing will require that we come up with resourceful solutions to meet an increasing demand for food.

In this regard, a potential for improving important crop plants has been shown by stimulating the expression of stress-tolerance genes in model species. The introduction of genes participating in various aspects of desiccation tolerance such as osmotic stress, ion transport, or sucrose synthesis, in transgenic crop systems, has resulted in enhanced growth under water deficit conditions without detrimental effects on the crop´s nutritional properties or substantial phenotypic changes. In line with this, the recently discovered CRISPR/Cas9 technology might also prove useful to induce the activation of intrinsic dormant genes -or their combinations- that allow for increased stress tolerance in a more physiological fashion.

Many advances are still necessary to identify which genes and regulatory elements in the DNA are required to improve desiccation tolerance. Scientists in this field face a large diversity in the mechanisms used by plants to combat water deprivation, as different ecological constraints determine the selection of a variety of adaptive strategies. Moreover, the genome sequences of many of these organisms have still not been decoded. Thus, there is still a long way to go before we fully comprehend these highly sophisticated processes and can consider manipulating them for the benefit of humankind.

However, it is the case of “when” rather than “if”, that genetically modified (GM) crops will become widely implemented. Hence, central to the future development of GM crop systems is to ensure a scientific, bioethical, and politic framework under which this can be done in a controlled manner, and with the first and foremost goal of ensuring food supply to the humanity, while being respectful with the only one Earth that we inhabit.

Exosomes in cancer: corrupted messages that transmit the metastatic impulse