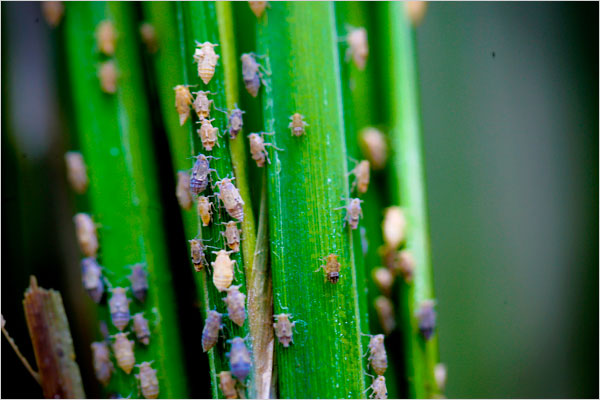 Plants are sessile organisms, which means they can´t move around. Of course, they have some types of movements like turning towards the sun but the place where the seed germinates the plant will stay during their entire life cycle. Obviously, this fact has important consequences on how plants respond upon variations of their surrounding environment since for example when it is cold they need to resist without the possibility of grabbing a coat. Similarly, when they are attacked by insects they can´t crush them with their hands or spray them with an insecticide. Thus, plants have evolved an important molecular machinery to face insect attacks. This is crucial because plants are the food source of more than one million of insect species and two-thirds are insects that cause damage in the leaves with the consequent loss for crops yield 1.

Similarly to other plant pathogens such as bacteria, viruses or fungi there is a strong co-evolutionary race between plants and insects where both are constantly evolving to be able for the insect to attack the plant and the plant to continue being resistant. This evolutionary competition has commonly been illustrated with The Red Queen´s race, a scene of “Through the Looking Glass”, a sequel of Alice in Wonderland written by Lewis Carrol, where Alice is running behind the Red Queen. They both run faster and faster just to be able to stay in the same place (Figure 1).

The arms plants deploy to defend against insects are composed of different strategies, some constitutive such as physical barriers like leaf toughness or trichomes and some inducible. Among the inducible defense strategies, plants are able to synthesize volatile molecules to attract predators of the insects or to discourage the insects of oviposition or leaf-eating. Another strategy is to accumulate secondary metabolites with toxic or antifeedant effects on insect herbivores. However, to launch these mechanisms is crucial to detect the presence of the insects and this detection to be effective needs to be as quick as possible (Howe and Jander, 2008). In march it was published in Nature Biotechnology journal an article of a Chinese research group describing an important molecular mechanism of rice plants to detect the presence of insects and essential for the resistance against the brown planthopper (BPH), an insect which sucks the sap from rice phloem using its stylet and causes the loss of billions of dollars annually2. To counteract BPH action pesticides have been efficiently used for decades but they have also heavily contaminated the environment, so every attempt to try to reduce pesticides use is strongly welcome. Breeding programs identified more than twenty loci in the rice genome associated to BPH resistance but only two resistance genes were cloned (Bph14 and Bph26).

Many efforts were done to decipher the molecular identity Bph3 locus, because it was able to confer resistance not only against many BPH biotypes but also against the white black planthopper (Liu et al, 2105). In this way, Bph3-containing rice varieties are resistant to BPH whilst the varieties lacking this locus are susceptible (Figure 2).

Interestingly, Li et al., identified the genes that confer the resistance of Bph3 locus. These genes are three putative lectin receptor kinases (OsLecRK1, OsLecRK2, and OsLecRK3); a fourth gene OsLecRK4 is also in tandem with the last three but is not necessary to induce BPH resistance (Li et al., 2015). These type or receptors are located in the membrane of plant cells. They posed an extracellular domain for perceiving environmental signals and an intracellular domain to transduce the signals inside the cell to launch the corresponding defense mechanisms (Figure 3). Overall, plants use cell-surface receptors to detect conserved and essential attributes of microbes and pathogens, known as pathogen-associated molecular patterns (PAMPs), such as the perception of bacterial flagellum by the receptor FLS2 or the perception of fungal chitin by the receptor CERK1. Thus, OsLecRK could potentially participate in the perception of herbivore-associated molecular patterns (HAMPs) or plant-derived damage-associated molecular patterns (DAMPs) to mediate the downstream signaling events leading to resistance (Figure 3).

To check whether this gene cluster was able to confer resistance to BPH to susceptible varieties, the authors genetically engineered the susceptible japonica rice Kitaake variety, lacking this gene cluster, by inserting into its genome these genes individually or in combination (Li et al., 2015). It appeared that the expression of all three OsLecRK genes had a larger effect on BPH resistance than expressing each gene alone (Figure 4a). Moreover, at least two of the genes were required for resistance. Furthermore, to confirm the importance of this gene cluster, the authors knocked down the genes by RNA interference (RNAi) in a rice line containing Bph3 locus and it turned that gene silencing reduced BPH resistance in correlation with OsLecRK genes expression (Figure 4b-c). Overall, the discovery of Li et al., represents a great advance in the knowledge of plant resistance against insect pests and might have an important agronomical impact. Further research will surely advance in the biochemical function of OsLecRKs receptors, discovering the potential HAMPs and DAMPs that could activate them as well as the downstream signaling events that could be essential for the identification of new important genes governing plant-insects interactions.

On the origin of carnivorous plants: the oldest fossil found in Baltic amber