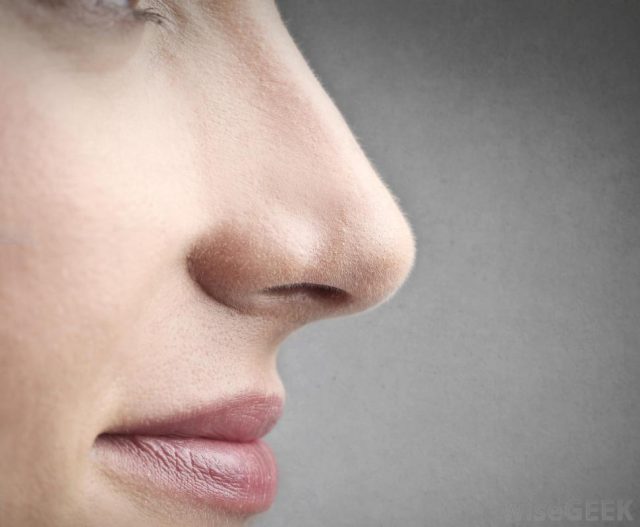 The nose is one of the strangest structures of human anatomy. It is much more different from our closest relatives than other parts of the body, it is sexually dimorphic, being on average larger in males than in females, and it is different among different hominin species and among different ethnic groups. Size and shape of the nose have physiological and evolutionary implications. The high and narrow noses of Inuit and Neanderthals, as examples, are considered an adaptation to a cold and dry environment since they contribute to warm and humidify the incoming air and to recover heat and moisture from exhaled breath.

The main function of the nose is to bear the nostrils and its shape is determined by different bones and cartilages, including the septal cartilage, which separates the nostrils, and the upper and lower lateral cartilages. Physical anthropologists have long used nose variability to examine human population diversification, including the possibility that facial features have been influenced by adaptation to the environment and that they can facilitate individual recognition, a crucial part of interpersonal relationships. Curiously, it has been hypothesized that the notorious human nose is the result of bipedalism. This changed the shape of the skull base causing a reduction in the relative size of the maxillary and mandible and thus, a protrusion of the most anterior parts of the face, i.e. nose and chin1.

The individual variability of noses is very high. Some people have narrow, pointy noses, while others have broad bridges or wide nostrils. It is also used as a stereotype: the Chinese frequently designate Westerners as «big noses» whereas, among the Europeans, anti-Semitic propaganda frequently portrays Jewish people as having large and hooked noses. These variations in shapes are genetically controlled and heritabilities of ~60–90% have been estimated for facial phenotypes. A group of genes that underpin the shape of the human nose have been identified in a study into facial features published in the journal Nature Communications 2. The leader of the study was Andrés Ruiz-Linares, professor of human genetics at University College London. 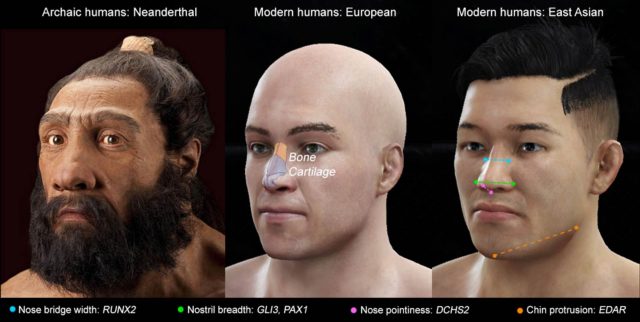 The authors collected DNA samples and nose photographs from 6,275 participants aged between 18 and 45 years from 5 countries in Latin America (Colombia, N=1,402; Brasil, N=658; Chile, N=1,760; Mexico, N=1,200; and Peru, N=1,255), part of the CANDELA consortium sample. The advantage of this geographical region is that actual Latin Americans are a mixture of Native American, European and African ancestries and thus it is an ideal location to explore facial diversity. On the photographs, the research team assessed 14 facial features on an ordered categorical scale reflecting the distinctiveness of each trait. They included features of the lower face: chin shape, chin protrusion, and upper/lower lip thickness; the middle face: cheekbone protrusion, breadth of nasal root, bridge and wing, columella inclination, nose protrusion, nose profile and nose tip shape; and the upper face: brow-ridge protrusion and forehead profile. After quality-control filters, final analyses were carried out on 671,038 genotyped single-nucleotide polymorphisms (SNPs) and 9,117,642 imputed SNPs in 5,958 individuals. Next, seven facial features of around half the participants were more precisely measured from 3D computer models. In each analysis, genetic information from the volunteers was scrutinized for correlations with the traits being assessed.

The main result was that there are four genomic regions linked to the shape of the nose since they are involved in three nose-related traits: columella inclination (4q31), nose bridge breadth (6p21) and nose wing breadth (7p13 and 20p11). Strongest association in 2q12, 4q31, 6p21 and 7p13 was observed for SNPs in the EDAR, DCHS2, RUNX2 and GLI3 genes, respectively. Appropriately, the most compelling candidate genes in the identified regions have well-established effects in cartilage and bone differentiation and have been shown to impact on craniofacial development in animal models. GLI3 and PAX1 were linked to nostril breadth, while RUNX2 affected the width of the nose bridge. The gene DCHS2 was found to influence how far the nose sticks out, whether it is upturned and the angle of the tip, i.e., the pointiness of the nose. Three of these genes (DCHS2, GLI3, and RUNX2) are known to show differences in modern humans compared to our extinct relatives, the Neanderthals, and Denisovans. This suggests that these genes could be involved in differences in nose appearance between us and our archaic cousins. There is another gene (EDAR) that determines how much the chin juts out. Intriguingly, this gene has previously been found to influence a range of physical features including earlobe size, beard thickness and whether an individual has straight hair.

Further studies, including additional quantitative trait analyses and the exploitation of 3D imaging techniques, should help delineate more fully the genetic architecture of the human face, including the possible overlap with gene regions implicated in alterations of facial development, such as non-syndromic cleft lip and palate. Another possible advantage of this study is that it will help forensic experts produce more accurate facial reconstructions of suspected criminals or victims3. However, it is important to note that the genetic variations correlated to the separate traits were each found to be responsible for only around 1% of the variation seen in the population sample, suggesting that many more genes are involved. It will be necessary much larger sized studies before one can think of using them to predict facial features from DNA.

Lung cancer can be detected through your nose

When should a man be more interested in caring for his sister’s children than his wife’s?