A 1 million-year-old fire lit by human ancestors was discovered in 2012 in the Wonderwerk Cave in South Africa. The soil of the cave yielded several dozen stone tools, microscopic plant ashes and burned bone bits. It is supposed that a member of the Homo genus, perhaps Homo erectus, made a fire that produced those remains. A tended fire in a cave serves several purposes: provides warmth, roasts food and deters approach by predators. It is a plausible conjecture that noteworthy increases in cerebral volume in Homo erectus and H. heidelbergensis, and, eventually, H. neanderthalensis and H. sapiens, were enabled by the enhanced digestion and absorption of nutrients that cooking afforded to pregnant women, lactating mothers, infants, and children.

In Europe, recent evidence has demonstrated that prehumans living around 800,000 years ago in what’s now southeastern Spain (Murcia) were fire pioneers. An article published in the journal Antiquity indicate that these groups lit small, controlled blazes in a cave located at the site of Cueva Negra del Estrecho del Río Quípar 1. This was unexpected because of the absence of hearths enabling heat-control until 300,000-400,000 years later. However, cerebral flexibility perhaps enabled adaptable utilization of bush-fires outside such that fire could be managed inside, albeit without heat control.

Control of fire is important evidence since it is considered a hallmark of developing human cognition and a vital technology for the colonization of cooler latitudes. Thermally affected and calcined fragments of bone, chert artefacts, nodules, fragments and spalls were recovered from a deep, 0.8-million-year-old sedimentary deposit. Chert is absent in the Upper Miocene (Tortonian) biocalcarenite cave walls; most chert came from an older Tortonian conglomerate outcrop 0.8 km east of the site, although comparative trace-element analyses suggest some excavated chert originated around 30 km away. No fire pit or hearthstones were found, therefore, there is no evidence of ability to control the heat of a tended fire.

Dating used magnetostratigraphy, thermoluminescence of heated flint, biostratigraphy of micro- and macro-mammalian remains, and single-grain optically stimulated luminescence analysis. Regrettably, 26Al/10Be analysis implausibly indicated Plio-Pleistocene antiquity but the remaining data were coherent with the 800,000 years estimation for the fire evidence. A helpful evidence is that the sediment just above where the burned material was unearthed corresponds to a reversal of Earth’s magnetic field, known to have occurred around 780,000 years ago. 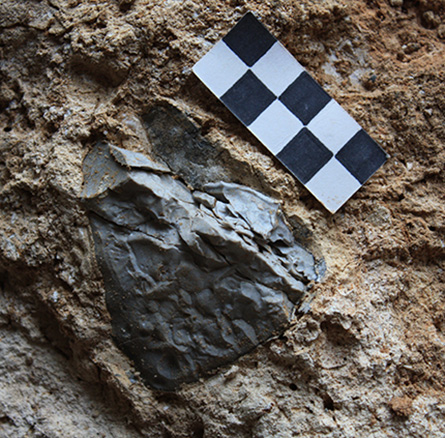 In previous excavations in the same cave, thermally altered lithics were unknown among >3000 pieces excavated, and barely a score of burnt bone fragments was scattered among >40 000 faunal items recovered. In summary, excavations conducted since 2011 at the Spanish cave have uncovered more than 165 stones and stone artifacts that had been heated (chert items, around 0.5–5 mm in size, shattered by combustion and 10 of limestone, 5 of quartzite and a radiolarite edge-retouched ‘scraper’), as well as about 2,300 animal bone fragments displaying signs of heating and charring including several white calcined ones. All evidence suggested a combustion area, apparently continuing inwards and outwards below 4.5 m of overburden, perhaps a bonfire site, although neither a circumscribed ‘feature’ nor ‘hearth’.

Observations made at the excavation site were supplemented with analytical procedures and specific studies including thermoluminescence analysis of an excavated burnt chert fragment, Fourier transform infrared spectroscopy of an excavated bone fragment and ESR spectra of three excavated bone fragments. These analyses indicated ancient heating >400 °C and incomplete calcination at <700–800 ºC. Thus, it indicated that materials had been heated to 400–600°C, compatible with burning.

Statements of early Paleolithic fire must be considered cautiously. Supposed proofs of fire from ancient cave sites can seem convincing but there are troubles of interpretation at well-known sites. Previous reports on this Murcian site were limited to a cautious cursory mention of small bones with “signs of burning” excavated in higher sediments, and to “loose sediment flecked with carbon”. It passes into unit VI, which is half-a-meter thick, and is distinguished by zones of very dark, loose soil, suggestive of burning.

Caution owed to a possibility that ash could have been blown inside from bushfires sweeping past the cave mouth; something that is the interpretation given for burnt traces in 1.2 Ma sediments at Sima del Elefante (Sierra de Atapuerca, Burgos, northern Spain). The research team doubts that sparks from a brush fire near the cave’s entrance could have triggered fires five to seven meters inside the cave. Dry brush probably didn’t grow near the cave anyway and geologic evidence suggests that around 800,000 years ago, the cave bordered a river and a swamp 2. The abundance of micro-carbons associated with exogenous organic mineral compounds is coherent with recurrent natural fires probably caused by exceptional atmospheric phenomena but heated flints in a cave site are unlikely to be the result of natural wildfires and may be considered a reliable indicator of anthropogenic fire if there is no evidence of reworking of sediments, slope wash, or debris flow entering the site.

Anthropogenic fire’ refers to the conscious generation of fire. It requires selecting and preparing different kinds of materials and a reduction of instinctive fear of fire. It is fascinating that in Africa, Israel, and Spain, convincing signs of combustion occur at several places where Paleolithic gatherings include bifacially flaked stone artifacts. An appealing inference is that the coincidence reflects the cognitive versatility and technical ability of early humans, which helped to facilitate their diaspora into middle latitudes.

Of flowers and burials. The remarkable case of the Red Lady of El Mirón

Did the first Americans come from Bilbao?

Dealing with fire in microgravity