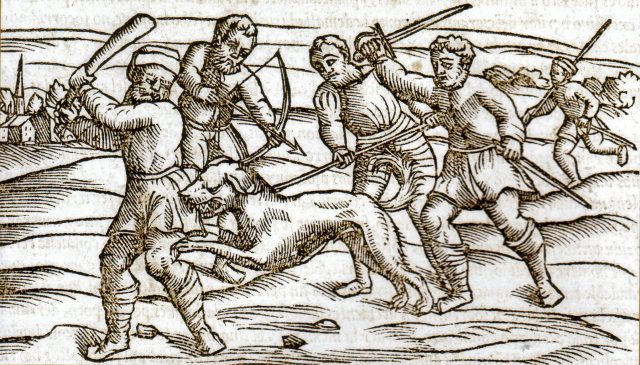 Rabies is a fatal viral disease largely transmitted to humans by infected animals—predominantly from domestic dogs. The contagion is usually through the saliva from rabid animals. The disease is entirely preventable through prompt administration of post-exposure prophylaxis to bite victims and can be controlled through widely applied vaccination of domestic dogs. Yet, rabies is still very prevalent in poor countries, affecting populations with deficiencies in health care. It is notoriously underreported and its economic burden is huge, impacting on public health budgets, local communities and livestock economies. Globally canine rabies causes approximately 59,000 human deaths, over 3.7 million disability-adjusted life years (DALYs) and 8.6 billion USD economic losses annually 1. 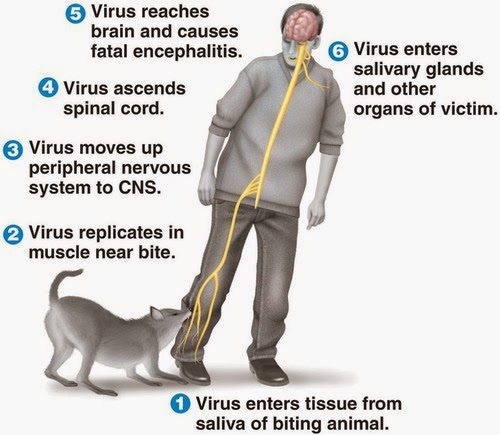 For centuries, the only treatment for the much-feared infection was wound cauterizing or amputating the bitten limb. Contrary to other viruses, rabies does not infiltrate the bloodstream but moves retrogradely along the nerve fibers until reaching the brain. There, the viruses invade supposedly the limbic system, a neural network that controls such fundamental drives as aggression, sex, hunger and thirst. It causes dramatic changes in the behavior of the victim including hypersthesia, hydrophobia, hallucinations, and wild aggressiveness. These are strategies for two basic objectives: concentrate viral particles in the saliva and pass them to other beings. Although it can be transferred through normal behaviors such as licking or sucking this is usually achieved through a bite, something that is improved through the increase in number and ferocity of aggressions.

Inn 1971 Johnson wrote 2: «The … localization to limbic system with relative sparing of neocortex provides a fascinating clinicopathologic correlate with the alertness, loss of natural timidity, aberrant sexual behavior and aggressiveness that may occur in clinical rabies. No other virus is so diabolically adapted … that it can drive the host in a fury to transmit the virus to another host animal». Aggressive behavior is nevertheless more complex and it can be elicited by damage in different regions of the central nervous system, including the posterior olfactory bulbs, the ventromedial nucleus of the hypothalamus, and the septal area. Offensive aggression, which is often impulsive and unprovoked, has been associated to low serotonergic activity and also to increased testosterone levels in human and animal studies. Heavy accumulation of rabies virus antigen was found in the midbrain raphe nuclei. Many of the neurons in these nuclei are serotonergic; i.e., contain serotonin, suggesting that impaired serotonin neurotransmission from the brainstem may account for the aggressive behavior. 3 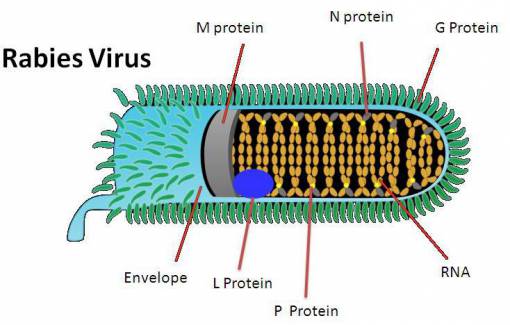 In 1992, an article by Smart and Charlton 4 compared aggressive behavior in skunks experimentally infected with either Challenge virus standard (CVS) or street rabies virus. The article concluded that only trace amounts of viral antigen was detected in many limbic system neurons —a result in contradiction with previous ideas— and marked differences were found in viral distribution between street and CVS virus. Areas which contained heavy accumulations of street rabies virus but low amounts of CVS rabies virus were the dorsal motor nucleus of the vagus, midbrain raphe, hypoglossal and red nuclei. In contrast, large accumulations of CVS virus were found in the Purkinje cells of the cerebellum, the habenular nuclei and in pyramidal cells throughout the cerebral cortex, while corresponding areas in all street virus-infected skunks contained minimal antigen. Since, in this model, street virus infection generally produces furious rabies and CVS infection results in dumb rabies, it can be speculated that the behavioral changes which occur in these two different clinical syndromes are due to the heavy and specific accumulation of virus in different regions of the CNS. CVS also produces neuronal apoptosis in widespread areas of the brain of mice after intracerebral inoculation. These results showed that regions other than those of the limbic system may be involved in the pathogenesis of behavior changes in rabid animals, including aggression.

Anatomopathological features are very subtle in rabies and it was considered that neuronal dysfunctions and not cytoarchitectonic alterations were the substrate of the severe behavioral and clinical changes observed. Widespread neuronal injury or death has not been recognized. However, recent studies have demonstrated neurodegeneration in experimental animals infected with rabies (3). Conventional histopathology showed mild inflammatory changes without significant degenerative neuronal changes but at late clinical time points, with the development of severe clinical neurological disease, microscopy showed marked structural abnormalities, including beading and/or swelling in dendrites and axons. These axonal swellings are usually composed of accumulations of mitochondria and cytoskeletal proteins (e.g., neurofilaments) suggesting that these organelles can be involved in the rabies-induced alterations. The morphological changes sufficiently explain the severe clinical disease with a fatal outcome.

Analysis in vitro has supported this idea since it found oxidative stress caused by mitochondrial dysfunction in rabies-infected cell cultures. The rabies virus genome codifies only five proteins but it has been shown that one of them, RABV phosphoprotein (P), interacts with mitochondrial Complex I leading to overproduction of reactive oxygen species, which results in injury to axons. (3) Cultured dorsal root ganglia neurons derived from adult mice and infected with rabies viruses showed axonal swellings too.

These results provide a better understanding of how rabies virus causes brain damage and how the infection promotes behavioral alterations that improves viral contagion to new hosts through aggression.