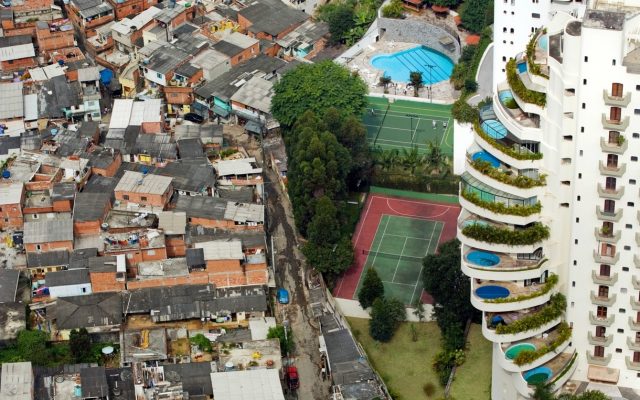 The two biggest questions in Economics are, no doubt, efficiency and equality. The first means no dilapidation of resources, the second means…, well, it may mean many things: equality of opportunities, resources, access to basic goods, or equality of results, among many others. Whatever we understand by equality, there are two major problems with its opposite, the inequality. First, it affects socioeconomic outcomes,including investment and economic growth, poverty, health and well-being, crime, conflict and social cohesion. Second, it also affects the feelings of those in the society who dislike inequality. In fact, all societies show to some extent some concern about equity, justice, and high levels of inequality. The reader may claim: there is another major problem, those people who are at the low side of the inequality. That is true, but they become the society’s problem through the first and the second of the ways just exposed.

Different societies use different policies that affect inequality, either as an unintended consequence or as part of a plan to reduce it, like fiscal policy, trade policy, minimum wages, interest rate controls, land reform, anti-discrimination legislation, affirmative action and so on. Anderson et al. (2016) 1 present the findings of a meta-analysis to understand these effects. The question is too broad, and the first task is to define it in terms we can deal with. The authors pay attention to policies that have the form of government spending aimed at reducing inequality, measured as income inequality. Further, they focus on low and middle income countries. In their meta-analysis they identify a total of 84 separate studies containing over 900 estimates of this effect. Before moving on with the findings of the study, it is important to take into account all the difficulties in this kind of studies.

There are many reasons why a policy of government spending, even if well meaning, may have poor results in terms of reducing inequality. Here are just four examples: (i) most spending on transfers may be captured by the middle class (Milanovic, 1994 2), (ii) the same may apply to subsidies, which makes up an important share of government spending in developing countries (Rhee et al., 2014 3), (iii) even expenditure on health and education may be received disproportionally in a greater part by the middle classes in urban areas (Davoodi et al., 2003 4), and (iv) the spending may be financed with taxes that, in developing countries, may counteract the effect of the spending, or may be financed via monetary expansion, causing an inflation that hurts the poor the most.

Another important issue is reverse causality. Countries with higher levels of inequality may engage in more redistributive activity. If not properly controlled for, higher inequality may be falsely attributed to government spending.

The meta-analysis is justified as results from the econometric literature appear to be inconclusive. Some studies found no evidence of a statistically significant relationship between government spending on health and education and the share of the poorest 20% of households in national income (e.g., Dollar et al. (2013), 5), while others found evidence that certain types of government spending, for example, on social welfare, education and health, do have a negative and statistically significant effect on income inequality (e.g Martinez Vazquez et al., 2012 6). One previous meta-analysis focused only on the effects of education on income inequality (Abdullah et al., 2015 7).

There are many issues that the authors need to solve regarding the studies they use in the meta-analysis. Any study to be included needs to provide enough statistical information to include its data into the new computations. Next, there is the issue of publication bias, as publications reporting some relations may be more likely to be published. Finally, they need to detect sources of heterogeneity to make the appropriate controls (e.g.: to measure inequality some studies use the Gini index, while other use share of 10% poorest.)

The authors also find some unexpected results that may help future research on the issue. First they find that little evidence that the period of time covered by the samples used for estimation makes a big difference to the results. The same happens with the inclusion of developed countries. The main exception occurs when focusing on social welfare spending, where estimates using more recent data show a more negative relationship with income inequality. Second, they find that studies using the simpler econometric technique of OLS (ordinary least squares) have a tendency to overestimate the contribution of government spending to the reduction of inequality, compared with more robust analytical approaches such as panel data methods and estimations with instrumental variables. The application of econometric tools to check for bias risk (Duvendack et al., 2012 8) found that indeed the OLS studies were classified as medium risk of bias. Finally, after a first look at the data, using funnel plot technics, the authors find that the distribution of results is symmetric enough, an indication of a non-bias set of publications. However, after closer inspection they do find some evidence that positive estimates of the relationship between government spending and the reduction of income inequality are being under-reported in the literature. Whether this is due to a tendency of not publishing results unless they are very significant or due to ideological bias is not clear. To add confusion to this matter the bias is reversed when focusing specifically on welfare spending.

Here is how the authors summarize the final conclusions:

In terms of the overall association between government spending and income inequality, after controlling for publication bias, we find that the answer depends very much on the type of spending being considered and the measure of inequality. The results show some evidence of a moderate negative relationship between government spending and income inequality, which is strongest for social welfare and other social spending, and when using the Gini coefficient or the top income share as the measure of inequality. It is important to recognize, however, that both the size and direction of the estimated relationship is affected by a range of factors. This makes it difficult to say whether or not there is on average a strong association between any particular type of government spending and income inequality. Although we have in this study been able to identify some of the factors influencing the size and direction of the relationship, it is clear that there is much heterogeneity left to explain.

The role of Government in financing health care (& 2)