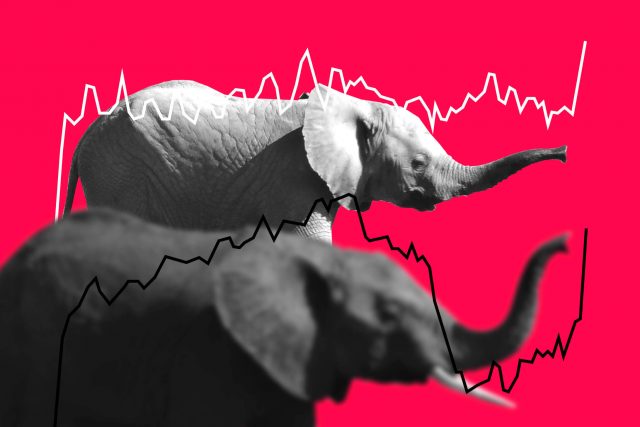 Ravallion (2018) 1 questions the thesis that globalization has been a major driving force of inequality. While this is the conclusion of two recently published books (Bourguignon, 2016 2 and Milanovic, 2016 3), Ravallion argues that their interpretation of the data is not well supported and that is even contradicted by the economic research. Here is a summary of his article.

These are the historical patterns identified in both books:

The real income change in the last decades has some peculiar characteristics. The poorest people saw a very small increase in income. As we move from the poorest to the people in the 60th percentile we observe higher gains in income. After that there is a drastic drop to almost zero gains in the 80th percentile. Things look much better for the last percentiles, the richest in the world, even if they did not gain as much as the 60th percentile. All these changes indicate that the reduction in inequality is due to the high increase of income for the population around the median (but not for the poorest) and a lack of increase for the upper middle (but not for the richest.) This particular pattern of the distributional change has some consequences for the measurement of inequality. While most standard indices (Gini and Theil) show a decrease of inequality, some other indices that consider also the aversion to inequality may show an increase in global inequality when this aversion is very strong.

If we focus on poverty rather than inequality, the data show a dramatic reduction in absolute poverty (from, 36% to 19% of world’s population), but a much less progress in reducing relative poverty and in alleviating the conditions of the poorest.

Now, the real challenge is to provide a correct explanation of those facts. According to both Bourguignon and Milanovic, one has to look to globalization to find the cause. The story goes like this: thanks to globalization developing countries incur in smaller costs to trade and have better access to financial markets. With more opportunities they can close the gap with the rich countries, at least in relative terms. At the same time, the working class in the rich countries suffers the competition from foreign countries while the middle class in the developing countries have been the big winners. This causes a rise in the inequality within each country. Is this interpretation correct? Are the reallocation of jobs and economic activity due to globalization the main cause of the observed data?

Based on recent studies, Ravallion suggests that the answer to those questions is negative, as may other things have changed during the past few decades besides globalization:

Trade openness is often a significant predictor of growth rates, but not always, depending on what other factors are included in the analysis (e.g., see the meta-analysis of growth regressions by Sala-i-Martin et al., 2004 5.) The best illustration of this is China, whose economic performance is behind much of the global changes in inequality. In this country, trade has played an important role for its sustained growth rates, but they would have been much smaller if it were not for the economic reforms of transition to a market economy and the promotion of internal trade.

The effects of globalization on the increase of inequalities within countries are also questionable. Inequality has been rising in a majority of countries in the rich world, but not everywhere. Bourguignon points to the example of France, which has avoided the marked upward trend in inequality seen elsewhere since the 1980s. France is not alone among the OECD countries; depending on the time period (and that can matter a lot), one also finds falling inequality in (for example) Belgium, Greece, Hungary, and Spain (see OECD, 2011, 6.) Developing countries show even more heterogeneity, with increases in inequality being observed about as often as decreases (Ravallion, 2014 7.) In particular, inequality appears to fall in some countries when they are opened to trade and increases in others.

The “inverted U” hypothesis of Kuznets (1955) 8 has long been influential in thinking about development policy. Kuznets argued that inequality would first increase within poor countries as their economies grew through urbanization, but after some point inequality would fall. However, the hypothesis has found rather little support in subsequent empirical work; over time, very few developing countries have followed the predictions of the Kuznets hypothesis, as shown by Bruno, Ravallion, and Squire (1998) 9 and Fields (2001) 10. Another hypothesis, introduced by Milanovic, is the idea of what he calls “Kuznets waves”, he starts by assuming that capitalist economies tend to rising inequality and that, when it gets very high, there is pressure on governments to lower it, but not when it is low. However there is no clear way to prove this hypothesis. To begin with, the Great Leveling after WWII happened just once and could be a unique period historically. Also, it lacks any explanatory power in the form of a mechanism that increases and decreases inequality and, further, that it is synchronized across many countries.

Whether capitalism is increasing inequality or not depends on initial conditions (including the distribution of endowments and how competitive markets are) and policies. There are countries with pre-reform controls that kept inequality artificially high, like in most Latin America. In other countries, the opposite was the case, like in China and the Soviet Union. Then liberalizing economic policy reforms can entail sizable redistribution between the poor and the rich, but in opposite directions in the two groups of countries. The evidence that trade liberalizations have been inequality decreasing in Latin America can be found in Ferreira et al. (2007), 11. Other variables like the access to financial products or, perhaps more importantly, technological change in unequal settings could well be a much stronger force to explain the patterns of inequality. Policies have mattered to both growing poor economies and redressing inequality within countries (like progressive taxes, income transfers and minimum salaries.) And these policies can coexist with considerable global integration. Globalization may well be getting too much credit, and being blamed for too much.

Is China a Socialist country?