Currently, most students are users of social networks like YouTube, Facebook or Twitter and have incorporated them, often unconsciously as powerful engines for capturing information, into their learning dynamics. Besides the reward of immediate feedback, they have the advantage of implying no additional costs, which makes them available for the younger population. Social networks are already being exploited for learning, discovering, searching, storing and, above all, sharing knowledge, demonstrating that they are an efficient vehicle for social learning that could be added as a competent tool for formal learning. Many students consider conventional communication channels, like e-mail, as too formal, rather adopting more dynamic platforms that urge an immediate reply.

Twitter is among the most popular social networks, integrating a community over 500 million users around the world. It consists of a microblogging service that allows sharing short messages, no longer than 140 characters, as well as including images, videos, hyperlinks to other sites, etc. Twitter is meant to produce, exchange and spread concise statements, making it one of the best platforms to share information in a very quick, efficient and collaborative way. Twitter has already been used in several educational programs and evaluated as a positive teaching experience. However, the limitation in space for postings, the casual style demanded, and the negative impact in grammatical and orthographic skills among young users, are factors that might question their pedagogic usefulness.

In this work, the authors present and analyze the application of Twitter to create a casual online space for communication and learning of basic Microbiology 1. With this aim, a team of professionals in the field of Microbiology have imparted, to our knowledge, the first massive online open course (MOOC) via Twitter. Here we assess the results of this experience using Twitter as a tool for teaching, promoting and communicating scientific knowledge to a wide non-academic audience.

Through mass e-mailing from the Spanish Society for Microbiology (SEM, Sociedad Española de Microbiología), members were invited to volunteer preparing a class within the frame of a basic General Microbiology course for a MOOC to be imparted via Twitter. A total of 30 professionals were engaged covering a diversity of expertise areas in the field (the complete list of the professors can be found here). These volunteering virtual lecturers belonged to 20 different Universities or Research Centers located in different cities in Spain, France, USA or UK. It was not a requisite for participation to have a personal twitter account: eleven lecturers use Twitter frequently but four have never use it before. 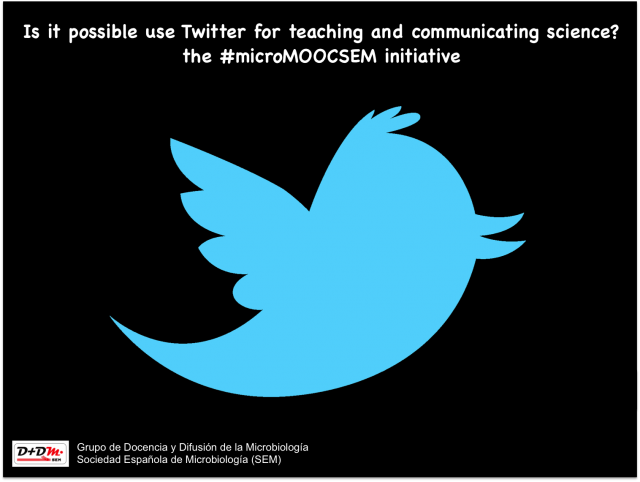 The MOOC Coordinator delivered to the rest of the Virtual Faculty Members some basic rules and instructions so that the material produced was homogeneous. Briefly, each participant should prepare a lecture consisting of a series of 30-50 sentences (tweets), each of maximum 140 characters, often including links to diverse on-line free access web pages, news, and especially images or videos. Each tweet should be written in Spanish, using a simple and concise language, meant to communicate Science to a general audience outside the academic environment. It was advised to include humorous tweets periodically to emotionally involve and motivate the reader. Three or four true/false or multiple option test questions were encouraged to be included at the end of the class for auto-evaluation. Most of the lecturers spend more that three hours to prepare the class. The hashtag #microMOOCSEM was created for this course: “micro” acknowledges both the subject under focus, Microbiology, and the fact that it is conceived for the small 140-character format; “MOOC” stands for Massive Online Open Course; and SEM is the acronym for the Society. Thus, each tweet included the #microMOOCSEM hashtag.

The course took place along 10 weeks (04/05/2016-06/08/2016), classes being scheduled all Tuesdays, Wednesdays and Thursdays at 22:00 h (GMT +1), from the @SEMicrobiologia Twitter account, so that they could be followed at convenient times in Spanish speaking countries in the American continent. Tweets were programmed by using the application TweetDeck to be posted at a frequency of one tweet per minute. Students were encouraged to follow the course through their mobile devices or computers, either live at 22:00 h (GMT+1) or later, following the hashtag #microMOOCSEM. The same hashtag could be used by the students to interact with the lecturers.

Three weeks before the start of the course, an intense promotion campaign was run through social networks, universities and scientific institutions, as well as the press and radio in diverse locations around Spain. Contacts were also made with some Latin-American Microbiology societies. There was news about this initiative in 28 different journals (paper or on-line press), 14 Science blogs, 10 institutional web pages from Universities, Research Centers or Scientific Societies, and three local radio stations.After each class was posted, tweets were compiled and stored on-line by using the open tool Storify, so that they could be consulted any time after the class was over. Once the course was completed, data were analyzed by using the open software Twitter analytics.

Comprehensively, the course has consisted of 28 lessons plus a “Graduation Party”, involving 1,225 tweets, 702 images, 265 hyperlinks to web pages and 136 videos related to Microbiology and related Sciences. Considering the total number of tweets and their release frequency (one tweet per minute), the total length of the course has been of approximately 20 hours.

Peaks coincide with broadcasting days. Some classes reached over 260,000 impressions and 3,700 retweets. However, data trend reaches a plateau in the number of impressions from the 5th week on, suggesting that longer courses may result in a decrease in followers. Along the time that the course was active, the Twitter account of the SEM has received a total of 4,420,172 impressions and over 175,000 visits. Before the start of the course, the number of followers of the @SEMicrobiologia account was 2,176 and the last day of the course it mounted to 7,240, following an exponential increment of over 330%. Certain #microMOOCSEM classes became a Twitter trending topic in Spain.

Some improvements could be implemented in future editions of this or similar courses, in view of the results of this pioneering experience. For example, the analyses on the progression of the number of followers along time suggest that to maintain the interest on the course, it should not be longer than five weeks. Other variables could also be investigated in relation to the impact, including the days of the week and/or the hour in which the classes are programmed, the use of a language different from Spanish, the involvement of virtual lecturers with multiple nationalities, as well as the use of alternative social networks like Facebook or Periscope. 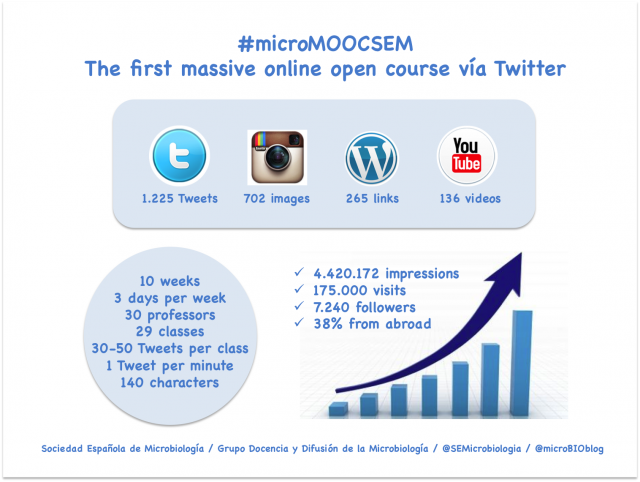 The #microMOOCSEM experience demonstrates that, when properly used, Twitter is an excellent means for collaborative teaching and active learning, as well as for establishing professional networks and the communication of Science to society.

Chimpanzees know which tool will be effective