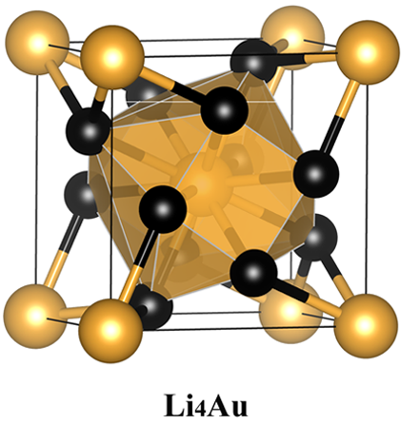 Gold is the quintessential noble metal. Its lack of chemical reactivity, particularly to acids and atmospheric corrosion, together with is rarity and malleability make it the precious metal it is since ancient times.

Today, if we go for a description of gold in a chemistry textbook, we find something similar to this:

A soft yellow malleable metallic transition element with a face-centered-cubic crystal structure. Because it is quite chemically inert, being unaffected by oxygen, it is found as a free metal in gravel or in quartz veins, and is also present in some lead and copper sulphide ores. It also occurs combined with silver in the telluride sylvanite, (Ag, Au)Te2. It reacts with chlorine at 200 ºC to form gold (III) chloride. Gold may also form complexes in the +1 and +3 oxidation states.

Or almost. The reality is that there is a much more rich and interesting chemistry of gold waiting to be discovered, including high negative oxidation states. Now, a team of researchers that include Aitor Bergara, from CFM (CSIC-UPV/EHU) and DIPC, has predicted 1 the existence of alkali metals aurides with unexpected stoichiometries and a highly electronegative gold.

Gold is not only related to jewellery and ornament. Actually, gold has a rich chemistry under certain conditions and can form diverse compounds that have many uses in medicine, catalysis, electron transport, luminescence, nonlinear optics, and electronics. In fact, the chemical properties of gold, in some aspects, are different from that of the other metals, and the main differences are the consequence of the relativistic effects. The expansion of the 5d orbital favours the formation of +3 oxidation state, but also a higher + 5. As such, the closed shell 5d10 of gold opens up, and it becomes chemically reactive with other elements in molecules or clusters.

What is less known is that the contraction of the 6s orbital makes gold have the highest electronegativity among all metals and enhances its trend to present a negative oxidation state. However, the only known negative oxidation state of gold is Au−, with an electron configuration 5d106s2, that is, isoelectronic with Hg, Tl+, and Pb2+. Till now, many compounds containing Au− have been found: CsAu, Rb8AlO4Au3, A3AuO (A = Rb, Cs), and others. These compounds show interesting structural and electronic properties.

All of these compounds with Au− anions have been synthesized just at or near ambient pressure. But it is the case that the application of pressure can overcome activation barriers for chemical reactions, reorder atomic orbital energy levels, induce structural phase transitions, and modify electronic properties. However, the search for new compounds should not be blind, and the guidance of first-principles structural prediction methods is extremely helpful when it comes to know what to expect.

The researchers pursue higher negative oxidation state of gold conducting an extensive structure study on stable Li−Au compounds with various LinAum (n = 1−6 and m = 1, or n = 1 and m = 1−6) compositions under pressure by using the swarm-intelligence based first-principles structural prediction calculations.

These calculations show that Li4Au and Li5Au compounds which are stable under high pressure. In these Li-rich compounds, Au is in > −1 state by receiving more than one electron from Li, and it behaves as a 6p-element, having a 5d106s26pn (n ≥ 1) electronic configuration. Moreover, the negative oxidation states of Au can be effectively tuned from −1 to −3 (or even higher) by varying the Li compositions at certain pressures.

Under reasonably high pressures, gold can also form intermetallic compounds with other alkali metals (i.e., Cs), where gold also behaves as a p-element.

This work shows that applying pressure becomes a controllable method for achieving unusual negative oxidation states of Au, opening a path to the discovery a new and fascinating chemistry.