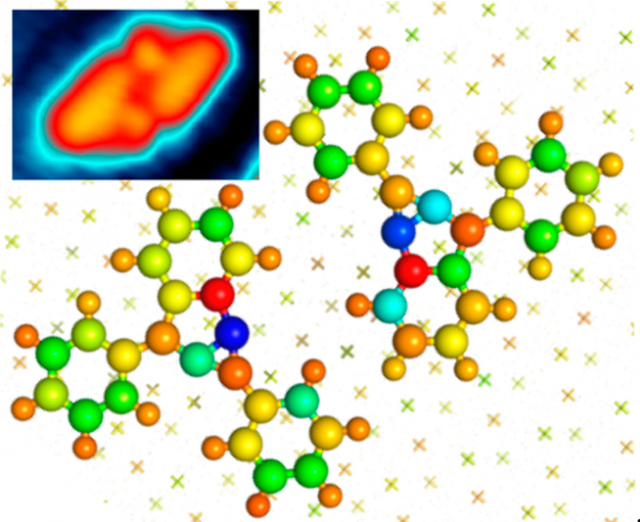 Enediynes are organic compounds containing two triple bonds and one double bond. The enediyne groups in those compounds are often called warheads. Why this name? Because, many of these compounds are capable of undergoing Bergman cyclization or, in other words, if heated they form a ring compound from a chain by formation of a new bond. The resulting diradical, a 1,4-dehydrobenzene derivative, is capable of abstracting hydrogen atoms from the sugar backbone of DNA which results in strand scission. This high reactivity with DNA makes the substances toxic. But it is precisely this feature what makes them interesting enough to be researched as antitumor agents.

The interest in enediynes and how they form rings goes beyond cancer research, though. Actually, the cyclization of enediynes has become a relevant isomerization process in many disparate research fields. For example, in medicine apart from cancer research enediyne cyclization is a bioactive process observed in natural antibiotics and is thus of great interest in drug design. But it is also a valuable tool in materials science where it is used for the synthesis of extended conjugated polymers.

One thing is clear, a deep understanding of the microscopic mechanisms of these cyclization reactions would greatly promote their technological use in fields such as medicine, biochemistry, and nanotechnology.

Exploration of the reactions on surfaces has allowed their direct visualization at the single molecule level by scanning probe microscopy, providing key insight into reaction mechanisms. Most of the systems studied, however, have been chemically complex and render a large number of different products. Now, an international team of researchers, lead by Ikerbasque professor Dimas García de Oteyza (DIPC), has studied 1 the thermally induced cyclization of a simpler enediyne, namely, 1,2-bis(2-phenylethynyl)benzene (BPEB), and the subsequent noncovalent self-assembly of its cyclization products.

The sublimation of a submonolayer coverage of BPEB onto Au(111) held at 293 K renders a surface decorated with discrete molecules as shown in scanning tunneling microscope (STM) images (Figure 1a). Density functional theory simulations indicate that the molecules remain unchanged upon deposition onto the gold layer at that temperature. Upon annealing to 353 K (80 º C), a chemical transformation of BPEB is induced, yielding a new surface morphology as shown in Figure 1b, where the majority of products associate into dimers. Only molecules adsorbed at the surface’s reconstruction dislocations (herringbone kinks) and rare isolated molecules on the surface (as highlighted by an arrow in Figure 1b) remain as product monomers.

Close-up images of the dimer aggregates and of the less frequent product monomers are shown in Figure 2j and 2a, respectively. The image contrast of the dimer complex corresponds to two monomers positioned side-by-side. This proves the noncovalent nature of the dimerization, since otherwise the new bonding structure and the associated changes in electronic properties would be reflected in a substantially different contrast in the STM images. Remarkably, virtually all reactant molecules transform into the same product structure, in sharp contrast to cyclization studies performed with the same precursor in solution or with more complex precursors on surfaces.

The possible transformations that BPEB may undergo upon thermal activation are displayed in Figure 3a. In a first step, C1−C6 (Bergman) or C1−C5 (Schreiner−Pascal) cyclization can lead to the biradical intermediates 2 and 5, respectively. For each of these two intermediates, a [1,2]-phenyl migration yield the stabilized products 3 or 6. Finally, the biradical 3 may further undergo an isomerization to yield the strained benzannulated bicyclic diene 4.

The researchers conclude that the dominant reaction mechanism is a C1−C6 cyclization that leads to monomer 4 after a phenyl shift. Product 4 is a highly polarized bicycle with a large in-plane electric dipole moment that plays an important role in the subsequent association and antiparallel arrangement of noncovalent dimer complexes.

One important parallel conclusion of this work is that it highlights the limitations of gas-phase calculations to predict reactivity on surfaces, in particular when intermediate species are chemisorbed.