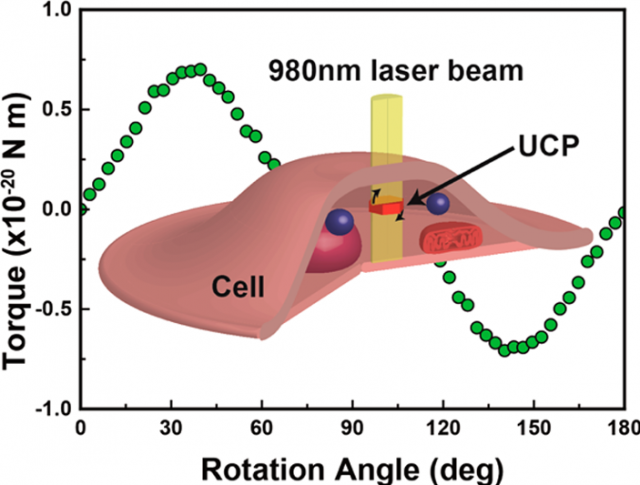 How would you measure the dynamic viscosity of cytosol, the liquid inside the cells, without destroying the cell? It seems not an easy task. However, a team of researchers that includes Nuno de Sousa (DIPC & IFIMAC), has just provided 1 a way of achieving this and other similar feats using upconverting particles.

An optical trap is any device that can trap small particles using electromagnetic radiation. When a nonspherical particle is optically trapped, stable position and orientation within the optical trap is achieved when the total optical forces and torques simultaneously vanish. Any slight displacement or rotation from this stable position (produced by, for instance, thermal energy) will be compensated by the appearance of a restoring force and torque that will return the particle to its stable state. While force equilibrium determines the stable position within the trap, torque equilibrium would determine the orientation of the trapped particle within the optical trap. Add to this that optical forces (in the order of pN) are comparable to those exerted on organelles inside cells, and you have a way of measuring things at subcell level.

Full understanding on the optical torques appearing within optical traps requires the combination of experiments (observations of the stable orientation of the trapped particle) and numerical calculations (to determine the dominant mechanism causing this orientation). In this sense, nonspherical upconverting particles are excellent probes. They show a highly polarized emission that allows for straightforward determination of their orientation when optically trapped by single particle polarized spectroscopy. Despite its applied and fundamental interest, the knowledge about optical torques in nonspherical particles is far from complete.

The team of researchers studied experimentally the optical torques exerted on hexagonal β-NaYF4:Er3+,Yb3+ upconverting particles inside a single beam infrared optical trap. Their radial and axial stable orientation was determined by real time single particle polarized spectroscopy. The stable orientation states was used to identify the different optical torques acting on the particle. Furthermore, the physical mechanisms leading to the appearance of optical torques were identified from the comparison between experimental data and numerical simulations.

They found that a stable situation is achieved when the optical axis of the upconverting particle orientates parallel to the electric field vector of the infrared trapping radiation. Numerical simulations confirmed the existence of this stable configuration and provided an estimation of the magnitude of the dominant optical torques. Simple calculations concluded that the rotation of the studied upconverting particle inside the optical trap was mainly governed by dipole magnetic interactions.

With all these information, the researchers were able to investigate experimentally the rotation dynamics of optically trapped upconverting particles in different viscous media, first, and then inside living cells. Using both passive and active methods they got an estimation of the static and a dynamic cytoplasmic viscosity, respectively.

The team found that the dynamic viscosity decreases with the rotating frequency in the studied range of frequencies. The values were in reasonable agreement with previous results.

Inside a cell, no one can hear you turn into an infective zygote

How to measure tiny temperature differences using a Josephson junction