Syphilis is a sexually transmitted disease caused by a spirochete, a bacterium, Treponema pallidum subspecies pallidum. The main route of infection is by sexual contact but is also transmitted from the mother to the newborn in what is known as congenital syphilis. If syphilis is left untreated for years the treponema may invade the brain or spinal cord and neurosyphilis may occur. At the moment it is very rare but before the discovery of penicillin it was an unfortunately frequent situation. In the nineteenth and early twentieth centuries the number of people infected with syphilis was estimated to reach up to 15% of the population. Although sexually transmitted diseases always have a clear stigma and are often kept hidden, it seems that there are evidences (personal diaries, medical records, correspondence …) – according to Deborah Hayden 1 – that among the famous people who could have syphilis are Abraham Lincoln, Adolf Hitler, Friedrich Nietzsche, Oscar Wilde, Ludwig van Beethoven, Franz Schubert, Robert Schumann and Vincent Van Gogh. Other cases suspected or known are Charles Baudelaire, Karen Blixen, Napoleon Bonaparte, Caesar Borgia, Al Capone, Giacomo Casanova, Gaetano Donizetti, Gustave Flaubert, Paul Gauguin, Howard Hughes, Édouard Manet, Guy de Maupassant, Bedřich Smetana , Leo Tolstoy and Henri de Toulouse-Lautrec. With respect to Spaniards, the first suspected case is that of Martín Alonso Pinzón, who allegedly would have brought, together with some crewmates, the syphilis of America to Europe upon their return from the voyage of Discovery and would have been responsible for the first great epidemic of syphilis registered in Europe between 1494 and 1496. Those sailors with a girl in every port! 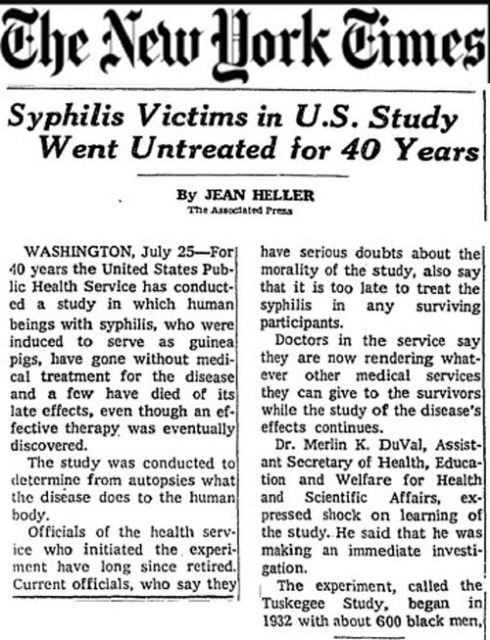 The Tuskegee syphilis study in Macon Country, Alabama, has been described as an egregious case of blatant racism. In a long research project, 600 «braceros» from Alabama were deceived and observed for years to see the natural evolution of syphilis even though there were already effective treatments. The study was initially designed to last for 6 to 8 months, but it turned into a long-term study that continued for 40 years. The arsenic and bismuth compounds (metal therapy) used for treatment at the time were not offered to the men. The aims of the study were never clearly stated, but they certainly included documenting whether the disease had a different course according to race. When penicillin became available in the 1940s and 1950s, it was also withheld.

In 1972, forty years after its beginning, the Tuskegee syphilis study finally leaked to the press and was immediately canceled. The investigations concluded that people included in the study were not warned that they had syphilis and some of them were not even treated. Victims of the study included numerous men who died of syphilis unaware of the disease, women who contracted the disease when their partners inadvertently infected them, and children who were born with congenital syphilis.

The Tuskegee experiment has always had its defenders. Some of them rushed to justify it when the study first came to public attention in the 1970s. In the 21st century, cultural anthropologist Richard Shweder and physician Robert White have proffered a fresh defense, suggesting that the study was neither unethical nor racist 2. Shweder largely confines himself to questioning the received account of the Tuskegee study (and pointing out the myths) and is receptive to debate. White puts forward alternative evidence on empirical matters but accepts some of the received account, including the charge that the men were deceived, By contrast, the Tuskegee experiment has been a model of unethical practice for a generation of physicians and researchers. The scientific claims of its defenders are largely based on incomplete or misinterpreted evidence and exaggeration of the uncertainties of science. First, the defenders assert that treatment at the time the studies started (and throughout their course) was of uncertain value and hazardous. In fact, the evidence available in 1932 indicated that treatment of latent syphilis with arsenic and bismuth compounds substantially reduced the risk of tertiary syphilis. By the mid-1950s, the USPHS recommended that penicillin should be used for all stages of syphilis. It is not plausible to propose that the study investigators, who worked for the USPHS, would have had clinical grounds for withholding penicillin from the Tuskegee men once it became available. The latest revelation about the involvement of Tuskegee investigator John Cutler in deliberately infecting people with gonorrhea and syphilis in Guatemala in the 1940s should have put an end to defenses of the ethics of those investigators. The defenders’ political arguments mistakenly claim that identity politics clouded the original critiques; in fact such politics opened the eyes of the public to exploitation. The moral defenses demonstrate an overreliance on codes of conduct and have implications for research ethics today.

A last episode continues recently the shameful story of the Tuskegee experiment. When the study was revealed by the Associated Press in 1972, the victims sued, and a settlement was reached. 6,000 heirs of the roughly 600 men who were involved in the study received payments through the decades, but an undisclosed amount of mainly interest earnings remains in court-controlled accounts. All of the victims have died nowadays. These men wanted to be remembered in a memorial that told their story and a county-owned history museum was established. The victims’ names are emblazoned in a circle on the floor of the museum, which only opens in the summer because of funding shortages. The Trump administration is opposing an attempt to use unclaimed money from that legal settlement over the government’s infamous Tuskegee syphilis study to fund the museum 3. The justice department argued in court documents recently that providing the money to the Tuskegee Human and Civil Rights Multicultural Center would violate the agreement reached in 1975 to settle the class-action lawsuit. Some descendants of the men have said they support using the settlement money to help the museum, while others like the idea of a new memorial at Tuskegee University, where the study was based. Others want new medical screenings on relatives. No decision was reached.

At the edge of the cliff: no new antibiotics for multidrug-resistant bacteria