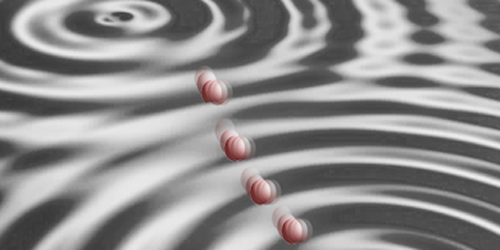 The ability to trap and control particles with the help of well-controlled electromagnetic fields has led to revolutionary advances in the fields of biology, condensed- matter physics, high-precision spectroscopy, and quantum information, enabling unprecedented control both in the study of isolated single particles as well as in few and many-body systems subject to controlled and tunable interactions. Prominent examples range from using optical tweezers for probing the mechanical properties of DNA to the realizations of Bose-Einstein condensates and numerous breakthrough investigations of strongly correlated quantum many-body systems with both trapped ions and ultracold atoms in optical lattices.

The ever-improving control of materials and fabrication of semiconductor nanostructures has led to a proliferation of quasiparticles in such systems and a quest to trap and isolate them in order to gain deeper insights into their properties and interactions.

A quantum dot is a nanometric crystalline structure of semiconductor materials. In a quatum dot electrons are confined in a region of space, thus creating a well defined structure of energy levels that depends very much on the size and shape of the quantum dot. This structure resembles that of atoms, that is why sometimes quantum dots are also called artificial atoms. While quantum dots have been developed into excellent traps for charged and neutral quasiparticles and have contributed to a wealth of exciting insights, scaling them to the many-body regime remains either a fabrication or an operational challenge.

On the other hand, and while an optical approach may be feasible, surface acoustic waves have recently been used in a range of exciting experiments to trap electrons or excitons in moving potentials. These acoustic waves involve phonon-like excitations bound to the surface of a solid and are widely used in modern electronic devices, e.g., as compact microwave filters. But the limits imposed by the speed of sound and the finite size of the samples make the time the particles remain trapped too short to be really useful.

The search for trapping mechanisms that bring the generality and flexibility of optical lattices to the solid-state setting has led a team of researchers, including Ikerbasque research professor Geza Giedke (DIPC), to propose and analyze 1 engineered stationary and quasistationary (movable) acoustic trapping potentials and acoustic lattices as a generic strategy for trapping, cooling, and controlling quasiparticles as well as a potential on-chip, solid-state platform for the simulation of quantum many-body systems.

The researchers use the generation of an effective standing-wave lattice for electrons as the main example of the technique, but the theoretical approach generalizes immediately to other trap configurations. In particular, focused surface acoustic waves might allow for the generation of quasi zero-dimensional traps for electrons akin to optical tweezers.

The basic scheme involves counterpropagating surface acoustic waves that are launched in opposite directions from two (or more) standard interdigital transducers patterned onto a piezoelectric substrate (Figure 1). Because of the intrinsic piezoelectric property of the material, the surface acoustic waves are accompanied by a (time-dependent) periodic electric potential and strain field, generating a well-controlled potential landscape (of the same spatial and temporal periodicity) for electrons confined in conventional quantum wells or purely two dimensional crystals. This electron’s potential landscape can effectively be described by a time-independent pseudolattice, the researchers show. Hence, the electron will effectively be trapped close to the potential minimum if its wave function spreads slowly enough such that it is still close to its original position after one oscillation period of the surface acoustic waves field.

In other words, the scientists propose and analyze the formation of an all-solid-state, flexible and generic acoustic lattice with a highly regular periodicity set by the surface acoustic wave wavelength (without any further gate patterning) and develop a theoretical framework reminiscent of trapped-ion physics thus connecting two previously unrelated fields of research. By combining the control and flexibility of surface acoustic waves with the rich variety of material properties of heterostructures, the emerging field of quantum acoustics opens a large number of further research directions with the ultimate goal of understanding the behavior of correlated electrons in technologically relevant materials and molecules and building a universal quantum simulator.