The concept of mean free path is very simple and straightforward: the average distance travelled between collisions by the molecules in a gas, the electrons in a metallic crystal, the neutrons in a moderator, etc. Assuming a couple of things about, for example, how elastic collisions are, it is not difficult to arrive to formulas that will give you the MFP for any system. Such a law for electrons in a solid has long helped researchers determine the size of nanoscale objects. Now, experiments show that it is less general than previously thought.

As an electron moves through a medium (gaseous, liquid, solid, or plasma) it will interact, with various degrees of elasticity, with phonons, plasmons, nuclei or other electrons. The resulting MFP of electrons determines many physical phenomena on all energy scales. Hence, MFP of electrons plays a key role in numerous areas of science and technology, from nanoelectronics to cancer treatment.

At or near the Fermi level in a solid, the MFP is a key ingredient to the transport properties. At somewhat higher energies (several eV), where electrons can overcome the minimum energy needed to remove them from a solid to a point in the vacuum immediately outside the solid surface of a material and escape into the vacuum – workfunction, for short , the MFP determines from which depth below the surface an electron can escape. Thus, the probing depth of electrons in a microscopy experiment, the electron escape depth in photoemission ones, the efficacy of electron emission in electron sources and electron multipliers, and the spatial extent and resolution of electron interactions in Scanning Electron Microscopy, all depend on the electron MFP.

At higher energies yet (1 keV to 500 keV), the MFP is of key concern in transmission electron microscopy, and in plasmas for the interaction of energetic electrons with other plasma constituents and the solid surfaces in contact with the plasma. Finally, in the few MeV energy range, the relatively short MFP is useful in electron beam treatment of super cial cancers.

As with any other MFP there is a formula. In this case, for electrons with vacuum energies from just a few eV to tens of keV, the MFP in solids is often assumed to be described by a `universal’ curve, which implies the MFP to depend strongly on energy, but only weakly on material [1]. This `universal’ curve shows a minimum in MFP at energies of a few 10’s of eV, increasing at both lower and higher energies.

This `universal curve’ is widely accepted despite a dearth of experimental data below 30 eV. But, as any life coach will tell you, do not take anything for granted. Or, as any seasoned experimentalist would put it, only when we measure, we know. 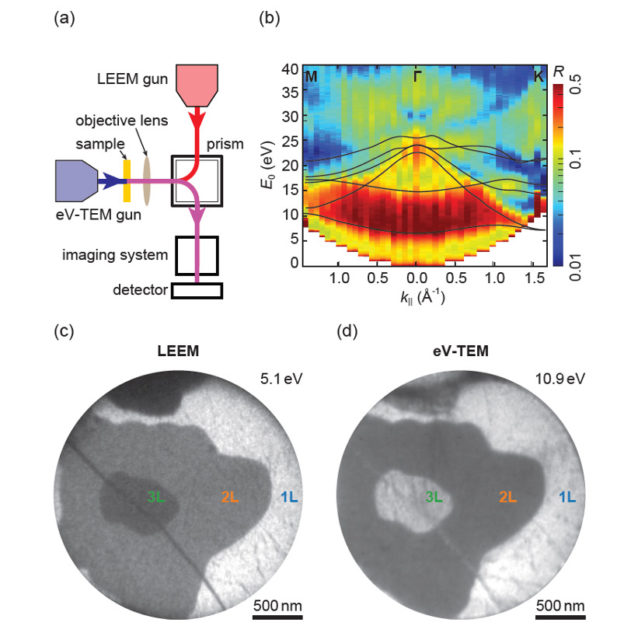 A team of researchers has just done that, namely, measuring 1. In particular, they have explicitly measured electron propagation through few-layer graphene by recording the energy-dependent reflectivity and transmissivity in this low energy range directly. They demonstrate that the electron MFP strongly depends on electronic material properties in contrast to the `universal’ curve.

The team shows that the electron MFP changes greatly with the number of graphene layers and thus electronic interlayer resonances. It should come as no suprise that the motion of electrons through solids would be intricately linked to band structure – something specific of the material – and, therefore, that electron mean free paths cannot be universal. But, again, the obvious becomes really obvious if, and only if, you measure it.

These results will impact a broad range of scientific and technological realms: from computer chips to particle colliders. As Wolfgang Werner puts it in this piece for Physics: “One example is extreme ultraviolet (EUV) lithography, the next-generation technology for printing computer circuits. […] The result could also be useful at particle storage rings (such as the Large Hadron Collider), where researchers are evaluating the use of graphite layers to mitigate the emission of low-energy electrons due to synchrotron radiation hitting the walls of the accelerator cavities”.

Breakdown of the free electron gas concept for electronic stopping

Towards a universal quantum simulator: acoustic traps for quasiparticles