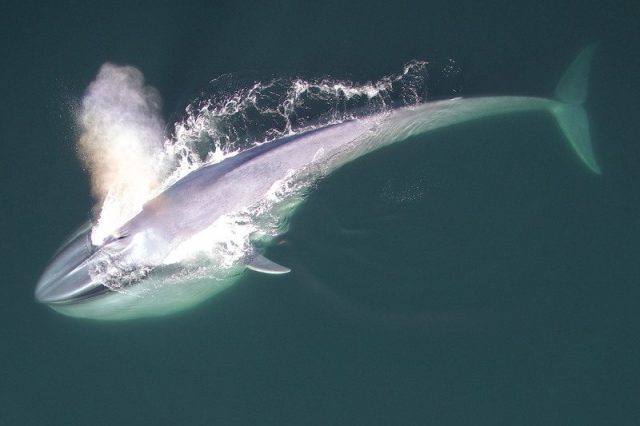 Blue whales, who normally exhibit a right-side bias, change to a left-side bias when feeding on small crustaceans. Researchers attached cameras, hydrophones and sensors to blue whales and noticed that they typically roll to the left during feeding, likely to allow their dominant right eye to more effectively go after krill.

Dark streaks seen on Martian slopes may not be evidence of water after all. Instead, the streaks may be caused by granular material such as sand flowing down the sides of hills after they’ve reached a particular height.

Concentrations of five microRNAs in saliva yielded 85% accuracy in identifying youths whose concussion symptoms persisted one month after injury, compared with about 65% accuracy using the Standardized Concussion Assessment Tool 3. The findings were based on data involving 52 children with concussions ages 7 to 21.

Compact sediments along the Cascadia Subduction Zone off the coast of Washington state and northern Oregon could lead to powerful earthquakes and tsunamis, a study shows. The sediments are packed tightly with little water, making tectonic plates more likely to stick together and build up a lot of stress.

New unicellular species may give insight into eukaryotic evolution

A recently identified unicellular species represents a whole new lineage in the eukaryotic tree of life. The tiny Ancoracysta twista, which was found on a brain coral in an aquarium, may help researchers learn more about how eukaryotic life evolved.