The most used mechanism to guarantee universal education in a country is by providing free public education, where public means both publicly financing and public provision. Milton Friedman (1962) 1 made the case to keep the public funding but make the provision private through a system of school vouchers. Say that the State spends 100 per student in the public system, then the State can offer each student a school voucher for 100 to spend in the school of their choice. The State makes the same effort to finance universal education, but now private schools will compete to attract the most students and get their vouchers. Competition among schools will improve the quality of the education and will use the resources more efficiently than the government.

At least, that was the idea, extrapolating the good properties of competitive markets in the absence of important market failures. Since Friedman, the theoretical literature has developed different models to analyze the possible impact of a school voucher mechanism under different scenarios. One feature remained constant in all of these studies: the laisser-faire design will sort students by income and ability. Other consequences depended on the design of the system. 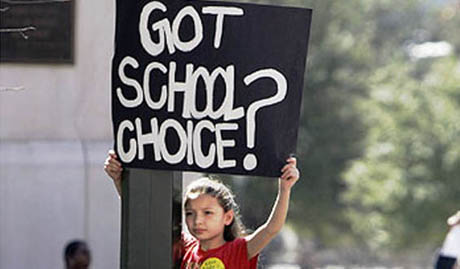 In a recent article, Epple et al. (2017) 2 review the empirical research on voucher programs. While they find mixed results, the authors are able to provide indications about how to limit some of the negative outcomes while preserving the positive ones. In their words, the research that has analyzed these programs seeks to answer five fundamental questions:

The research literature covers programs in a variety of countries, including the US, Colombia, India, Chile, Denmark, the Netherlands, New Zealand, Sweden and Canada. There are both small-scale and large-scale programs, programs funded by tax revenues and programs funded via tax credits, while still others are funded by private foundations. Finally, programs differ in their design: some allow the school to impose other charges, while others do not; some require the school to conduct a lottery when they have an excess demand, while others let the school choose the students; some targeted a group of students, and other targeted a different group or none at all, and so on. This is the summary on the different questions:

Question 1: The results are not clear-cut—in many cases and for many outcomes transferring students to private school does little to their achievement; in others, it improves or lowers it substantially. In addition, the most rigorous research on this question do not reveal the mechanisms that account for the differences, making it hard to draw clear implications. It is relevant to point out that the evidence—particularly that from the United States—is consistent with vouchers improving some types of skills more than others. For example, it is possible that the positive effects on graduation rates in the United States stem from improvements in noncognitive skills, while the lack of a consistent impact on test scores points to weaker impacts in a cognitive dimension.

Question 2: The evidence suggests that, perhaps not surprisingly, vouchers can result in the nonrandom reallocation of students across and within sectors. That said, the details of program design clearly matter. For one example from among large-scale programs, Chile’s design generally facilitates sorting more than Sweden’s. One of the features of Chile’s vouchers program is that it allowed schools to operate for profit, but a causal relation with the higher segmentation cannot be established.

Question 3: Several studies of public-school response to voucher-school competition have measured intensity of competition either by the proportion of a public school’s students who are potentially eligible for vouchers, or by the proximity of private-school alternatives. Virtually all of these studies find that public-school achievement increases with the intensity of treatment. That said, most of these analyses do not have an iron-clad strategy to deal with potential biases from composition effects (which could be significant, according to the studies) or with potentially confounding policies such as accountability.

Question 4: In high-income countries, research on the impact of small-scale programs on test scores exhibits no consistent, robust pattern. More encouraging results on the effect of small-scale programs come from developing countries. Colombia and India provide the most positive results; in the case of Colombia, because of the higher test scores, and in the case of India because, although the test scores did not increase much, they were obtained at a third of the previous cost with no distributional effect. However, the causal connection cannot be established and the improvements in India are difficult to extrapolate to other countries (in fact, those effects have not been mirrored elsewhere) due to its dysfunctional education system.

Large-scale programs yield a variety of results. For instance, Chile’s performance did not improve in the first twenty years after the voucher reform, but its scores increased substantially from 2003 to 2011 (the second highest growth among the forty nine countries in the study), a period that included a reform to increase the vouchers for low-income students, and to eliminate tuition top-ups for these students as well as selective admissions. In Sweden, however, the picture is distinctly more negative as the country has seen significantly deteriorating performance in the years since vouchers were implemented.

Question 5: The authors report some empirical studies regarding the support for vouchers programs in California. A theoretical prediction is that a voucher would cause house prices to fall (rise) in neighborhoods with high (low) quality schools. The studies indeed find that house owners in districts with a housing premium 15 percent above the average would be 8 percent lower than in a district with a housing price premium 15 percent below the average. The support for vouchers also changed depending on whether the respondent had children in private or public schools. Households with children in private schools are much more supportive of the voucher than those with children in public schools. In both cases the support increased with the quality of the public schools in their districts. In the US, virtually all proposals were in states where the Republican Party controlled the legislature, and among those, the successful proposals were in states with relatively more conservative Republicans. The studies also find evidence that voucher proposals focused on big-city districts tend to garner more support. No studies are available for other countries.

To summarize, the evidence does not make a case for wholesale adoption of vouchers, but does strongly suggest the desirability of continued experimentation and evaluation. For research, the ongoing tasks include continuing refinement of identification strategies, investigating longer-term impacts, providing a better understanding of why effects emerge or fail to emerge, and marshaling theory and evidence to improve voucher design.