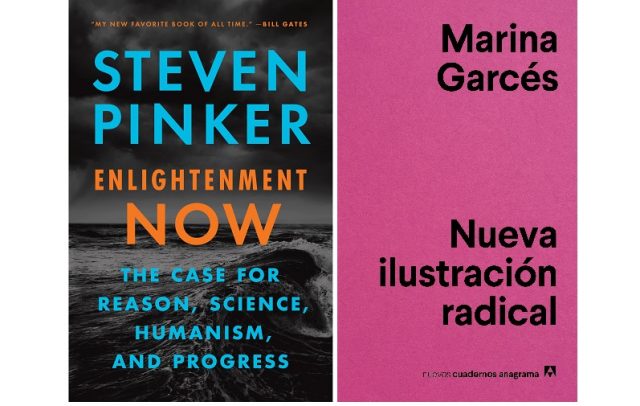 Keep in mind the word Enlightenment, because it’s very likely that it will be one of the most fashionable concepts within the next months. At a global level, Steven Pinker’s new book, Enlightenment now, will probably carry the lead in terms of sellings, comments and criticisms. But by a fortunate coincidence, its publication has been preceded in Spain by another book by the philosopher Marina Garcés, entitled Nueva ilustración radical (i.e., A new radical Enlightenment). The two books are extremely dissimilar, both superficially and in their quintessence: on the one hand, Pinker’s is an almost 600-pages-thick block full of detail and arguments, whereas Garcés’ is more a brief pamphlet than a treatise; on the other hand, both the diagnoses of the problems and the suggested cures for which something that might be called ‘Enlightenment’ is suggested by either book could not be more disparate. However these differences can be, I have found interesting, or even exciting, to offer a reflection on their common themes by comparing the approaches and claims chosen by their authors, which, after all, are two of the most prominent current public intellectuals in their respective geographical contexts. I shall divide my comment in three parts. This entry is an introduction to the ‘virtual debate’ between the two mentioned works. In the second one I will concentrate in the exposition of the facts about our current historical situation, trying to adjudicate between the extremes of the debate. The third entry will be devoted, instead, to the more philosophical, Enlightenment-related ideas and values that are sustaining each respective set of diagnoses and proposed solutions from Pinker and Garcés. 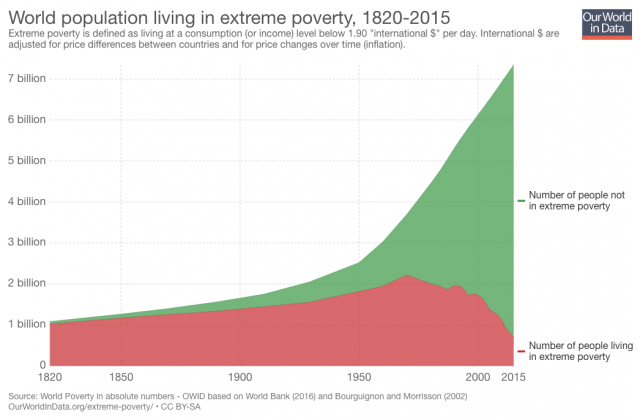 Certainly, by reading the two Enlightenment books it looks as if their authors were living in absolutely different worlds. Pinker devotes the bulk of his work (14 chapters out of 23) to illustrate with meticulous detail an impressive number of issues in which the current generations in most (or at least, in a big many) part of the world have the luck of living in a much better (and often much, much better) situation than their grandparents, nor to say (especially in the West) than their greatn-grandparents one or two centuries ago and before. Just to mention one of the most relevant figures Pinker quotes in his book: extreme poverty (defined as an individual living with less than 2 USD a day, standardized to international purchasing parity with the value of US dollar in 2011) has decreased from more to 90% of the world population two hundred years ago, to less than 10 % now (see the link to Our world in data), and the reduction has been spectacular during the last decades, for as late as 1970 it was practically one half of all the world population that live under that condition. The figures are more astounding if we do not consider the proportion of people living in extreme poverty, but their numbers: in spite of global population having doubled during the last half century, the amount of people in extreme poverty has divided by 3, passing from around 2,2 billion to around 700 million (see fig. 1). If you consider absolute economic misery as the worst of the evils to be avoided, just by mere statistics you would have preferred to live now than in any other time of the past, if you only knew in advance that you had an equal chance of ‘incarnating’ in one of the many human beings living at that time.

Pinker’s display of Enlightenment-related human progress in the last centuries and decades is by no means a naive vie-en-rose view. To ascertain the facts about life improvement does not prevent him to see that “the problems that span the entire planet are formidable. The world will have to accommodate another two billion people in the next century. A hundred million hectares of tropical forest were cut down in the previous decade. Marine fishes have declined by almost 40 percent, and thousands of species are threatened with extinction. (Polluting gases) threaten to raise global temperatures by two to four degrees. And the world has still more than 10,000 nuclear weapons (…) Progress is not utopia, and there is room -indeed, an imperative- for us to strive to continue that progress (…) And we will surely discover more harms to rectivy. The Enlightenment is an ongoing process of discovery and betterment” (ch. 20). The question is that these problems are not by themselves gloomy catastrophes, but just problems, ones that human reason, ingenuity, cooperation and negotiation will have to tackle, the same way they have been applied to produce the other astonishing facts that illustrate the rate of human progress Pinker depicts in the central part of his book, and to which we shall have a look in the next entry.

Garcés, instead, paints, or rather, sketches with a few but effective philosophical brush-strokes, a desolate and dismal landscape, which she designates with the sinister label ‘the posthumous condition’: “Our time is the everything-ends-time. We have been seeing how progress ended (…) Now we see how resources end -water, oil, clean air-, and how ecosystems and their diversity extinguish (…) Some say we are in an extinction process. Perhaps it will not be so as a species, but it will be as a civilization based on development, progress and expansion. Everyday, the media and the academic and cultural-industry debates bring us face to face to the need of thinking us from the depletion of time and from the end of the times (…) Our time is not that of post-modernity but that of unsustainability. We are not in the post-modern condition, (…but) in the posthumous condition” (pgs. 13-16).

Perhaps a debate between these two opposite views of the contemporary world are just a new example of the civilisation-old dialectics between optimists and pessimists, of the secular and boring clash between half-full and half-empty bottle-viewers. But it comes as a shock that the difference in the perceptions is so immense: it is as if Pinker not only saw the bottle almost full, but a new assortment of un-open bottles coming behind, directly from the shop, and as if Garcés didn’t see the bottle half-empty, but smashed on the floor with its last couple of cubic mililiters of wine spoiled and staining the carpet. Come on: things cannot be so different! It looks as if, more than a problem of interpreting data from different points of view, some of the authors, or both, were just blind to some kind of data. It’s a pity that Marina Garcés does not bother in collecting and presenting not even a few measurable (even if debatable and interpretable) data, since that would have made it a little bit easy the comparison between both discourses. She simply assumes that “it is evident that we are living in real time a hardening of the material conditions of life, both economic and environmental. The limits of the planet and of its resources are scientific evidences. The unsustainability of the economic system is also becoming more and more evident” (p. 26; my italics). How much would one have wished at least one bibliographic or internet reference for checking these supposed ‘evidences’!

Before entering in more detail in the next entries, let me confess a couple of anecdotal impressions. First, it is at least as evident that apocalypctic denunciations are by no means an original trend in Western culture: in the sixties we were certain of entering soon in a ‘nuclear winter’ and in a ‘population bomb’; in the seventies the ‘limits of growth’ vogue did assure us the absolute collapse of the economy and the planet no later than by the end of the 20th century; in the nineties we were all ripe to die roasted by atmospheric ozone depletion; and this is just to mention some crazes of which I have had the opportunity to be a living spectator. As with the shepherd that cries ‘wolf’ too often when no wolf comes, it’s just hard for me to be credulous to those alleged ‘evidences’ of a catastrophic immediate future, especially if nothing else than a few well-sounding laments are offered as argument. Just comparing the material conditions of life when I was born (1963) with the ones most people in the West (and many people elsewhere) have now, is striking and lets you think twice when you heard our times be called ‘posthumous’ or anything like that: amongst the many things my parents and their closer relatives couldn’t enjoy by then there were things as basic (for us, now) as a phone, TV, washing machine, electric fridge, gas or electric kitchen (they had a coal one), a car, holiday trips, record player, high school studies, shower, books (besides a fistful), dinners in restaurants… not to mention flight tickets, university degrees, and the many things that technological progress and economic competition have provided since then and most of us didn’t dream in the sixties that they could exist someday. And I wasn’t born in a particularly ‘poor’ family, since probably our income was close to the median, nor lived in a remote, primitive village, but in the very core of Madrid.

The second anecdote is the following. I remember attending a graduate course in the mid nineties with one of the most important economists of Spain. Commenting about the likely evolution of the world economy in the coming years, I bravely expressed my conviction that we were on the verge of a devastating energy crisis, for China had been growing spectacularly during the last decade, and adding a billion new people to the consumption standards of Europeans (not to talk about the transition of ex-Soviet republic to a market economy) would surely exhaust all the world oil reserves. My professor doubted: “I don’t see any shadow of worry about that in the near future”, he told. Two and a half decades later, when the purchasing capacity of Chinese people has multiplied by more than 4 since then (passing from approximately 2.000 US

-base 1999-), and the total Chinese real GDP has grown more or less by a ten-fold (from about 2 billion

), and yet we can still go without much of a problem to fill our cars to the petrol-station… well, I have to confess that now I think that my professor was much righter than me. Evidences like that had made me be much less credulous about disaster prophecies than I was in my youth.

Our world in data: extreme poverty.

The Enlightenment wars (2): the details