In our previous entries, we asked why it is that collaborating scientists prefer to publish one single paper in which all their contributions are ‘mixed’, instead of one individual paper by each co-author (with quotations to the other collaborator’s paper where necessary). There is a relatively obvious (but, as I shall show, partial) answer to this question: perhaps the ‘fragments’ or ‘sub-arguments’ of a complete paper are not publishable, i.e., are not relevant enough to deserve publication according to the views of journal editors (it is important to note that is a matter of mere relevance, not of epistemic validity of the fragments, for, as regards the latter, we have to assume that it is at least as high as the validity of the full paper to which they belong, if this has actually been considered to be apt for publication). But this answer is partial because it takes as given the threshold of relevance journal editors have, and this is just a convention that might have been different. After all, there is no natural line that can serve to ‘cut arguments at their joints’, no place where we can absolutely assert that an argument begins or ends, since its premises must also receive support, and from it, new conclusions might be derived. The question is that, considered from a global point of view, any research field can be seen as one single ‘long argument’, one that is massively entangled, certainly, with premises entering from countless places and nodes ramifying almost without end. The ‘state of knowledge’ within a discipline at a particular moment would just consist in the state of validation of every single link and node in this gargantuan network of arguments. Each scientific paper contributes to this network with just a few nodes and links, but, obviously, always with more than just one new node or link. Our question, hence, is: what determines whether a particular fragment of the ‘one long argument’ (containing more than one step, so to say) is relevant enough to get the right of being published as one ‘autonomous’ piece of argument?

My guess is that this (i.e., the typical length of a scientific argument that can be publishable as an independent paper) basically depends on two things. In the first place, the technology that is used to communicate the arguments, and the costs (particularly the cognitive ones) associated to it, can make it that some argument ‘sizes’ become more appropriate than others for communication, storage and ‘linkage’ of scientific information. In the second place, and more importantly, scientists attempt to be recognised for important discoveries, and the most approximate measure of that importance is the number of times the discovery is employed in further research activities; so, the main goal of a scientists in building up an argument is not only that each step she adds is well grounded, but that at least one of those steps becomes a premise in other papers written by colleagues, the more the better. So, whereas from the logical point of view an ‘intermediate’ conclusion is, considered as a step in an argument, just a ‘conclusion’ as the other steps are, the author or authors of a paper will not consider its ‘fragments’ as the particular piece by which they want to be recognised, even if each of these ‘fragments’ could be given the structure of a complete argument. They are pursuing a specific conclusion. It is true that each ‘fragment’ might be published independently, and cited in the rest of the ‘fragments’ (at least), but the intermediate conclusions leading in the discovery the co-authors are pursuing would very likely not receive as much recognition as this discovery itself. 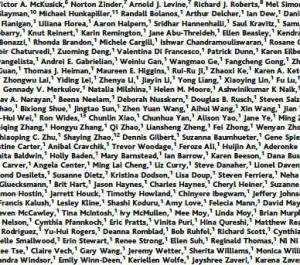 Let’s visualize this through an extremely simplified example. Suppose that you and I are collaborating in a mathematical research, in which we are trying to find out a good answer to an important scientific problem. We provide a compelling argument showing that Q is that answer. Our argument can be decomposed in two sub-arguments, one showing that P is the case, and another showing that P entails Q. Besides some informal chatter in the bar, during which we have exchanged some ideas, you have basically proved P by your own, and I have done the same with P→Q. In principle, we might publish our discoveries independently, even appropriately citing the other work in our paper’s references, but this would be silly if Q is the claim that our colleagues are waiting to be proved in order to use it in their own works.

But, wait a minute: what our colleagues want is the ‘big important problem’ to be solved, since Q (if this is the appropriate solution) will be a helpful premise in their own papers; they shouldn’t care if there is a single paper in which Q is established, or if they have to use separately the premises P and P→Q from two different papers, for, after all, Q also follows from that. If they need Q, and you and I have independently proved and published P and P→Q, our colleagues will cite both papers, won’t they? Well, not necessarily. For it could be the case that another scientist proves a different couple of premises, R and R→Q, and hence the colleagues needing Q might choose either to cite our papers or this new one. So, we decide to publish together our combined argument proving Q in order to collectively own the ‘intellectual property’ (i.e., the priority right) of the claim Q.

The decision to engage in this type of co-authorship (i.e., when it is clear what co-author has contributed) depends, hence, on the weighting of costs and benefits expected by recognition-seeking researchers from two different strategies: becoming the sole author of a ‘smaller’ discovery that may be cited by the colleagues you are collaborating with (and also by an unknown number of others), or waiting for receiving partial recognition from being the co-author of a ‘bigger’ discovery (which, besides, is uncertain because you can not know for sure that your co-authors will be successful in their ‘fragments’). The clearer it is for a group of researchers that this second option will give more recognition to all of them than the former, the more likely it will be that they become co-authors.

Co-authorship, hence, gets its rationality partly from what we might call ‘the magic of logic’. With this expression, I refer to the (trivial) fact that, in logic, the whole is more than the sum of its parts. Co-authors of a scientific paper contribute each with some premises to the argument the paper consists in, but what they collectively get in exchange is the ownership of the paper conclusion. In the toy example given above, being one of the discoverers of Q (the real ‘big’ discovery) is more valuable than either being the discoverer of P or being the discoverer of P→Q. But this may lead us to ask the following: if the ‘magic of logic’ is so powerful, why not to enlarge the set of conclusions our paper offers? If someone else shows that from Q other important things follow (say, S), why not to enrol her in our team and publish a paper that proves Q&S? And why the authors of the premises we used to establish P (say, N) do not insist on becoming also part of the team?

In all these cases, there is a tension between the importance of what can be proved, the size of the group involved, the time to wait till the discoveries are done, and the uncertainty of future discoveries. The first of these factors invites scientists to become co-authors, but the other factors make that decision costly and uncertain. Another important factor is that, usually, the results of the collaborating group are kept more or less secret till they are collectively published; if we have discovered Q and hope that this will help to make lots of new discoveries, we might try to ‘seize’ as bigger a fraction of the merit of those new discoveries, but simply not publishing Q, but letting the people that may use it enter our team. This would be a similar strategy to the one used by private firms in many industries, as we saw in our previous entry. Perhaps, fortunately, in the case of science is much more difficult than in industry to know in advance what the future discoveries will be and who has a real chance of making them. So, in the tension between becoming the member of a really big team that will make (with some probability) really big important discoveries, or just becoming the member of a smaller team (even perhaps a one-person team) that makes with more certainty a not so important discovery that can be published it in a much shorter time, it is reasonable that most scientists prefer the second strategy (see 1).

What do we think? Scientific knowledge after judgment aggregation