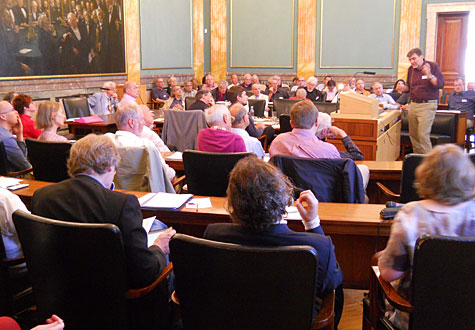 After centuries of debate, there is no agreement about whether ‘knowledge’ must be essentially conceived as a cognitive state of individual minds, or must be attributed to some collective entity, i.e., whether it’s me, or we, who ‘really’ knows. A promising analytical approach to this problem has emerged in recent years, which is concentrated in a more simple question: what formal connections exist between ‘knowledge’ as a social entity, and ‘knowledge’ as a property of those individuals conforming the social? Authors within this judgment aggregation approach have mainly employed social choice theory as a mathematical tool to analyse how individual judgments determine, according to well specified rules of aggregation, the claims endorsed by the collective, and also to what extent the rationality that individuals may display in their own epistemic states is transferred to the group’s opinions. The most consequential result that has emerged from this approach is the ‘doctrinal paradox’, or ‘discursive dilemma’, first described by Lewis Kornhauser and Lawrence Sager (1986) 1, and generalised in a number of ‘impossibility theorems’ by other authors, mainly Philip Pettit 2, Christian List, and Franz Dietrich. According to these results, when the members of a group disagree about certain statements, and they form a ‘collective opinion’ by means of some democratic aggregation procedure, it is possible for the group to reach conclusions that are mutually contradictory, even if each member has an internally coherent set of opinions.

Table 1 illustrates this possibility: the editorial board of a mathematical journal is formed by three members; they have to decide whether to accept a paper which contains the presumed proof of an important theorem, but they are discussing whether the proof is valid or not. This happens if and only if every premise of the theorem is true (A), and every deductive step is valid (B). Each member is willing to accept the paper if and only if A&B is true, but they have to answer the author with some reasons justifying the board’s decision. The problem they face is that, though a majority of the board accepts claim A, and a (different) majority accepts B, the majority still rejects A&B, and so, the message they are going to send to the author would be something like: “we don’t consider valid your proof, because we think that it is based on true premises, and all the logical step are valid.”

Independently of one’s position in the debate about the social nature of knowledge, this result constitutes a serious problem, both from a theoretical and from a pragmatic point of view, for there is no doubt that many instances of what we take as ‘knowledge’ in our complex modern societies –based on public deliberation and on the division of intellectual labour–, is the result of ‘aggregating’ thousands of epistemic inputs provided by separate but interrelated individuals. A particularly important case is that of scientific knowledge itself, which, according basically consists in some kind of negotiated consensus among the specialists, but a consensus that always conceals a number of more or less significant disagreements. It is surprising that the discursive dilemma has escaped the attention of relativistic philosophers, for it might apparently provide new arguments to show the lack of objectivity of accepted scientific claims; however, those tempted to follow this road should also be aware of some results about the probability of ‘good’ epistemic outputs arising from the aggregation of individual opinions.

One first interesting question would be: why do we worry at all about having something like a ‘collective opinion’, as something different from the mere enumeration of our individual judgments? In most cases this will be due not to some intrinsic interest of the group members, but to the demands of external people. For example, complaining customers don’t care about the particular opinions of the company’s workers or counsellors; citizens demand that a single and coherent law is passed by the Parliament; engineers want scientists to tell them the laws governing some physical system, and so on. Thus, many groups feel an external pressure to provide unified reasoned claims. Interestingly, Philip Pettit and his collaborators have been engaged in the literature on judgment aggregation surely in part because the ‘discursive dilemma’ constitutes a threat to the deliberative republicanism advocated by him (cf. Pettit (2001)). According to this view, a necessary condition for democracy is that political or administrative agencies are ‘rationally contestable’, i.e., it must be possible for other agents to engage in a reasoned deliberation with the former. Hence, it is not only that we often want that collective agencies ‘speak with a single voice’, but also that the claims endorsed by this ‘voice’ are logically articulated, so that rational discussion is possible.

But there is still a very important aspect of the process of judgment aggregation that needs to be taken into account, and that is usually neglected in the literature: a reasonable assumption to make is that the aggregation process takes place only after every individual has taken into account the judgments of the others; i.e., we can assume that a previous process of public deliberation has taken place, during which each agent presents her reasons in favour or against each debated statement, and perhaps revise her own judgment accordingly. Public aggregation, instead, starts when deliberation has finished, i.e., when no one of the reasons publicly discussed makes anybody else change her opinion, or, stated differently, when an equilibrium is attained in the deliberation process. This apparently innocent assumption, together with the hypotheses that the agents are rational, has a dramatic consequence for the philosophical discussion on judgment aggregation: there is no reason to suppose that the collectively adopted judgment is ‘epistemically superior’ in any sense to the individual judgements.

This means that a judgment aggregation problem is not equivalent to an analogous problem of aggregation of information. In the latter case, we can take the opinion of every individual as a kind of statistical estimator of the truth of the relevant propositions, and, by knowing each individual’s reliability, it would be possible to make an inference to the theory that is most likely true. But we are assuming that, were there some compelling, public argument showing that the collective judgment is more likely true than the opinion of an individual, then this individual would have a reason to change her mind, but we have supposed that every rational change of individual opinions has already been made. Hence, the collective judgment should not force any member of the group to change her individual opinion in any way. From an epistemic point of view, this means that we should not think of the collective judgement as a ‘better’ opinion than the individual ones. The problem of judgment aggregation, then, is not that of ‘finding the truth amongst a bundle of contradictory opinions’, but rather, that of how to live and act in a group in which there are irreducible cognitive disagreements. It is important not to forget that this is primarily a problem for the members of the group, and not for the philosopher observing them from the outside. This is the main justification of the contractarian approach I have defended elsewhere (Zamora Bonilla, 2007 3): judgment aggregation mechanisms need not be justified by means of philosophical or mathematical arguments (though some of these can obviously be relevant), but mainly by means of the practical advantages or disadvantages that having one mechanism or another will have for the people whose judgments are going to be aggregated.

The value of knowledge