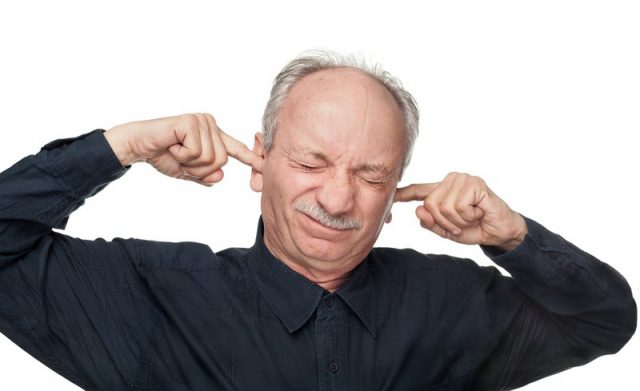 Each of the Voyager probes, two unmanned spacecrafts launched in 1977, has a gold-plated audio-visual disc, a recording that aims to introduce us to a possible alien and to show the diversity of living beings and cultures that planet Earth has. Carl Sagan said that «The spacecraft will be encountered and the record played only if there are advanced space-faring civilizations in interstellar space, but the launching of this ‘bottle’ into the cosmic ‘ocean’ says something very hopeful about life on this planet».

A committee chaired by Sagan selected the contents of the record for NASA. Sagan and his team assembled 115 images and a variety of sounds, such as those made by surf, wind, thunder, birds, whales and humans (footsteps, laughter and greetings in 55 different languages) and what was considered a universal communication system: music. The Voyager Golden Record includes Bach interpreted by Glenn Gould, Mozart, Beethoven, Stravinsky, Azerbaijani folk music, Blind Willie Johnson, a mariachi and Chuck Berry, among others.

Music is not only a universal language; it is also considered one of the most pleasurable types of stimuli that human beings experience. The existence of music is documented from prehistoric times and appears in all cultures of all continents. And yet, there is recent evidence that indicates this enjoyment is not so universal and that there are some people who do not like music, do not have a favourite singer or when they listen to a station they never choose one that is playing music. In fact, recent research has called this psychological condition in which no pleasure is felt with any melody as musical anhedonia. For these people, music is something that is halfway between boredom and a distraction, and they do not feel a positive feeling when they hear any music.

One of the people who has worked on this subject is a Spanish professor, Josep Marco-Pallarés, of the University of Barcelona. For him, the identification of these people can be important to understand the neuronal basis of music and to understand how a group of notes is translated into emotions in our brain.

Previous studies had shown that most people have a genetic predisposition to respond to music, and that popular songs or symphonies usually generate an emotional response. The effects of music on our behaviour seem to be mediated by the release of endorphins in the brain. These molecules are peptides produced by the nervous system itself, with a structural resemblance to opiates. Endogenous opiates inhibit the sensation of pain and generate a feeling of euphoria, well-being, and pleasure as do the exogenous opioids such as heroin or morphine. In fact, naltrexone, a µ-opioid antagonist, a medication primarily used to manage alcohol or opioid dependence, induces reversible musical anhedonía, attenuating both positive and negative emotions. Endogenous opioids are critical to experiencing both positive and negative emotions in music. In addition, music uses the same reward pathways as food, drugs and sex.

The Barcelona researchers used a questionnaire to see how different people lived music1. What they saw is that a group, both men and women, commented that they did not like music as much as other types of stimuli or experiences. At first, the researchers thought that these people might have a disorder called amusia, which is the inability to process the pitch, but then discovered that it was more complex. To investigate, the researchers selected 30 volunteers in three groups: ten who said they felt great pleasure in listening to music, ten who said it was a positive but not intense sensation, a moderate pleasure that fit into a standard assessment of music, and a third group of people who said that music was not particularly pleasant for them.

In a first part of the experiment, the volunteers had to listen to music and appreciate the pleasure they were experiencing. The music was thirteen pieces selected by the researchers and another three that each chose on his own, his favourite works. In another task, they had to answer quickly in a test, if they did well they avoided losing real money. In previous studies, it has been seen that these two tasks stimulate the release of dopamine and are part of the reward circuits. During the tasks, the researchers recorded some physiological responses of the participants, such as heartbeat and sweating.

What the Marco-Pallarés group found is that people who had marked that they did not especially like music did not show a physiological response to what they heard, that is, there were no changes in heart rate or sweating. However, those who had commented that they felt pleasure listening to music did have an answer in those measurements of the autonomic nervous system. However, when the answers to an economic reward were checked, there were no differences, that is, the three groups presented similar reaction times and physiological responses, increased heart rate and an increase in sweat production. They also saw that people for whom music was something indifferent did respond to other forms of reward, not only money but also food, sex or caresses. 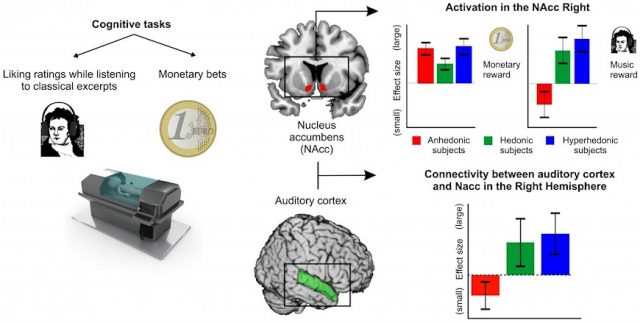 In a second study 2, the research group from Barcelona studied possible correlations between musical anhedonía and brain connectivity. They employed fMRI in three groups of 15 participants, each with the different sensitivity to music reward used in the previous study. In comparison with the rest of the population, people with musical anhedonia showed a selective reduction of activity for music in the nucleus accumbens, but normal activation levels for a monetary gambling task. In addition, this same group also exhibited lower functional connectivity between the right auditory cortex and ventral striatum, including the nucleus accumbens. On the contrary, those who enjoy listening to music have a greater number of connections between these two brain areas. The conclusion is that musical anhedonia may be linked with a decrease in the interplay between the auditory cortex and the reward system, suggesting a pivotal role of this interaction for the enjoyment of music. In fact, a 63-year-old, right-handed professional chorus conductor developed musical anhedonía after right putaminal haemorrhage. He became unable to experience emotion while listening to music. Brain MRI and tractography identified the old hemorrhagic lesion in the right putamen and impaired fibre connectivity between the right insula and superior temporal lobe. These findings suggest that musical anhedonia might be caused by a disconnection between the insula and auditory cortex 3.

The idea is that the reward system is specific, people who do not show an answer to the music, they respond to another type of stimuli such as a monetary reward. Therefore people with musical anhedonia do not experience a general inactivation of this system of positive reinforcement but each person varies in the stimuli that generate a response. This suggests that there are different ways of accessing the reward system and it seems that we each have stimuli to which we respond and others to a lesser extent, although it seems that we all respond to money! Understanding the reward system is important because it is at the base of some disorders and behaviour problems such as mood disorders or addictions. Musical anhedonía is not infrequent. In the Marco-Pallarés sample, people with musical anhedonia were 5.5% of the total. Current estimates are that this condition would affect between 3 and 5% of the population.

Music, maths, language… and the brain

Exploring the brain of jazz musicians