Author: Adrián Matencio is pursuing a PhD at the Department of Biochemistry and Molecular Biology – A, Faculty of Biology, University of Murcia, where he graduated in biotechnology. 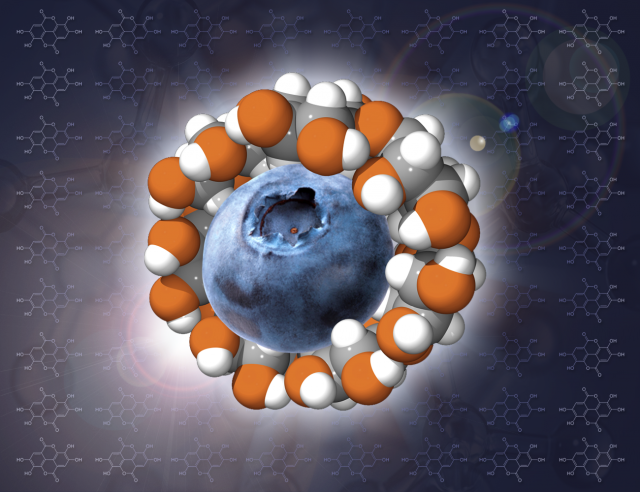 It is time to round off this trilogy of articles 12 about the importance of basic science nowadays. But first, how does science improve? A research team selects a topic, creates its hypothesis and workflow and, perhaps, tries to publish an article with the findings. This article is read by a new research team, who will create a new hypothesis based on the research already carried out, and so on.

The system works well; a pyramid shaped system where a new article is supported by many previous articles. However, some of these articles were written years ago and techniques have improved so that the topic in question may need to be revisited. Can we discover anything new by doing this? Sometimes yes. Here is an example found by our department 3: We were trying to create a new nanosensor for ellagic acid (Fig. 1) a symmetric natural phenol bioactive compound present in pomegranates, grapes, strawberries, blueberries and raspberries.

Ellagic Acid has recently been studied for its bioactive characteristics, which make it a good antioxidant, anti-inflammatory, anticancer, anti-lipoxidation and anti-microbial agent. This profile of course, has caught the food industry’s attention, and ours. “At present, methods to analyze EA focus on chromatographic solutions, but surely other easier and cheaper methods would be welcome”, we thought.

For that reason, our first step was to check the bibliography related with this compound and its chemical qualities. And we found that the compound was fluorescent 4 but only in the presence of borax (also known as sodium borate, sodium tetraborate, or disodium tetraborate, an important boron compound, a mineral, and a salt of boric acid). In accordance with the bibliography, a complex 1:1 EA-borax (one EA per borax) was found. This particularity could be regarded as a good starting point because i) The fluorescence of molecules is a highly sensitive signal, ii) the fluorescent signal is quite selective and, furthermore iii), some fluorescent compounds are complexated with cyclodextrin (CD, torus-shaped oligosaccharides made up of α-[1,4] linked glucose units ) which increasing their fluorescence signal 5. So, why not try to create a novel nanosensor based on its fluorescence interaction between borax, EA and CDs?

Bearing the above in mind, we attempted to obtain a saturating concentration of borax, enabling the technician to work without having to deal with strong changes in the signal (Fig. 2).

A concentration of 15 mM of borax was found as stable but, spectrofluorimeters have improved with the years and, surprisingly, our data showed a sigmoid behavior below 1 mM of borax. This behavior is not typical in a 1:1 fluorescence complex. We repeated the experiment and the results was again, a sigmoid. At this point, we started to think that the complex may not be 1:1, but 1:2 (two borax per EA). Moreover, the molecule is symmetric so both sides presumably have the same chance of attaching to a molecule of borax To clarify this hypothesis, an experiment was carried out with borax concentration of less than 1 mM and novel mathematical models were created: these, in effect, pointed to a 1:2 interaction between EA and borax in contrast to what the bibliography claimed.

Finally, based on our new nanosensor, we studied the possibility of using it with blueberries (Fig. 4). A simple analysis showed i) no interference with other compounds and ii) that it provided an 18 times more potent signal than the pure extract alone, and 7 times more powerful than with borax alone in the conditions reported.

To sum up this trilogy, we have seen how basic science is important to get more and better science. To illustratethis assertion, we found that the basic knowledge of EA needed a revision. Such basic knowledge sometimes is called “undisputed truth” and researchers must be careful, because it frequently goes unchecked. The new study we made may lead to fresh applications of EA-borax interactions.

When we forget basic science. An example concerning solubility

When we forget basic science. A jar is not a jug

The Enlightenment wars (2): the details