Author: José H. García is a postdoctoral researcher at the Catalan Institute of Nanoscience and Nanotechnology (ICN2). 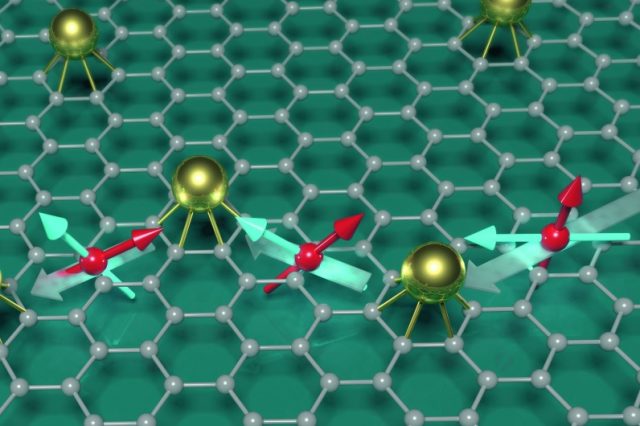 Few materials have drawn as much attention as graphene, it fascinating attributes such as one-atom thickness and relativistic electrons, and its technological properties like transparency, large mechanical strength, and ultra-high electron’s mobility, position it as one of the more promising materials in the present. Recently, simultaneous experimental and theoretical studies have confirmed that combining graphene with a family of material known as transition metal dichalcogenides could enable the uses of graphene in the rising field of spintronics.

The spintronics is a branch of electronics that aims to use an intrinsically quantum property of the electrons known as spin, as the replacement of charge in low-power and faster digital devices. Among the many proposals for controlling the spin, the use of a relativistic effect known as the spin-orbit coupling is probably one of the most interesting, because it allows to electrically manipulating the spin by coupling it with its momentum, which can be controlled by the application of a voltage.

To the date, graphene’s low spin-orbit coupling positions it as the ideal spin wire, because electrons can rapidly propagate through it without altering its spin state. However, having a graphene-only spintronic device would enable to simplify the manufacturing process, while importing graphene’s exceptional properties. Different experiments performed in 2016 showed through indirect measurements that combining graphene with transition metal dichalcogenides could enhance its spin-orbit interaction by proximity-hybridization, which is a purely quantum process where the wave function of each material interacts between themselves making both materials to absorb part of each other properties. That same year, Prof. Luis Hueso’s group at CIC nanoGUNE performed the first experiment where the individual properties of each material where used for spin manipulation, by using an electric gate for tuning the spins flow between graphene and the TMDC they constructed a spin switch, a device which allows for turning on and off the spin current.

Last year, a conjoint effort between Prof. Stephan Roche and Prof. Sergio Valenzuela groups, both at the Catalan Institute of Nanoscience and Nanotechnology (ICN2), showed the first direct evidence of spin manipulation in graphene due to proximity induced spin-orbit coupling. Roche’s group predicted that due to the special characteristics of the proximity-induced spin-orbit coupling in these heterostructures, the electrons will relax faster when their spin lies on the graphene plane than when they are out of the plane, a phenomenon known as spin-lifetime anisotropy 1. Measuring this will be then, a clear signature of the spin-orbit in the system. Later that year, Valenzuela’s group performed the first experimental confirmation of the effect at room temperature, a result that has led to a lot of research focused on these materials2. In Figure 1 we show a schematic of the lateral device used in the experiment, and a cartoon of the spin-lifetime anisotropy.

Why is this spin-orbit special?

The special thing about graphene/TMDs heterostructures is that, due to its structural properties, they also possess an additional degree of freedom beyond the spin known as the valley, and both are coupled by the spin-orbit interaction. In addition, when a metal is subjected to an external electric field, the electrons within it will move in the direction of the electric force, and their dynamics can be described by their dispersion relation, which is dependence between their energy and momentum p =ℏk. Due to the spin-orbit coupling, a change of momentum will also produce a variation of the electron’s spins which for these systems will also depend on the valley dynamics.

In Fig. 2 we show the band structure and spin textures for a single valley in two particular situations: Graphene on traditional substrates and graphene on WS2. For traditional substrates, possessing the typical Rashba spin-orbit coupling, the spin dynamics is the same in both valleys and therefore intervalley processes are not important. For the case of graphene/TMDs, the spin-valley coupling will impose the constraint that the spin texture has to have the opposite out-of-dynamics when changing valleys, as shown on the inset of the figure. In fact, the arrows in this inset denote the direction of the spin-orbit field for a particular energy, which defines a preferred direction for the spins. Therefore, a change of valley will invert the preferential out-of-plane direction leading to a change in the spin dynamics. This process generally occurs through intervalley scattering induced by disorder in the sample which, being stochastic; randomize the out-of-plane spin-orbit coupling field, which ultimately increases the in-plane relaxation time. This process is the source of the peculiar relaxation anisotropy.

The TMDs, possessing a strong spin-valley coupling, is the source of this behavior, and imprint it in the high-mobility graphene via a proximity-induced spin-orbit coupling, enabling it with a larger capacity for information encoding. These kinds of symbiotic relations are currently raising the hype of Van der Waals heterostructures as a groundbreaking platform for future spintronics devices.

The broad number of experiments performed during these last two years where recently compiled into a comprehensive reviews written by Prof. Roche’s group, where all the experimental results where unified within a single theoretical framework, and new experiments for measuring additional spin-phenomena where also presented 3. We hope that this work can help to pave the way for unlocking graphene’s spintronics potential in the following years.

Towards a bottom-up engineering of molecular spintronic devices