It is generally considered that equality of opportunities means equal access to education and health. When the society considers that some goods like school and vaccines must be consumed by everyone, economists define them as “merit goods”, which deserve a special treatment, as in the case of public goods or goods that cause consumption externalities. In the early 1980s, the American environmental justice movement was created to demand the fair distribution of environmental benefits and burdens, which would imply adding one more item to the list of merit goods.

In a recent article, Banzhaf et al. (2019) 1 review the literature concerning the discriminatory aspects of pollution management, exposing the difficulty of the analysis, the mechanisms that cause the discrimination and offering some hints about how to deal with the problem. As the authors acknowledge, the relative importance of the different mechanisms has not yet fully studied and, thus, more research is needed to offer better policy recommendations. Here we summarize the article. 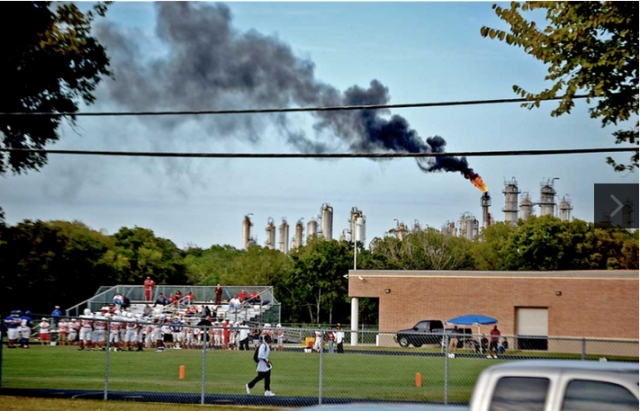 The first task is to study how different segments of the population are exposed differently to hazardous waste sites, landfills, air polluters, and the like. The problems start when one sees that not all waste sites handle an equal amount of waste and that pollutants vary in their toxicity. When these factors are taken into consideration, the overall finding that low-income households and people of color have greater exposure to environmental hazards is well supported empirically. Moreover, the pattern seems to be persistent and largely unchanged in the 1987-2007 period.

The next question is to analyze the causes of this unequal exposure. In general, the literature has found that once socioeconomic controls are included, race no longer seems to play a role. For instance, the fact that the intensity of manufacturing employment is one of the best predictors of higher exposure to pollutants, combined with the fact that black people are disproportionally employed in this sector, has as a consequence that the black population suffers also a more than average exposure. This is important to make a correct diagnosis of the inequality (labor conditions rather than race, e.g.), but does not eliminate the fact that the environmental inequality exists.

Establishing the appropriate controls in the econometric analysis is not the only problem to solve in the analysis. The special relationship poses an important issue. A typical regression analysis assumes that that the population “exposed” to a nuisance coincides with those people living in the same geographic unit as the nuisance, such as a census tract or zip code. This approach is straightforward, but is problematic. Counties and census tracts vary greatly in size. For instance, census tracts are smaller in more dense areas and thus assign smaller exposure in more urban areas. Also, exposure to nuisances located near geographical boundaries, but on the other side of the tract, are not considered. Finally, different communities within the same county may be affected very differently by a nuisance. In this context, Mohai and Saha (2006) 2 and Ringquist (2005) 3 find that race is more likely to remain correlated with pollution when using distance-based measures rather than unit-hazard coincidence even after using socioeconomic controls.

Another important issue concerning the special relationships has to do with the size of the units of analysis. Say we have an area that can be divided in four subareas A, B, C and D. If pollution sources are located in subareas A and C, and if people of color are a majority in those areas, the analysis at the area level will underestimate the impact of pollution on them. In fact, Baden et al (2007) 4 find that evidence of racial, ethnic, and income inequities becomes stronger when using smaller units of analysis.

The effect of a disproportionate exposure to pollutants has important consequences for inequitable health and educational outcomes, the two most important merit goods to assure equal opportunities, and perpetuates poverty traps.

Many of the studies documenting correlations among race, income, and pollution are unable to distinguish among alternative causal stories. Yet understanding the causal channels is important for two reasons. First, it helps to narrow down the locus of injustice. Second, understanding causal channels is crucial for designing policies meant to reverse the observed correlations. The authors highlight four such mechanisms.

Firms might site their polluting activity based on local economic conditions, which in turn are correlated in space with residential demographic patterns. Alternatively, government agencies make decisions (e.g., during the permitting process) that affect the location in a discriminatory way.

Coming to the Nuisance

Pollution may signal neglect and start a movement of environmental gentrification, by which the poor and the people of color may find themselves in the middle of a segregation dynamics near the nuisance because they cannot afford the higher prices of the cleaner tracts. For example, people of color who want a clean environment not only have to pay in the form of higher housing costs, but also to live in a majority-white community, for which they might perceive little benefit (Banzhaf and Walsh 2013 5; Ford 1994 6). Some perverse results could also arise, like that cleaning up pollution in a poor neighborhood may harm the poor, as rental prices increase by more than they can pay.

Oftentimes, pollutants and communities bargain over conditions and compensations for local pollution. But communities may differ in their ability to claim the right to ask for limitations or compensations, or to overcome the coordination problems within the community to make their claim effective. For instance, The Cerrell Report (Cerrell Associates 1984 [6]), a consulting report requested by the state of California Waste Management Board, provides an infamous example of an effort to direct the siting of polluting facilities towards communities that would be ineffective bargainers. The report identified characteristics of local communities that would not protest the location of waste sites in their area—in particular, people without a college education, the poor, Catholics, and those “not involved in voluntary associations.”

In the same way that poor communities may not be able to negotiate with firms in an effective way, they may also not be able to influence local regulations by politicians and government agencies. In an early study, Lavelle and Coyle (1992) 7 concluded that polluters accused of violating environmental regulations faced lower enforcement penalties if they were in areas with more people of color. They also found that, in such areas, cleanup times were longer and cleanup solutions were less stringent. Viscusi and Hamilton (1999) 8 re-examined remediation activities, focusing on the choice of post-cleanup standards. They found, perhaps surprisingly, that regulators impose stricter risk targets in the areas with populations with the less (seemingly anticipating a need for protection) and the greater potential for collective action.

The authors also review the technical difficulties to make the correct diagnosis about the importance of the different mechanisms, and call for more effort in this direction. For example, imagine that pollution is cleaned up in a predominantly poor community, triggering in-migration. If the in-migrants are the poorest members of the comparison community, then both communities can become richer on average, making the prediction for differences-in-differences ambiguous, except for large changes (Banzhaf and Walsh 2008) 9.