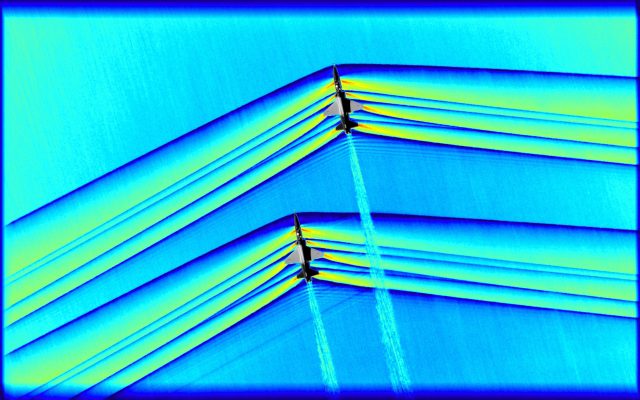 Merging shock waves created by the supersonic speeds of two Air Force jets can be seen for the first time in photos taken by NASA. A plane flying over the two T-38 planes snapped the photos using air-to-air schlieren photographic technology.

A study of 69 skin lesions from 47 patients in Canada found that a low-cost optical laser probe can help detect skin cancer. Distinctive scattering occurs in light waves as the laser passes through cancer cells, and the researchers have devised a method to enable instant interpretation of the patterns.

Scientists are searching for alternatives to the forage fish meal the aquaculture industry uses to feed stock as rising global consumption of farmed fish places growing demands on the nutrition source. Some of the alternatives being studied are algae, special yeast, bacteria and crickets.

A 6-year-old Oregon boy who cut his forehead contracted the first reported pediatric case of tetanus in the state in more than 30 years, according to a CDC report. The report says the boy had not been vaccinated for tetanus or received any other vaccinations recommended for his age group.

Information lost in quantum scrambling may just be hidden

Information that appears lost due to quantum scrambling may actually be hidden and could be recovered by looking at correlations between particles. Researchers have devised a system that may be able to discern whether information is truly lost or whether it’s just been scrambled, which could be a first step in recovering the information.