This growth has been fueled mainly by the possibility of tuning a set of remarkable electronic properties using an array of methods (thickness control, doping, intercalation, proximity effects, to name a few) coupled with a relative simplicity of fabrication. These two characteristics are what make the layered van der Waals materials attractive from both practical and fundamental points of view.

However, the important step towards magnetic functionalization of the inherently nonmagnetic layered van der Waals materials and a controllable fabrication of the resulting hybrid systems has proven challenging. As a matter of fact, the field of two-dimensional van der Waals magnets is in its infancy and many more materials with new properties are to be explored. In particular, van der Waals antiferromagnets are expected to be of great interest. Antiferromagnetism occurs below a certain temperature, named after Louis Néel, when an ordered array of atomic magnetic moments spontaneously forms in which alternate moments have opposite directions. There is therefore no net resultant magnetic moment in the absence of an applied field. 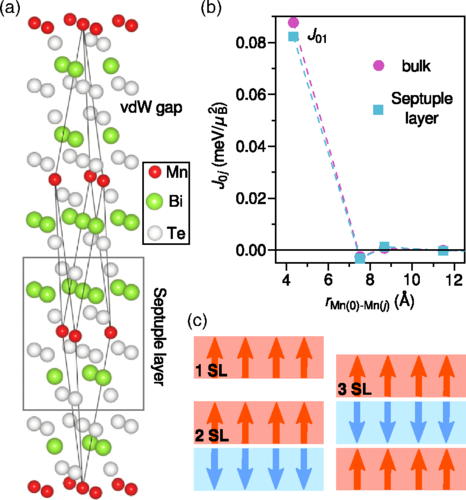 Recently it has been reported that the layered van der Waals compound MnBi2Te4 is the first ever antiferromagnetic topological insulator. This combination is predicted to give rise to exotic phenomena with exotic names, like quantized magneto-electric effect, axion electrodynamics or Majorana hinge-modes. This compound is a candidate to couple the emerging fields of antiferromagnetic spintronics and layered van der Waals materials

Now, an international team of researchers, with the participation of UPV/EHU, CFM and DIPC, has studied 1 the magnetic, electronic and topological properties of MnBi2Te4 in the two-dimensional limit.

Although the synthesized single crystals of MnBi2Te4 show some degree of statistical Mn/Bi disorder, calculations indicate that such an intermixing is less favorable than the ideal structure . Therefore, the researchers have used state-of-the-art ab initio techniques and the Monte Carlo method to explore the properties of the ideal structure.

Itinerant ferromagnetism at the surface of an antiferromagnet

Detection of the reversal of magnetic moments in an antiferromagnet