Author: Ivan Coluzza is an Ikerbasque Research Professor at CICbiomaGUNE

On our unique planet, life evolved under the pressure of natural selection. The evolution theory of Darwin demonstrates the incredible plasticity of the living organism. For millions of years, living organisms explored the conformational universe of proteins introducing new structures and function through genetic mutations. The genetic modifications are translated into the sequence of amino-acids specific of each protein. The modular system based on amino acids is hence incredibly versatile and is also obviously highly sustainable. In particular, since all living organisms share the same set of amino acids all protein-based materials are extremely recyclable.

Imitating such a self-assembling system is one of the most promising fields to build new smart materials, with applications ranging from energetics to catalysis and biomimetic scaffolding. Critical for the successful realisation of biomimetic material is the unravelling the process necessary to identify a sequence that drives the polymer to fold into a chosen target structure. The biomimetic polymer composed of chains of heterogeneous monomers is called heteropolymers. The technology for the synthesis and manipulation of synthetic heteropolymers is already advanced, and it is nowadays possible to synthesise polymers made of up to 7 different monomers with complex pattern arrangements (e.g. block copolymers). In previous publications, we have demonstrated that it is possible to design heteropolymer precisely to fold into target structures. The essential elements to allows the beginning of a new era of experimental polymer design are the identification of optimal building blocks and the minimum number of such building blocks to achieve the design. 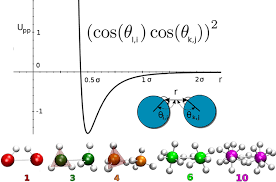 We use our results to identify optimal chemical monomers for the synthesis of designable heteropolymers. We classified conventional synthetic polymers according to the number of potential backbone hydrogen bond per monomer. Such results provide a guideline for future experiments as they indicate explicitly which chemical species can be used to construct designable backbones. In particular, we identified polyurea, polyamide and polyurethane residues as optimal candidates.

From protein design to materials design