Organic-based materials have gained rising interest as active components in electronics, energy conversion and catalytic systems. However, the discrete nature of the molecular constituents of these systems implies a reduced electron conductance, lowering the device efficiency.

In order to increase the electron delocalization through an improved structural order, which favors orbital overlap and consequently the intramolecular charge transport, the use of halogen atoms is one of the possible strategies. Actually, doping and molecular functionalization with halogen atoms have demonstrated to improve the molecular crystallinity through high-directional bonds. At the same time, halogens modulate the electrical properties, the potential barrier and energy levels.

The problem with the halogen strategy is that the resulting higher conductivity of these materials degrades quickly due to the low chemical stability of the compunds, especially those including iodine or bromine.

This same chemical instability of the functionalized molecules, which can easily undergo redox-reaction detaching the halogen, has instead been recently exploited to synthetize polymers through cross-coupling reactions allowing the formation of shape-controlled and surface-supported polymers. Electron delocalization, in this case, occurs through the backbone of -conjugated molecular units covalently bonded in extended polymers. Paradoxically, these recent experiments generally neglect the possible contribution to the charge conductance of halogens, by-products of the reaction, and rather promote their desorption by annealing or by exposure to hydrogen.

Now, the fundamental contribution to charge-conductance of bromine atoms, spontaneously detached during molecular assembly on Cu(110) surface, has been reported 1. 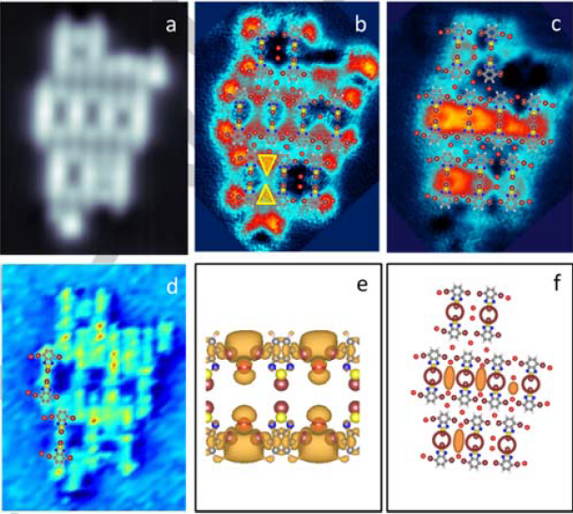 The researchers characterize the assembly of the 4,7-dibromobenzo[c]-1,2,5-thiadiazole (2Br-BTD) molecules and of their reaction byproducts on Cu(110). BTD molecules are a prototypical compound widely used in electronics and photovoltaics due to the electronic structure and the capability to form donor-acceptor units. The assembly of these molecules on the Cu surface leads to the spontaneous redox-reaction of the two Br terminations, which detach, transmetalating the molecules with Cu adatoms, according to the Ullmann redox-reaction on copper surfaces.

By means of scanning tunneling microscopy and density functional theory (DFT) calculations, the team of researchers has observed in differential conductance maps and characterized the formation of 1D-structures – that the researchers call channels – which interconnect molecular states through the pores of the metal-organic network.

To explain the origin of these electronic structures, the team proposes a mechanism that enables the delocalization of a well-defined molecular resonant state into the continuous channels observed. Br atoms, as mentioned by-products of the 2Br-BTD molecules redox-reacted on Cu(110), determine the formation and continuity of the channel by displacing into neighboring adsorption positions within the network. This shift of one lattice constant changes the Br bonding configuration which, in its turn, modifies the local potential landscape, the energy level alignment and, thereby, the length of the channel.

Even if not directly involved in the conductance, the exact location of bromine atoms turns to be so critical that the shift of one lattice-constant in their adsorption position creates a structural order-disorder transition, which induces a misalignment of the energy levels and affects the continuity of the channel. In other words, although these Br byproducts do not contribute directly to the conductance, they critically control it.

These results stress the critical role that single atoms can play on the electronic properties of a metal organic network. Such structural properties have been suggested to strongly affect the electron transport in organics and are considered among the principal factors limiting carrier’s mobility.