We all know some of the symptoms of sleep deprivation: bad mood, tiredness…but when bad comes to worst, this lack of sleep can even lead to death. A recently published article 1 by neuroscientists at Harvard Medicine School have shown, in flies, that lack of sleep might be killing from the gut.

Because flies share many genes with humans, including those for gene regulation, they were the chosen ones to live, and die, without sleep. To keep them from sleeping they mutated the flies with a heat-sensitive protein in neurons whose activity is known to suppress sleep. When the flies were kept at 29ºC, this protein activated the neurons constantly, and the flies could not sleep. 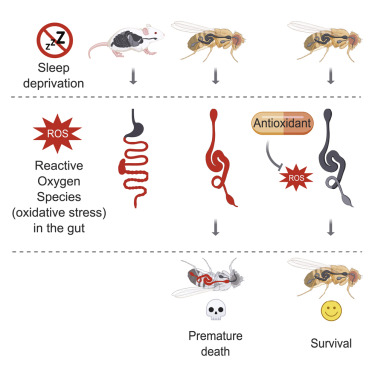 After 10 days of sleep deprivation, flies started dying like…well, like flies so that 20 days after the initial sleepless night all flies were dead. On the contrary, flies allowed sleeping normally lived up to 40 days.

The researchers looked throughout the flies’ bodies to look for problems in the days previous to day 10 of sleep deprivation, finding no differences among sleep-deprived and rested flies except for their guts.

In the guts, they found high amounts of reactive oxygen species (ROS), which can damage DNA and eventually lead to cell death. Interestingly, feeding the flies with antioxidants, which avoid ROS accumulation, like melatonin or lipoic acid led to ROS clearance from the guts of sleep-deprived flies and to life extension. The same happened when antiROS production was mediated via a mutation that led to flied producing antioxidants in their guts.

Now, you may think flies are far but human, but the researchers did reproduce the same results in mice. And they, at least, are mammals and also closer, so it might be that this is an evolutionarily conserved mechanism.

Many questions remain however: what is the link from the brain towards the gut, how does the damage to the gut come about and which therapies would be the most efficient to deal with chronic sleep deprivation?

If you suffer from lack of sleep, like most people nowadays, you will surely stay tuned for what’s to come in this respect. Now, off to bed!!

Zebrafish point to an ancient origin of sleep

Brain tumours and the lack of molecular editing

Why (some) sleepy brains get grumpy