An exciton can be described as an electron-hole pair in a crystal that is bound in a manner analogous to the electron and proton in a hydrogen atom. The exciton behaves like an atomic excitation that passes from one atom to another. In most cases, excitons are induced by an electromagnetic wave, a photon. Interestingly, in some cases the frequencies of vibration of an incoming electromagnetic wave and the resulting exciton are very similar, and they resonate. When they have a strong resonance interaction with each other, a quasi-particle results from the admixture of states of the photon and the exciton, that is a polariton. In other words, polaritons refer to quasiparticles formed by light strongly coupled to collective excitations in matter.

The hybrid light−matter nature of polaritons offers a promising platform for the manipulation of the flow of light at the nanoscale. Notably, phonon polaritons – the result from coupling of an infrared photon with an optic phonon – in layered van der Waals materials – those that consist of two-dimensional layers bound by weak van der Waals forces – such as hBN, α-MoO3, or α-V2O5 have recently attracted great interest since, apart from featuring field confinement to the nanoscale, they naturally exhibit anisotropic (and particularly directional) propagation, ultralong lifetimes, and low group velocities.

Many applications can be found for these features that would be key to terahertz (THz) nanophotonics. THz electromagnetic radiation is key to access collective excitations such as magnons (spins), plasmons (electrons), or phonons (atomic vibrations), thus bridging topics between optics and solid-state physics. The confinement of THz light to the nanometer length scale is desirable for local probing of such excitations in low-dimensional systems. These applications include, but are not limited to, nanolasers, polarization-sensitive detectors, molecular sensors, hyper-lensing, or waveguiding.

However, a significant obstacle to such applications is presented by the phonon polaritons exclusively residing in the polar material’s reststrahlen bands. The reststrahlen effect is a reflectance phenomenon in which electromagnetic radiation within a narrow energy band cannot propagate within a given medium due to a change in refractive index concurrent with the specific absorbance band of the medium in question; this narrow energy band is the reststrahlen band. As a result of this inability to propagate, normally incident reststrahlen band radiation experiences strong-reflection or total-reflection from that medium. In this case, these spectral regions are typically located in the mid-infrared to THz part of the electromagnetic spectrum. Thus, routes for spectral tunability as well as materials with reststrahlen bands covering complementary spectral bands are badly needed. 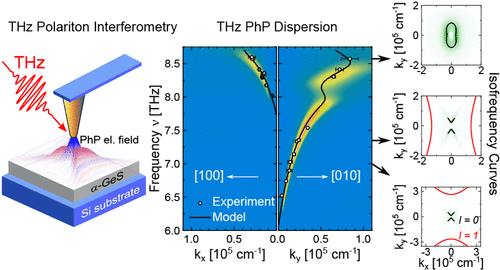 In this vein, a promising material class to observe phonon polaritons is that of highly anisotropic van der Waals materials. Now, a team of researchers has focused 1 on the recently predicted THz phonon polaritons in the semiconductor compound alpha-germanium(II) sulfide (α-GeS) that exhibit an intriguing polariton dispersion in the frequency range ν = 6.0−9.5 THz. The researchers used THz nanospectroscopy, supported by theoretical analysis, to provide a thorough characterization of the different in-plane phonon polariton modes in GeS.

They found not only phonon polaritons with long lifetimes and excellent THz light confinement but also an intrinsic, phonon-induced anomalous dispersion as well as signatures of naturally occurring, substrate-mediated phonon polariton canalization within a single GeS slab. These features make GeS a good candidate to become a feasible, versatile platform for THz light confinement and manipulation.

Disclaimer: Parts of this article may have been copied verbatim or almost verbatim from the referenced research papers