Since the discovery of graphene, a wide diversity of atomic-layer-thick, two-dimensional (2D) materials with varied properties have emerged. Of particular interest are those that exhibit semiconducting behaviour, such as hexagonal boron nitride (hBN). hBN is isoelectronic to graphene and has also a honeycomb lattice formed by alternating nitrogen and boron atoms, but in contrast to the semimetallic graphene, its band structure presents some characteristics that makes it particularly attractive for applications in microelectronics, either alone or in combination with other 2D materials, such as graphene. In top of that hBN is structurally robust and chemically inert.

Although hBN flakes may be obtained by mechanical exfoliation of bulk crystals, a single hBN monolayer can be readily synthesized on metal surfaces, leading to structurally and chemically robust substrates that frequently exhibit nanoscale patterns. This makes hBN-covered metals excellent platforms to achieve functional interfaces with atoms, molecules, and aggregates,as well as to develop hybrid 2D materials, such as twisted van der Waals stacks or 2D heterostructures. The latter hold a great potential for atomically thin circuitry, such as superstructures formed with isostructural graphene, which are optimal to engineer gaps and doping, as well as to tune and enhance spin scattering.

However, this easier said than done as exploiting fine hBN-based nanostructures requires structural quality down to the atomic scale and precise lateral nano-structuration and integration with other two-dimensional materials, which lies beyond current lithographic capabilities. The bottom-up vapour growth is the alternative, which also works for 2D hybrids, although general procedures to control shape, size, and spatial order of surface phases are still lacking.

Now, a team of researchers has found 1 a working disruptive approach: imprinting the lateral pattern of an atomically stepped one-dimensional template into a hBN monolayer. 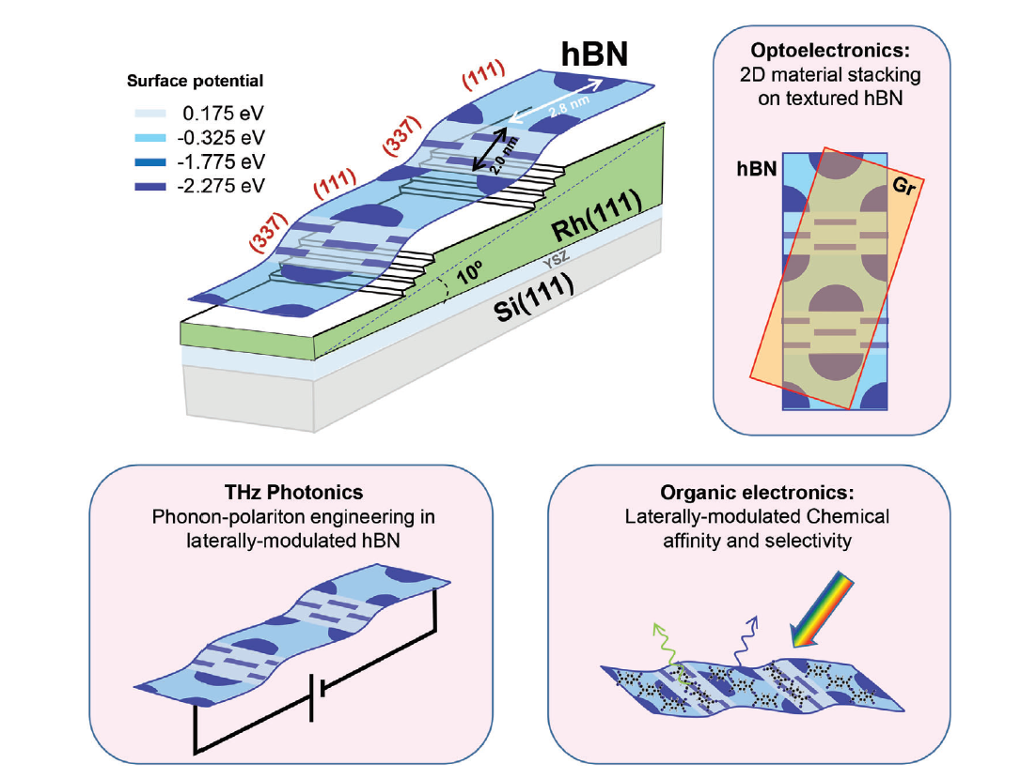 Since size tunability of phases can be gained by selecting the Rh vicinal plane, a variety of new possibilities are opened by this discovery. For example, the hBN (111)/(337) faceted system could be used as a model platform to mould and probe 1D phonon–polariton excitations in the THz regime, to achieve selective growth of atoms, aggregates, and molecular adsorbates for organic optoelectronics and catalysis, or to tailor the 3D stacking with other 2D materials, such as graphene.