Isolated atomic planes, two-dimensional (2D) materials, like graphene can be reassembled into designer heterostructures made layer by layer in a precisely chosen sequence. Such heterostructures are often referred to as ‘van der Waals’ and the simpler one is composed of just two layers (bilayer). In 2018, Pablo Jarillo-Herrero, an experimentalist at MIT, found that at 1.1 degrees rotation (the so-called magic angle) at sufficiently low temperatures, superconductivity appears in twisted bilayer graphene. Could something similar happen in other materials?

In recent years a new field of study of this kind of 2D materials has come of age: twistronics. Twistronics is the study of how the angle (the twist) between layers of two-dimensional materials can change their electronic properties. When two-dimensional crystals are brought into close proximity, their interaction results in the reconstruction of the electronic spectrum and the crystal structure. Such reconstruction strongly depends on the twist angle between the crystals, and at certain values of this angle new interesting electronic and optical properties arise in graphene and transitional metal dichalcogenides. A rotational control has allowed the observation of long-lived excitonic states, resonant tunnelling and highly correlated electronic states, including, as we mentioned before, superconductivity.

Since the discovery of graphene, a wide diversity of atomic-layer-thick, two-dimensional materials with varied properties have emerged. Of particular interest is hexagonal boron nitride (hBN), one of the most used crystals for engineering van der Waals heterostructures. hBN is a wide-band insulator isoelectronic to graphene and has also a honeycomb lattice, in this case formed by alternating nitrogen and boron atoms with a strong polar covalent bonding between them, but in contrast to the semi-metallic graphene, its band structure presents some characteristics that makes it particularly attractive for applications in microelectronics, either alone or in combination with other 2D materials, such as, well, graphene.

Like in the case of graphene, atomically thin crystals of hBN can be obtained through exfoliating the bulk material. The twist-dependent electronic properties of hBN have been overlooked so far, though. Now, a team of researchers has studied 1 two insulating crystals of hexagonal boron nitride stacked at very small twist angle, less than 1º. 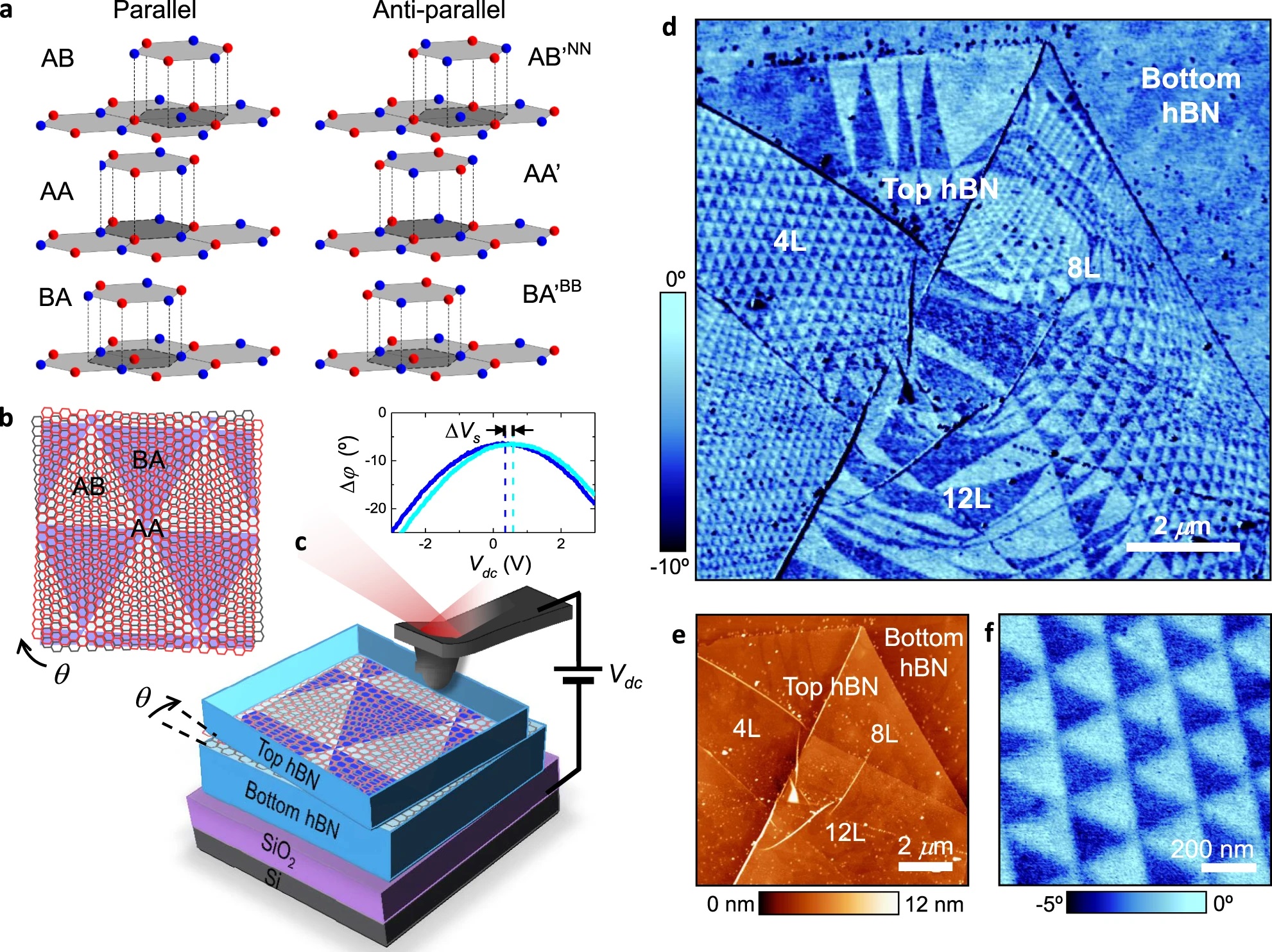 Very recently, ferroelectric-like charge polarization has been observed on bilayer-graphene/hBN superlattices. The researchers explored experimentally the possibility of generating a spontaneous charge polarization with the moiré superlattice of two twisted hBN crystals—without graphene. They demonstrate that hBN crystals placed at an intentionally small (‘marginal’) twist angle create a superlattice of charge-polarized macroscopic domains confined to the interface.

Using electrostatic force microscopy, ferroelectric-like domains arranged in triangular superlattices with a large surface potential were observed. The result is attributed to interfacial elastic deformations that result in out-of-plane dipoles formed by pairs of boron and nitrogen atoms belonging to opposite interfacial surfaces. This creates a bilayer-thick ferroelectric with oppositely polarized (BN and NB) dipoles in neighbouring domains

The system undergoes reconstruction into a periodic commensurate phase that results in a high density of polarized interfacial dipoles between the hBN layers at the interface, as measured by electrostatic scanning probe microscopy at room temperature. The researchers show that two dominant crystal alignments at 0° and 180° angle, referred to as parallel and antiparallel respectively, experience different reconstructions. Only the parallel alignment gives rise to ferroelectric-like domains, where aligned boron and nitrogen atoms at the interface layers create a dipolar field that reverses its sign in adjacent domains. These conclusions are strongly supported by calculations of atomic reconstruction and charge density in the interfacial layer.

The fact that a small twist angle between two insulating 2D crystals can generate a strong interfacial charge polarization of known amplitude and periodicity is an important addition to the arsenal of technologies for designing van der Waals heterostructures.