The advent of on-surface chemistry under vacuum has vastly increased our capabilities to synthesize carbon nanomaterials with atomic precision. Among the types of target structures that have been synthesized by these means, one-dimensional graphene nanoribbons (GNRs) have probably attracted the most attention, and for a good reason: the enormous tunability of GNRs’ electronic properties is extremely promising for next-generation nanoelectronic and optoelectronic devices.

GNRs, strips of graphene with ultra-thin width (<50 nm), are very interesting structures – including benzenoid ones and non-benzenoid sp2–hybridized carbon backbones, as mentioned, due to their attractive electronic properties. Those properties vary dramatically with changes in the nanoribbon’s atomic structure in terms of width, crystallographic symmetry, dopant heteroatoms, and edge termination. Interestingly, the electronic properties can be modulated even further by the appropriate design of GNR heterostructures.

Preliminary devices based on GNRs of various widths and armchair-oriented edges (aGNRs) have already been demonstrated, such as field-effect transistors. This is possible because in benzenoid nanoribbons with armchair-oriented edges, the lateral confinement of charge carriers causes the opening of a bandgap in graphene’s originally quasi-metallic band structure. The bandgap is strongly width-dependent, and five-atom-wide armchair GNRs (5-aGNRs) are particularly suited for such applications due to their low bandgap value. 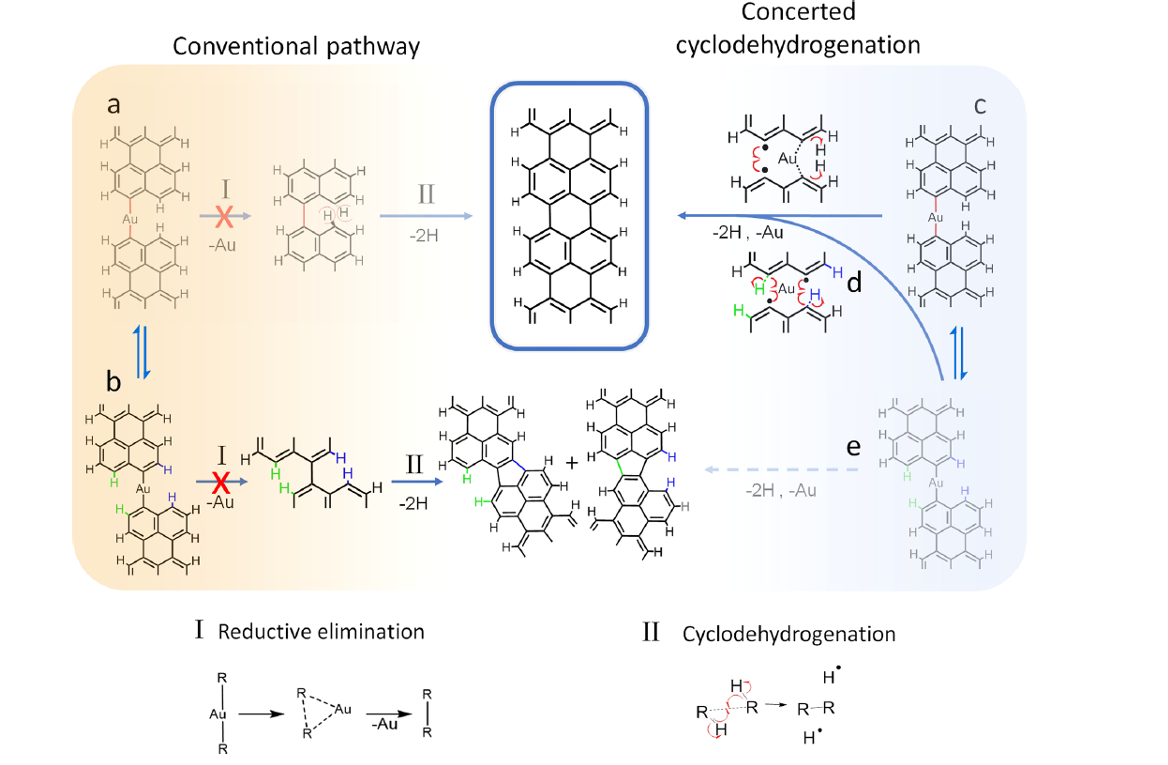 When the GNR synthesis is performed under vacuum, the most extensively used protocol employs the Ullmann-type coupling mechanism followed by cyclodehydrogenation reactions on the surface of noble metal substrates, most commonly Au(111). The cyclodehydrogenation step normally displays a larger activation barrier, which requires substantially higher temperatures. Now, a team of researchers has studied 1 the growth process in the synthesis of 5-AGNRs and found out relevant differences as compared to other nanoribbons.

To date, two different types of reactants have been used for the synthesis of 5-AGNRs. The first one is a tetrabrominated precursor, which does not require the cyclodehydrogenation step to form the final product. The second reactant is a mixture of isomers of dibromoperylene, which is the one the team focused on.

In line with most other GNR precursor molecules explored to date, the mixture of dibromoperylene isomers requires cyclodehydrogenation processes for the ultimate ribbon formation. However, the researchers discovered that the growth process does not follow the conventional reaction pathway consisting of halogen activation, polymerization, and subsequent cyclodehydrogenation.

By means of bond-resolving scanning probe microscopy techniques and temperature-dependent X-ray photoelectron spectroscopy, it becomes apparent that the dibromoperylene reaction on Au(111) starts with the formation of a metal−organic (MO) intermediate, followed by a double C−C bond formation involving a concomitant cyclodehydrogenation reaction. This mechanism translates into surprisingly regular graphene nanoribbons despite the atomically inhomogeneous side terminations of the precursors.

These findings may help understand the chemical processes followed by other reactants, and predict the product structures from other rigid and planar halogenated precursors.