Graphene nanoribbons (GNRs), are strips of graphene with ultra-thin width (<50 nm). Graphene ribbons were introduced as a theoretical model by Mitsutaka Fujita and coauthors to examine the edge and nanoscale size effect in graphene.

However, the high susceptibility of those properties to minimum changes in the GNR structure also indicates the stringent need for atomic precision in GNR synthesis. With the advent of bottom-up synthesis, increasingly high hopes are being placed on this approach, but the field is still in its infancy. Defect-free GNRs can be bottom-up assembled by on-surface reactions of molecular organic precursors over a metal surface.

This technique can produce ribbons with armchair or zigzag edges, intermediate chiral alignments, as well as tune the ribbon’s bandgap by proper selection of the shape of the organic precursor. Actually, although a large pool of GNRs with different edge orientations, widths, or heteroatoms (and heterostructures) should be possible, only a few GNRs have been successfully synthesized with the required selectivity and precision so far. In this way, GNR heterostructures have been constructed by combining precursors of different width or with substitutional heteroatoms.

To date, the most widely studied nanoribbon is the GNR with seven dimer lines across its width (7-AGNR) that grows from 10,10′-dibromo-9,9′-bianthracene (DBBA) in a multistep reaction, including dehalogenation, polymerization (also known as Ullmann coupling), and cyclodehydrogenation.

The versatility of this on-surface chemical toolbox paves the way for the atomically precise growth of hybrid GNRs with active elements for becoming operational nanodevices. Such elements are quantum dots.

A quantum dot is a nanometric crystalline structure of semiconductor materials. In a quatum dot electrons are confined in a region of space, thus creating a well defined structure of energy levels that depends very much on the size and shape of the quantum dot. This structure resembles that of atoms, that is why sometimes quantum dots are also called artificial atoms.

Quantum dots embedded inside a GNR may turn it optically active for luminescence when electrically powered through the terminal GNR segments. The construction of such hybrid devices requires a precise technology to create confining barriers for electrons inside the nanoribbon.

Now, an international group of researchers, including members of CFM (CSIC-UPV), CIC nanoGUNE and DIPC, shows 1 that the insertion of a pair of substitutional heteroatoms in the interior of the ribbon backbone produces very efficient confining barriers for electrons, which lead to quantum well states in their valence band. 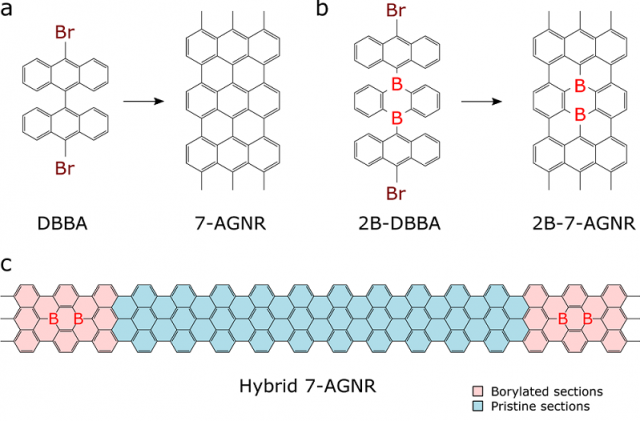 The researchers produce these hybrid GNRs by adding a small amount of boron-substituted precursors (2B-DBBA) during the on-surface reaction of DBBA molecules to get 2B-7-AGNRs, and show that the small amount of 2B substitutional subunits give rise to quantum-well states due to electron confinement in the region between two 2B sites. The boron pair units act as local scatterers for one of the two valence bands of the 7-AGNR while leaving the other unaffected. First-principles calculations on a free-standing hybrid 7-AGNR qualitatively reproduce the experimental results.

The presented bandselective procedure to manipulate only some bands envisions embedding functional devices in GNRs while transmitting charge through other unaffected bands. Furthermore, these results indicate that the substitutional doping of conjugated conductors with heteroatoms goes beyond a simple charge doping model and can be a method to manipulate bands’ wave function and transport channels.