In spintronics, new memory and logic devices are being developed based on the use of spins of nuclei, atoms, or molecules, instead of electronic charges. The main advantages are an improved energy efficiency and speed of operation to store and process information. The ability of organic molecules to maintain magnetic multistability in nanoscale junctions will determine their role in downsizing spintronic devices.

When talking about molecules, “open shell” signifies that there are unpaired electrons. In terms of molecular orbital theory, it means that some molecular orbitals are singly occupied. Organic open-shell compounds are extraordinarily attractive materials for their use in molecular spintronics. Now a team of researchers presents 1 a simple and straightforward method for the on-surface synthesis of open-shell porphyrins. This works appears on the cover of J.A.C.S. 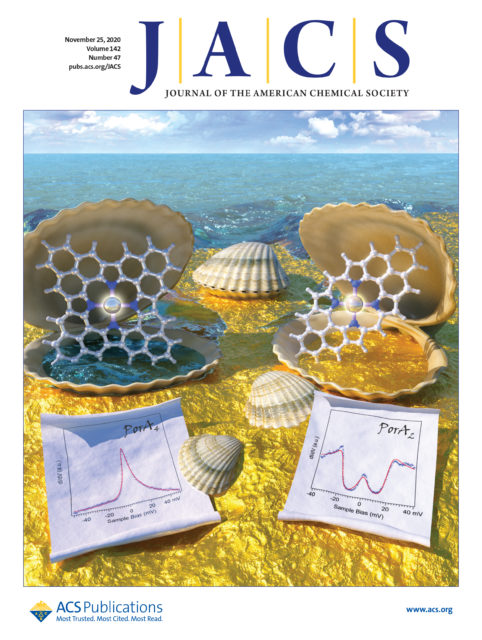 Porphyrins are organic pigments characterized by the possesion of a cyclic group of four linked nitrogen-containing rings called porphyrin, the nitrogen atoms of which are often coordinated to metal ions. Thus, they are tetrapyrrolic macrocycles with a planar structure and an aromatic circuit of 18 π-electrons. Porphyrins differ in the nature of their side-chain groups. They include the chlorophylls, which contain magnesium; and haem which contains iron and forms the prosthetic group of haemoglobin, myoglobin and the cytochromes.

Many of these properties can be precisely tuned through chemical modifications, such as the complexation of metal ions or the modification of number and nature of the peripheral substituents. Among such structural modifications, the π-extension of the porphyrin core is particularly appealing, since it leads to compounds with a strong near-infrared absorption.

These π-extended porphyrins can be obtained either by attaching other aromatic units to the macrocycle via conjugative linkers or through the fusion of aromatic units via intramolecular oxidative coupling. However, the vast majority of these systems presents a closed-shell character.

Very few examples of inherently open-shell porphyrins have been reported, which are typically obtained via an interesting yet poorly explored strategy consisting in the fusion of inherently radical polyaromatic hydrocarbons to the macrocycle. Among these hydrocarbons, non-Kekulé structures like phenalenyl – its smallest member – have been widely used as a building block. The synthetic access to phenalenyl-based structures is often hampered by multi-step synthesis, low yields, and poorly soluble intermediates and products, though.

On-surface synthesis stands as a promising alternative to prepare open-shell polyaromatic hydrocarbons systems, offering significant advantages over the more classical “wet” synthesis. The employed ultrahigh vacuum (UHV) conditions and the atomically clean, catalytic surfaces used, provide the ideal playground for both synthesis and characterization of structures that are hardly accessible through solution-based methods. 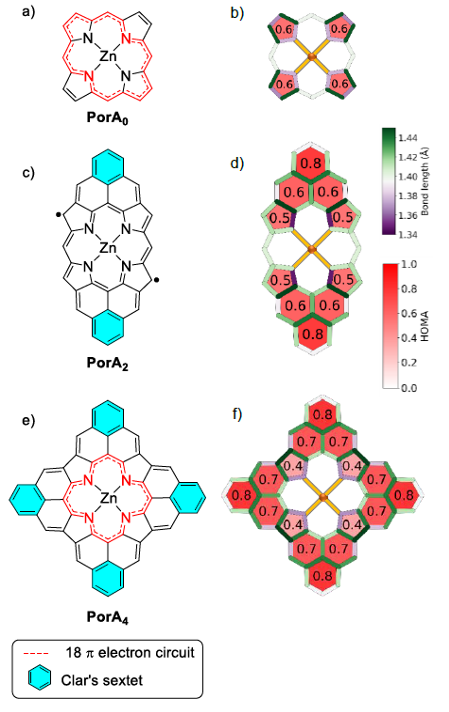 Now, a team of researchers present the on-surface synthesis and characterization of three Zn(II) porphyrins, with zero, two, and four phenalenyl moieties. While the one with no attachment was prepared by “wet” synthesis, the two- and four-fold phenalenyl-fused porphyrin derivatives were fabricated through a surface-assisted cyclodehydrogenation reaction from meso-2,6-dimethylphenyl (dmp) substituted precursors.

The the open-shell character for the two-fold derivative is demonstrated by DFT calculations and resonance structure analysis. For four-fold derivative, DFT calculations and resonance structure analysis both predict a closed-shell electronic structure. Interestingly, charge transfer to the underlying surface gives rise to an induced open-shell character to the intrinsically closed-shell derivative, as reflected by a characteristic Kondo resonance.

These results evidence a facile strategy to the formation of open-shell porphyrin molecules, a promising path for future molecular electronics and spintronics.